A retrospective look at fire in North Idaho

Fire is burned into Idaho history just as surely as the accomplishments of its people. 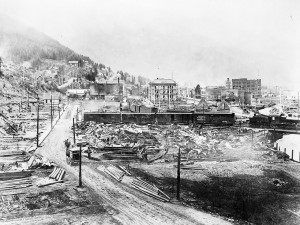 Wallace, Idaho in 1915, five years after the Big Burn. Library of Congress photo.

Since its foundation as a state and even beforehand, the Inland Northwest was prized as a treasure trove of natural resources. From its early history as a hunting ground for trappers to its transition into a region of timber communities, the region’s forest lands provided opportunity for untold numbers over the years. But with the opportunity came danger, and none more widespread or destructive than wildfire. As we’ve seen with this year’s historically destructive fire season, it’s a threat that no amount of technological progress can mitigate.

Idaho’s worst fire seasons throughout its history have, without exception, grown from several factors—most importantly, a hot, dry summer and the right combination of weather patterns. Under the right circumstances, the results can be truly devastating. There is perhaps no better example of this than the Great Fire of 1910, also known as the Big Burn, which ravaged North Idaho, East Washington and West Montana for two days, killing 87 people, devastating towns and reducing 3 million acres into cinder. Despite firefighters’ best efforts, it was only a cold front and steady rain that finally conquered the inferno, and the disaster in large part established the then-tiny U.S. Forest Service’s raison d’etre.

“You hear a lot about Wallace, but you don’t hear about the other areas around here that burned,” Dick Creed, who worked on the 1967 fire, said of the 1910 incident. “Sagle burned. Gold Mountain was on fire, too.” 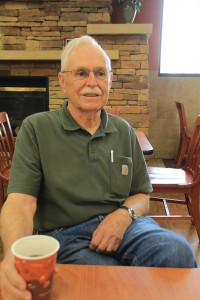 Dick Creed talks about his experience with the Sundance Fire in 1967. Photo by Ben Olson.

Still within living memory, the 1967 fire season, which included the famous Sundance Fire in addition to smaller blazes like Trappers Peak, provides a close analogue to the 2015 season. Both seasons the products of a hot, dry summer that turned forests into tinderboxes. Both pitted firefighters against infernos of surprising ferocity. Both blanketed the region in a thick smog of smoke. And both were only controlled through the efforts of an army of firefighters.

“Back in [1967], I think the conditions were even worse than they are today,” said Larry Stone, who worked for the U.S. Forest Service in 1967. “The smoke in particular was as bad, if not worse, as it is now.”

In all cases, Idaho’s historic fire seasons were characterized by the incredible speed of its growth. This year, the Cape Horn fire spread from initial reports on July 5 to a 2,000-acre disaster requiring evacuations within 24 hours. Similarly, powerful gales turned the several small fires in 1910 into the giant firestorm it became. And in the case of the Sundance Fire, a fire that worried no one created new danger and devastation in mere hours.

“The fire started on Sundance Peak,” said Creed. “It grew to 3500 acres real quick. Then we got a strong Palouse wind. I was working nights then. My wife woke me up to see this big column of smoke burning out upper Pack River.”

Stone, who worked for the U.S. Forest Service in 1967, recalls the amazing speed with which the Sundance Fire spread. Thought to be controlled on Aug. 29, 1967, the fire grew throughout the evening and overran containment lines. 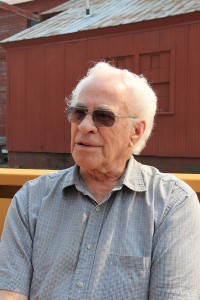 Larry Stone shares his experiences in 1967. Photo by Ben Olson.

By Sept. 1, the Sundance Fire churned through woodlands at amazing rates, growing from 4,000 acres to 55,900 acres within 12 hours, Stone said.

“That fire was really moving,” he added.

The speed caught everyone off guard. The sheer energy of the spread was astounding, firefighters remembered.

“They say the energy expended every five minutes on that fire was equal to the bomb at Hiroshima. A column of smoke went 30,000 feet into the air,” said Creed.

The fire also posed the greatest amount of danger anyone had seen from a wildfire in years. Two men were trapped by the fire and perished.

“They were caught on the west side of Pack River drainage,” said Creed. “One was a dozer operator. They were caught in a blowup. If you’re caught, you clear the ground and hide under the heavy equipment. That’s what they train you to do. You don’t want to lose anyone. It drove home the fact that this was a really dangerous situation.”

Stone remembers another, Randy Langston, who very nearly became a third casualty. Stationed at fire lookout, the young man, just out of high school, received radio instructions to leave his post and get picked up. When he found himself blocked off by fire, he had to bunker down in the wilderness before he was finally rescued the next morning.

“It was a very close call,” Stone said.

Creed worked as a night dispatcher, coordinating between eight to 10 buses during the Sundance Fire. He worked with multiple agencies throughout the ordeal.

“We had Native American crews that would come in,” he said. “Crow, North Cheyenne, the Flatheads. They had their own crews. They were very well organized.”

The comparisons between 1967 and 2015 are plentiful, firefighters said, but Creed sees some key differences in the firefighting strategies of today. The aggressiveness of the initial push against fire starts is probably the most prominent, he said. 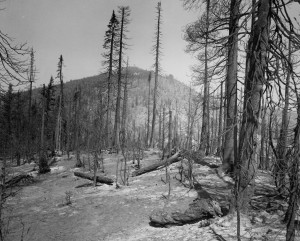 The aftermath of the Sundance Fire in 1967. Photo by Chuck Peterson, used by permission from Bonner County Historical Society.

“The change I see more of is that I don’t think they are fighting the initial fire as aggressively. Parker Ridge is an example. Also Scotchman. In certain weather conditions, if you’ve got a lot of moisture, letting it burn is a strategy. This summer is hot, dry, low precipitation, it may not be a good time to let things burn.”