A New Orleanian’s view of the city

I lie on my towel at City Beach, listening to Buffalo Springfield. Neil and the boys sound better suited here than anywhere else I’ve listened to them. Some feet from gulls lazing on a log, a youngish woman with dreaded hair snorkels in the water as her two sons play safely on land. Shore grit clings to my legs, fresh out of Lake Pend Oreille’s brisk water.

I sit up and look at the layers of mountains ahead and behind me. The clouds, bulbous and picturesque, traverse the peaks like thoughts past a meditating buddha. I breathe the air deep into my lungs and hold it there. Again. An insatiable desire for the atmosphere’s aroma. Pine: a scent locals probably acclimate to and take for granted. An olfactory illusion of perpetual Christmas. It’s the smell Hallmark stores use to ease their shoppers.

And it works. I’m utterly relaxed. I feel I could be a fixture here, in Sandpoint, ID, some 2,000 miles from my home in New Orleans, LA.

Idaho is one of those states I never hear about. Maybe people in the Pacific Northwest talk about it, but it’s a forgotten place in the South. Mention it and you’re countered with: “Potatoes?”

But it’s there, and it’s beautiful.

Up in the mountains, near Garfield Bay, where I’m holed up for the week at a friend’s home, the cellphone reception is awful, and I couldn’t be more grateful. There are yellow jackets like there are mosquitos back home, but all they do is tickle my feet and sniff me. I’m sure they sting, but I wouldn’t know it.

How can I be bothered by such minor matters when I’m surrounded by all this grandeur? Lake Pend Oreille seems more majestic than the Lake Ponchartrain of home’s swamps—maybe because the bordering mountains give the water elegant form. Not to hate on the edge-of-the-world vastness of Pontchartrain, which is lovely in its own rite, but this is something new, something that seems special. They say it’s God’s country up here, and I know a few atheists who liked my Facebook status describing it as such.

Is it God’s country because of the undeniably awe-inspiring landscape, or is it because there’s enough space between people for breathing room? Maybe it’s both. The visual evidence of creation by a greater force, whatever it may be. The expanse in which to sit, to breath, to think, to explore one’s own inner godliness. Whatever it is, it makes me smile.

If Idaho is forgotten in the South, then Sandpoint doesn’t even exist, but it very much does. For some homeowners here, it might only happen for the summer. For others, it’s a year-, life-long affair. I’ve seen and met all sorts here. Hippies, outdoors(wo)men, intellectuals, ex-Mormons, amateur thespians, hillbillies (and I say that with the utmost adoration), white-collars of various age, young skateboarders, the nondescript walker, restauranteurs, farmers, craft beer brewers, musicians, cowboys, artists, socialites and tourists, like myself.

Whatever they are, I find they say hello more often than they don’t. I had a lunch at Bricks and Barley, just after my visit to City Beach, where the employee who sat me treated me like a person and not just a potential tip. He asked me how my day was, what I was up to, where I was coming from, why was I visiting, would I like a beer. My waitress wasn’t any less personable, always smiling in a way that told me she wanted to smile. I know it’s these people’s jobs to be nice, but I come from the Land of Service Industry and Southern Hospitality, and the workers of New Orleans could take note. 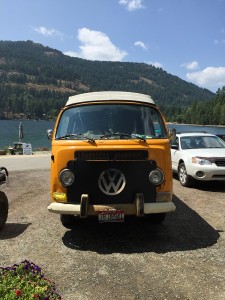 A Volkswagen Bus parked outside of Odie’s at Garfield Bay. Photo by Ferris McDaniel.

The day prior, I stopped into Serv-A-Burger because I’m a glutton for simple, low-priced burgers and shakes in joints where the most modern fixtures are the lightbulbs. I paid for my Double Jr. cheeseburger, onion rings and huckleberry shake (which was delicious, no wonder y’all are obsessed with this berry) with a credit card. I didn’t have cash, but I didn’t see a space for a tip on my receipt.

She laughed. “It’s the thought that counts, right?”

It was a trigger for instant good mood. No stink-eye. No automated response. No nod to the cash tip jar. Just good vibes.

Perhaps the down-tempo speed of life allows for an easier exchange of humanity between people. Perhaps it’s the nearly perfect weather that keeps people smiling. Perhaps it’s the cleanliness of the streets, the quality of the beer or, in my mind, the state-of-the-art public library. It’s almost definitely the multitude of opportunities for hiking, swimming, fishing, boating, biking, strolling, and losing oneself in the woods in an organized manner. All under a brilliant sun, hugged by gentle breezes. Whatever it is, it’s contagious, and I started waving and nodding and smiling—like it was second nature—at every person I passed.

Of course, Sandpoint has its pitfalls like every other place. 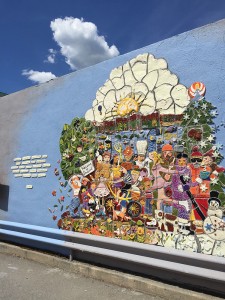 The public art mural outside of the Post Office. Photo by Ferris McDaniel.

If you’re looking for nightlife comparable to that of New Orleans, Manhattan, Austin, etc., then you’re probably not interested in a full-time situation in Sandpoint. There are fun spots like MickDuff’s and Idaho Pour Authority, and I saw an excellent performance at the Panida Theatre, but beyond this, nightlife seems scarce. This is a town where you set with the sun because tomorrow is another day—emphasis on day—of activity. If you’re over the party scene, then Sandpoint could be the spot for you. I imagine it’s a wonderful place to come of age and to watch your children do the same.

Coming from New Orleans, a port city of mixed nationalities, Idaho was noticeably uniform. There’s a lack of diversity that some might argue isn’t a downside at all. I would, however, disagree. Diversity is the flavor of life, to quote the cliche. There’s a genetic reason incest doesn’t work (taboos aside) and thoroughbred animals eventually breed defective progenitors. Different walks of life and cultural backgrounds help a community grow by providing everyone with another slice of the pie called Life.

I know historically, people of color just haven’t existed in the area, but it’s the 21st century. Traditions are being broken. People are traveling away from their heritage and history. Equality is slowly winning (or so we’d like to hope), giving people of color the opportunity for wealth, mobility and more options in general. So the lack of diversity in Sandpoint makes me wonder: why? Maybe it’s just not where they want to settle. Maybe the cost of living is too high even for up-and-coming equality. Coming from a city that’s undergoing some heavy gentrification, I have to ask these questions. I think the people of Sandpoint owe it to society and to their already great city to ask them too.

Overall, Sandpoint was the perfect escape from New Orleans’ oppressively humid summer and the routine of my life there. By the end of my trip, I didn’t dread returning home and going back to work. I missed my home. Sandpoint and its membrane of nature had given me fresh eyes. I know Sandpoint locals know everything about their home I’ve only recently discovered, whether they’re conscious of it or not. The regularity of a place can turn it mundane. But I promise you, there’s nothing mundane about Sandpoint.

Breathe in that clean northern Idaho air. Rub your eyes and reopen them to the land’s beauty. Remember where you are, and smile. 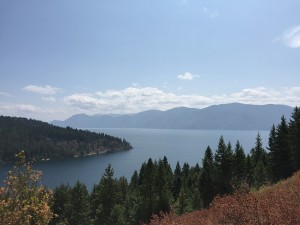 Ferris Wayne McDaniel is a graduate student in the University of New Orleans’ Creative Writing Workshop and works in hospitality at Bacchanal Wine and Spirits in New Orleans.