The Idaho Senate Education Committee voted Feb. 22 to approve proposed science standards in full, despite the House committee’s request to remove parts of the standards that mentioned climate change.

The Senate’s 6-3 vote to adopt the new standards in their complete form overrules the House’s request for edits because the proposed document is an administrative rule, not a bill. In order to make changes to proposed administrative rules, both panels must agree to those changes. 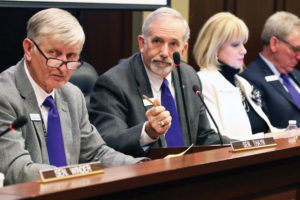 The new science standards will remain in effect for five years.

The Senate’s approval brings an end to a years-long effort by Idaho lawmakers to scrub mention of climate change from state curriculum. The current standards were brought forth by a cooperative of scientists, teachers, parents and students — led by director of academics at the Idaho State Department of Education Scott Cook — who testified several times for the inclusion of climate change.

During the thick of the debate in the last few weeks, Jim Barton, chair of Sandpoint High School’s science department, said he had concerns with the House’s hesitancy to include climate change in the standards.

“Science policy should be driven by the best scientific information available at the time, (and) written by those most qualified to objectively research, test and draw the most accurate conclusions from the data,” he wrote in an email. “These individuals are the scientists who are the experts in their field of climate science, not politicians with a poor understanding of climate science.”

Sen. Janie Ward-Engelking, a Democrat from Boise, said at last Thursday’s vote that the standards should be taken seriously in their complete form because they’d been written and vetted by the state’s best educators, according to the Idaho Statesman.

“I think it’s important to recognize that this content, not only the standards but the content, was written by our elite science teachers here in Idaho,” Ward-Engelking said.