A happening place: The Cedar Street Bridge is enjoying a boom of new merchants

A new golden age may be dawning for Cedar Street Bridge.

The building that spans Sand Creek has a storied history of ups and downs, but nothing in recent years matches the rebound it’s taken in 2019 under new ownership. With managers Shery and Scott Meekings given free rein to operate the Bridge as they see fit, the building has filled nearly all its vacancies in a matter of four months. 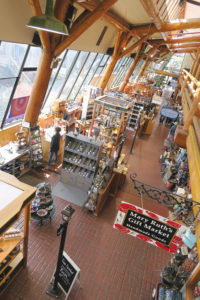 The Cedar Sreet Bridge from the second floor. Photo by Ben Olson.

“(New owner Jim Gissy) told us, ‘This is the kind of deal I live for. It’s a win for everyone. … I bought it on faith, and I’m so glad I did,’” said Scott Meekings.

The sheer variety of the businesses the Bridge will house this summer is impressive alone. Longstanding anchors like Creations, Carousel Emporium and Cedar Street Bistro are rounded out by the nutty confections of Panhandle Nut House, the artistry of Syndicate Tattoo Company and multiple gift store options. What’s more, the Bridge is slated to welcome some truly unique new offerings soon, including an arcade combining the fun of video games with food and drinks. The Meekings said its a great assortment of stores that should enhance the unique appeal Cedar Street Bridge holds for tourists.

“Most tourists tend to find this building, but I think we’re actually going to attract more locals in here too, because they’ll be curious to check the new businesses out,” Shery Meekings said.

Much of the shift toward proactively seeking new businesses came after Gissy, a Florida-based businessman and investor, purchased the property in December. He told the Meekings to run the building as if they owned it, so the couple set about doing just that. At the outset, Scott told Gissy that it would likely take a year or two to fill up the building. Just about everyone was blown away when the building was close to full in a quarter of a year. According to the Meekings, only one space remains available — and even that has offers on the table.

“It did not take very much to get people in here,” Scott Meekings said.

The Meekings said Gissy has been a pleasure to work with as an owner. He’s hands-off on the details but attentive where it counts. During sales negotiations, he spent days in Sandpoint meeting everyone involved in the Cedar Street Bridge, from the Meekings themselves to the business owners that fill the building. According to the Meekings, he is a good judge of character and knows when to delegate responsibility. But he’s also quick to act when a need emerges. For instance, even before the Cedar Street Bridge sale was complete, he contributed $10,000 to ensure the it was outfitted with Christmas lights. That helped the Bridge stand out during the holiday season, enhancing its reputation as a Christmas destination built through its numerous gift shops, The Little Christmas Store and special events featuring Santa Claus.

Ultimately, that’s what the Meekings hope to cultivate at Cedar Street Bridge: its reputation as an essential Sandpoint experience. After all, internet giants like Amazon simply can’t capture the fun and excitement of a retail destination with its own character and personality. And that’s something the Cedar Street Bridge has in spades.