‘The saloon will never come back’

It is a well known fact that Sandpoint’s early history was rough and tumble. When researchers excavated the original townsite on the Sand Creek peninsula preceding work on the byway, they unearthed nearly 600,000 artifacts — the largest archeological dig in Idaho history. What they found was evidence of widespread debauchery.

As reported in The Other Side of Sandpoint: Early History and Archaeology Beside the Tracks, which covered excavation and analysis from 2006-2013, opium and tobacco pipes “are very common in the Sandpoint assemblage,” as were huge amounts of alcohol bottles, jugs and alcohol-related items such as bottle openers, bottle caps, even an absinth glass and spoon. The presence of booze paraphernalia was so prolific among the artifacts that the inventory contains a completely separate object category marked “alcohol.” 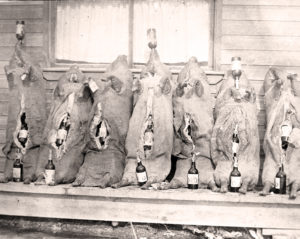 Whiskey bottles found smuggled in pig carcasses that were seized at the border during the Prohibition Era. Photo courtesy Bonner Co. History Museum.

This seedy state of affairs prevailed from the late 1800s until a series of raids and closures targeting the “Restricted District” on the east side of Sand Creek from 1906-1916. By 1921, nearly all the brothels, dance halls, saloons, opium dens, unsanctioned boxing rings and cockfighting pits had been closed as Sandpoint made its “bid for respectability,” as The Other Side of Sandpoint put it.

At the same time, public morals were front and center in both state and national politics. Idaho had long been a bastion of the anti-saloon movement, outlawing Sunday liquor sales in 1907 and passing a constitutional amendment barring all booze sales in 1917. In the meantime, Bonner County went voluntarily dry in 1913. These measures predated the Eighteenth Amendment, which extended the prohibition on alcohol sales and consumption nationwide effective Jan. 19, 1919.

Ratification 100 years ago touched off the so-called Prohibition Era, which lasted until repeal on Dec. 5, 1933 — 14 years during which organized crime flourished in service of the illicit trade in spirits. The country may have gone officially “dry,” but its citizens were as “wet” as ever thanks to the bootleggers who made sure the liquor flowed in spite of the Volstead Act.

To celebrate the repeal of the Eighteenth Amendment, the Bonner County History Museum is partnering with the 219 Lounge to host a Repeal Day Prohibition Party on Thursday, Dec. 5.  From 5:30-9:30 p.m. at the 219, step into a modern-day speakeasy with live music, prohibition-style cocktails, an exhibit, hot eats and general revelry intended to celebrate “the cocktails that were lost to… the great music that came out of… the iconic clothing worn during… and the mixed bar culture that resulted from… Prohibition.”

Use the password “coffin varnish” to order from the special menu, though admission is free for imbibers 21 and older.

A portion of proceeds go to support the museum, and as history shows, Sandpoint is the perfect place for a prohibition party. Far from the splashy mobsters of Chicago and New York, Sandpoint’s own history with prohibition was no less exciting.

Drawing from the sprawling archive of Sandpoint newspapers dating back to the 1890s and hosted online by the East Bonner County Library, it becomes immediately clear how central a place prohibition played in the life of the town.

In 1913, the pages of the Northern Idaho News featured heated debate over the efficacy of prohibition. An op-ed titled “Saloons vs Bootleggers” penned by Mrs. W.V. Dell offered a sophisticated analysis of how licensed sales could benefit local institutions whereas saloons destroyed morals and bootlegging brought with it all the evils of the liquor trade with none of its ancillary benefits.

In 1915, no less than town matron Ella M. Farmin wrote a letter to the editor in the Pend d’Oreille Review calling on the local press to help give prohibition “a fair trial” and “cultivate a sentiment for law enforcement in our community.”

In 1916, the Northern Idaho News carried another op-ed decrying the “prohibitoriness of prohibition,” which argued that while Idaho’s anti-liquor law was “the most Draconian … ever written into the book of laws,” it seldom went fully enforced. The next year, the Pend d’Oreille Review printed a story about the so-called “fighting parson,” Rev. MacCaughey, running for city council on a dry platform. While the editorialist claimed support for law enforcement, he or she also noted wryly that no one wanted to pay for it: “The city hasn’t a police power sufficient to ‘keep after bootleggers’ in the manner it would be necessary to keep after them to make Sandpoint ‘dry’ under municipal authority.”

Finally, with the Eighteenth Amendment firmly in place in 1919, the Northern Idaho News published a strident attack on prohibition, equating it with Bolshevism in its curtailment of rights and warning that moralistic legislation could be bent to serve anti-capitalist ends.

“[T]he precedent of prohibition will be found securely imbedded in the constitution of the United States to justify every measure of confiscation and every invasion of personal rights that predatory Socialism may decree,” the editorialist wrote.

“Lenine and Trotzky are ingrates indeed if they have not cabled their congratulations to the Anti-Saloon league.”

The headlines from 1900 to 1923 are filled with examples of bootlegging and public hand-wringing over what to do about it. Local characters like “Thirsty Tim” McCarty, a “lumberjack and general bad man”; “Chuck Slough Pete” Pearson; and Charles Dale, the “king of the bootleggers,” cut wide swaths through the newsprints. A search of the terms “prohibition,” “prohibitionist” and “prohibitionism” returns 2,318 results from Sandpoint newspapers dated 1900-1939.

Among the more dramatic tales to come out of Prohibition Era Sandpoint was the case of Bonner County Sheriff William Kirkpatrick, whose career as a lawman exploded in 1923 when he was arrested first for bribery and, upon further investigation, implicated as the ringleader in a complex scheme to rob a bootleggers’ train bound for Spokane and keep the spoils for himself and his associates.

In its Nov. 27, 1923 edition, the Northern Idaho News devoted several thousand words to Kirkpatrick’s trial in Coeur d’Alene, which painted a riveting picture of local corruption. As prosecutors successfully argued, Kirkpatrick conspired with his deputy, Ralph Decker (whose right middle finger had been “mutilated” by Mrs. James Folden when she bit his hand during a liquor raid at White’s Lunch in 1921) to steal nearly 100 cases of illicit liquor from a train as it stopped in Sandpoint for coal and water.

The midnight caper included handoffs and safe havens with bagmen at the Club pool house and the county jail itself — even a pair of country doctors and the sheriff’s own daughter. Decker served as courier and general lieutenant in the crimes, driving back and forth from the train to the jail, the Club, a secret staging ground south of the Long Bridge and an isolated spot past the slaughter house on the Dover highway.

Over the course of three days, Kirkpatrick and his several co-conspirators criss-crossed the area trying to dispose of their contraband, but things got serious when some Spokane bootleggers caught wind of the operation and attacked one of the booze cars where it sat — stuck on a stump — south of the Long Bridge. The violence didn’t sit well with Decker, as he testified, “I drove up town and drove around town and decided to wash my hands of the affair. I drove to the place where the other men were and told them of my decision.”

That didn’t sit well with the syndicate, as Len Ulrich — a German immigrant with a thick accent — threatened Decker that the members had “lots of money behind them and they would make trouble for him.”

Nonetheless, he confessed to the grand jury about the details of the crime, which led to Kirkpatrick being found guilty of conspiracy, sentenced to a year in jail in Kootenai County and a $1,000 fine.

In an opinion piece following the verdict — and amid Kirkpatrick’s refusal to give up his star, which he was forced to do by court order in early 1924 — the Northern Idaho News shook its head at the unrest prohibition had brought to Sandpoint.

“As long as it is so profitable there will be illicit traffic,” the paper wrote. “The prohibition law has extirpated some of the worst evils of the liquor business. But it has also brought some evils in its train.”

History has proved that to be an apt analysis, yet the paper made one somewhat iffy prediction: “The saloon will never come back, there is no chance that it ever will.”