A bridge too far

Activists have filed a notice of appeal against a state permit for a second railway bridge across Lake Pend Oreille. The Idaho Department of Lands granted Burlington Northern Santa Fe Railway a five-year encroachment permit on June 21. BNSF plans to construct 2.2 miles of doubled tracks, two temporary work spans, and a series of three permanent bridges: one each over the lake, Sand Creek and Bridge Street. The new bridges would be adjacent to the existing rail route across Lake Pend Oreille and downtown Sandpoint. 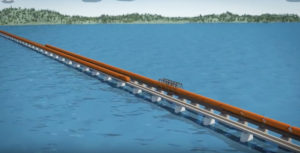 A still from a promotional video on the second rail bridge on YouTube by BNSF.

The notice of appeal was originally filed pro se, meaning activists — from Wild Idaho Rising Tide  — were representing themselves. The appeal contained procedural errors, but the judge granted an extension to file an amended notice of appeal and request for judicial review, which is due in early September. WIRT hired a lawyer to help draw up the amended appeal.

The activists are alleging that BNSF has been misleading in the process of gaining their permits, that they did not give citizens due process or input, and that they did not adequately consider “the state Lake Protection Act and Rules for the Regulation of Beds, Waters, and Airspace over Navigable Lakes.” WIRT activists questioned the legality of sidestepping these stricter state regulations, “in deference to an antiquated railroad land grant law.” The 1864 act, say the activists, gives railroad companies “unusual power to retain exclusive possession and ‘complete dominion’ over their 400-foot-wide, privately owned route ‘adjacent to and crossing Lake Pend Oreille.’”

In addition, says WIRT activist Helen Yost, the BNSF application for permits contains errors. She was reading through it and spotted incorrect math. “One simple math error tells me there’s other mistakes in there,” said Yost.

The math error she’s talking about falls on page 94 of BNSF’s Joint Application for Permit. In order to construct the new lake railway bridge, a temporary bridge to support cranes and heavy equipment must first be constructed. BNSF notes that this temporary bridge will need – by their math – 632 piles driven by pile-drivers at a rate of three piles per day. They state that this is estimated to take 46 days. However, 632 divided by three equals out to 210 days and change. Up to 700 piles may be needed, which would up the count to over 233 days.

You can hear pile-driving downtown, says Yost. Add the pile-driving required for the new lake railway bridge— 144 days of it, by BNSF’s count — and you have 354 days of pile-driving noise buffeting downtown Sandpoint, minimum. This is assuming that there is not more faulty math at play, and assuming no delays. Driving the piles “would generate surrounding, surface, and especially underwater noise extending over four miles northeast to Oden Bay and southwest to Dover, disturbing aquatic and terrestrial inhabitants, including osprey and the endangered species bull trout,” say activists.

In addition, pile driving would “release train-spewed, lake bed coal and other railroad deposits containing arsenic, mercury, lead and other health-risking compounds,” activists state. This could potentially be hazardous to the residents living and playing around Lake Pend Oreille. It would almost certainly pollute lake, river and aquifer water — water already polluted by four railroads, Highway 95 and a remediation site.

The pollution is not speculation. A 2015-2016 Idaho Department of Environmental Quality report on the lake water drawn by the Sandpoint Public Works Department noted that these four sources currently contaminate Pend Oreille with volatile organic chemicals and inorganic chemicals. Activists fear that the railroad will bring in more pollution and are concerned that the topic has not been adequately studied. They asked in their initial appeal that the topic be addressed before permitting rolls ahead.

There may be other safety hazards as well. Activists point out that erecting a temporary construction span to hold 100-ton to 250-ton cranes “would reduce horizontal clearances between piers from about 100 feet to 48 feet, restricting and confusing boat navigation, despite purported project alignment of most of the new and existing bridge piers.”

WIRT’s not buying the argument that BNSF is constructing a second bridge to help out the residents of Bonner County, says Yost. BNSF would not have paid its employees to show up at a May pre-hearing to support the project on the record if they were being fully above-board, Yost claims. Math is at play here again, she says. The project would cost an estimated $100 million. It would be financially foolhardy for BNSF not to create return on its investment by running as many trains as possible over the new bridge. Running more trains means more stopped traffic – not less.

It also means more potential for spills into the lake. Coal dust drifts over the sides of rail cars, even if there are not derailments, and it’s flammable. A neglected coal train spill combusted beside the Clark Fork River in September 2017. In an era when forest fires are a grave concern, coal-bearing railroad expansion is all the more worthy of evaluation.

WIRT activists say they are accepting donations to help pay for attorney and court costs for their amended appeal.