Trilobites, what are they? 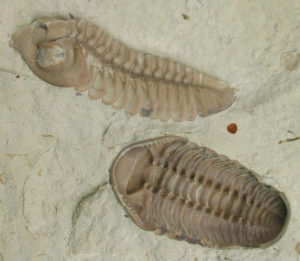 Why are they so important, you ask? Their bodies were heavily calcified which made them perfect candidates for fossilization. Trilobites remain some of the best preserved fossils we have to this day for that very reason, which makes them really easy to study.

The comparisons we’re able to trace between trilobites and modern arthropods helps us better understand evolution. Getting to see something from so far back, we’re able to see the building blocks of what animals would evolve to in our day and age. Just like our old photos, we get to see all of the embarrassing traits that didn’t work out, and when comparing them against most recent fossils we begin to understand when and why certain traits may have gone away.

Their preservation is so remarkable, that even 520-plus million years later, we’re able to identify the function of their anatomy and draw comparisons to modern arthropods with stunning accuracy. After all, 520 million years is a really long time. That’s over 10 percent of the Earth’s age and about half the time that life has been on Earth.

Trilobites were varied in their behavior and function. Some were ambush predators. Some were filter feeders. Some swam and some crawled. Whatever they did, they managed to have a global reach. We’ve found their fossils on every corner of the globe, which is especially important when we find them in places that aren’t ocean now, because it shows where oceans once existed on the surface of our planet. This helps us with all sorts of things, from understanding where life came from to where to dig for oil.

Just in case you didn’t know, oil comes from the fossils of ancient microscopic ocean-dwellers (mostly things related to algae and plankton). Over time, these innumerable fossils are pressed together with minerals into an inky emulsion, which we suck out of the ground, refine, then light aflame to generate energy. Trilobites may have fed on some of the stuff that would go on to make oil, though the trilobites themselves wouldn’t go on to become oil.

It’s interesting to think about how fossil fuel works. Hundreds of millions of years ago, these microscopic creatures would capture energy from the sun with photosynthesis. They’d store that as carbon, oxygen and hydrogen when they died and decayed. These molecules also stored the sun’s energy, which stays with them to this day. When you ignite their fossils, you’re releasing 500,000,000-plus year old sunlight for your own means. Of course, you’re also aerosolizing the carbon, oxygen and hydrogen. The carbon and oxygen (CO2) begins to coalesce and retain heat, like the glass of a greenhouse, where the term “greenhouse gas” comes from. Normally, Earth has systems in place to cycle that out and return it to the ground, but it’s being released faster than nature can use it to build trees.

One of the only ways we’ve observed for this trend to reverse is through massive volcanic eruptions that alter the climate globally for decades, or even millenia. While carbon normally retains heat, immense amounts of it to create haze and clouds (as we witnessed the past three summers from wildfires) will have the opposite effect and reflect sunlight, cooling the air, land and water below.

So why exactly did this turn into an inconvenient article?

Because that’s how we believed the trilobites went extinct. About 250 million years ago, something really big happened. The big three theories are a meteorite impact, massive global volcanism and/or global oil and coal fires. Whatever happened, the Earth got really hot, stuff burned like crazy, then it got really cold and 70 percent of all life on the planet died, including our buddy the trilobite. This is called the Permian-Triassic extinction event, and it’s the only extinction we’re aware of where insects began to die off almost entirely.

This did open the door for the dinosaurs, so I wouldn’t mourn the trilobite too much. Trilobites did, after all, have at least a 250 million year run. If we even get to half of that, I’d count it as a win.

Hominidae, which includes humans and great apes, have been traced back to about 20 million years, so only another 105 million to go!

If you want a modern ancestor of the trilobite, I hate to disappoint you, but there are none. Unlike some extinction events, it didn’t just end up evolving into something else over time. It appears they were completely wiped out. The closest you’ll come now is the horseshoe crab, which isn’t actually related, but still looks and behaves similarly.

Whether through some special trait of adaptability or unfettering gumption, trilobites left their creepy crawly mark on the world, and paleontologists thank them for it. The next time you’re at a museum and you pass by that boring crab-looking thing, maybe stop and linger for a minute. Ponder at how miraculous it is that you get to witness a high-definition snapshot into the distant past, before mammals, before reptiles, to a time when the gas in your car was alive and living a life not unlike yours: eating, breathing, replicating.

At least your day doesn’t end with being eaten by some freaky crab-looking thing.