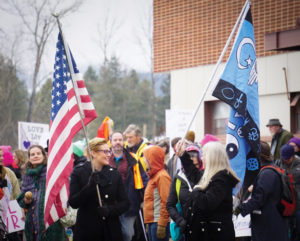 The latest local iteration of the mass protest movement that has taken millions to the streets, the Women’s March was a celebration of 2018’s historic number of wins for female candidates. Even so, speakers acknowledged that there’s still plenty of work to be done.

Rebecca Cleveland-Schroeder, a health care advocate and 2018 candidate for the Idaho Legislature, spoke about the state passing Medicaid expansion by a significant 60-percent threshold of support. She said it is now the Legislature’s responsibility to fund the expansion without hurdles, because ultimately, calls for more equitable health care, education and worker compensation are not radical requests.

“We cultivated an overwhelming majority of support for (Medicaid expansion),” she said. “We ventured into that territory because it was worth it for what was at stake.”

Next, Sandpoint High School student and Cedar Post editor Corinne Capodagli focused her message on the importance of inclusion and acceptance. She said a society is only healthy when all are allowed to contribute their voices.

“I think it’s important to assess the meaning of this rally … and our incentive should be to empower all voices,” she said. 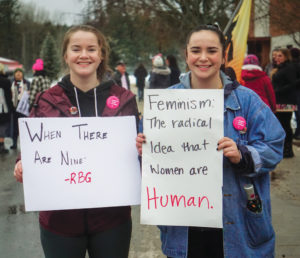 Dr. Ryanne Pilgeram, the 1999 SHS valedictorian and associate professor at the University of Idaho, wrapped up the rally before the march as the keynote speaker. She acknowledged how Idaho’s history is defined by oppression, first against the native peoples and then against the working class by timber and railroad barons. In response to brutal circumstances, these marginalized groups forged the modern Idaho through radical, progressive values, Pilgeram said. For that reason, she believes that residents of all political stripes belong in the state.

“One of my pet peeves is when people say that if you’re a progressive or you’re a liberal, you don’t belong in Idaho,” Pilgeram said. “That is baloney.”