2018 Sandpoint Film Festival is better than ever

Sandpoint Film Festival started nine years ago presenting short films for a one-day festival. SFF is a nonprofit organization started by Janice Jarzabek in an effort to present high-quality short films from around the world. 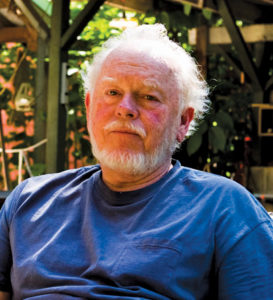 Dan McCann, right, a Sandpoint filmmaker who passed away this year. Photo by Lee Santa.

Sandpoint Film Festival takes place on Saturday, Nov.3, at the Panida Theater. This year’s program consists of 41 films, 20 minutes or shorter — all picked from about three thousand submissions from around the globe. Besides several films from the U.S, the films originate from countries as diverse as India, Spain, Algeria, France, Syrian Arab Republic, Norway and many others.

This year’s festival has added the screening of a couple of feature documentaries. “How to Defuse a Bomb” will screen on Thursday, Nov. 1. It tells the story of Project Children who in the ‘70s brought both Protestant and Catholic children to the US to escape the violence in Northern Ireland. “Skid Row Marathon” screens Friday, Nov. 2, and tells the inspiring story of how a criminal court judge started a running club on L.A.’s skid row where he trained a motley group of homeless people to run international marathons. Both films will screen at 7:30 p.m.

On Saturday night we will also pay tribute to Dan McCann, a local filmmaker who sadly passed away this year. We will screen his “Caviar and Corn Dogs,” a lovely short film about Sandpoint that Dan made a few years ago.

The primary goal of the festival is to find the films that excel in telling a story, whether it is in a narrative, documentary or animation category. We selected films that contribute to the art of filmmaking through telling compelling stories and presenting issues that are important to us as human beings in today’s world. They also give us a window into that same world by showing other cultures, lives and environments that are important to us in recognizing our similarities rather than our differences.

Among the many superb films are a film from Germany about the fear of deportation and a documentary from the U.S. about the challenges facing Latino women in this country. A French film looks into the future where roles are reversed – Europeans are the refugees trying to find asylum in Africa. A film from India tells the heartbreaking story of a young boy and his school bag. There are amusing comedies from France, Spain and Australia. An Italian film explores the subject of people’s indifference to tragic incidents. A Norwegian animated film is about oil and greed and a film made by a 15 year-old girl in California covers the subject of gun violence in schools.

An Arab woman filmmaker living in the U.S. tells the true story of a young boy surviving a bombing attack in Syria and “The Lesson” deals with subject of ethics and exploitation in corporate business dealings. In “Marylin Lights” from India two ex-lovers reminisce about the past. An American film tells the powerful story of a Vietnam veteran seeking a full-filling life as a trans-gender person and a French film follows an Algerian woman trying to re-connect with her French father.

There will be a pre-production party at Trinity at City Beach Friday, Nov. 2, from 4:30-6 p.m. Saturday morning starts with Filmmakers Coffee at Creations on the Cedar Street Bridge at 9 a.m. The Festival films are presented in three blocks starting at 12 p.m. The second block starts at 3 p.m. and the third at 6 p.m. The festival concludes with a Post-Production Party at Trinity at City Beach lounge starting at 9 p.m.

The price of admission to the festival is $7 per block or $20 for an all access pass. Advance tickets are available at www.panida.org or through Sandpoint Films at (208) 290-0597.

Janice Jarzabek, Erik Daarstad and Bernice Webb work together as an all-volunteer board. Rob Lindner downloaded and prepared the films for screening. Eric Ridgway will host the event. Cafe Trinity, Best Western and Elsaesser Jarzabek Anderson Elliott and Macdonald have sponsored the festival since 2010.

Erik Daarstad is an Academy Award winning cinematographer who lives in Sandpoint. He is also a film lover.