Lessons from an elk hunter

•Your gas tank should always be at least half full

•Pack your rifle with the scope tucked under your armpit

These are just a few conditions that come with being raised by my dad.

I was reminded of the last one this past weekend while elk hunting with him and my boyfriend, Alex. I listened as my dad, in his woods-whisper, told Alex — who typically packs his rifle slung over his shoulder by the strap — all about how he should consider tucking the scope under his arm. 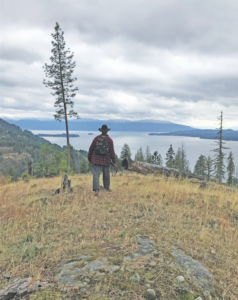 Travis Kiebert navigates his way to a hunting spot near Hope, Idaho. Photo by Leslie Kiebert.

“Holding it that way, you might get a wet leaf over the scope, or some other crap. Plus this way you’re ready to shoot somethin’,” Dad said. “But it’s up to ya. That’s just the way I taught those guys,” he said in reference to my sisters and me.

I suppress a cringe when he gives my boyfriend pointers — ‘Dad, he’s a grown man,’ I say to myself — but Alex nodded. The next day when he and I walked the same skid trails together without my father, he packed the rifle the way my sisters and I were taught.

I guess sometimes by dad’s advice makes a lot of sense, and it helps when you haven’t been hearing it your whole life.

The three of us haven’t harvested any elk yet this season (just my sister, Leslie, who got her cow her first day out this season … lucky duck), but this time of year always reminds me that it’s not about the meat.

OK, it is. I’ve eaten a lot of chicken in the time since I finished my last package of elk burger.

But aside from the 300 pounds of wild game I’ll hopefully pack into my freezer in coming weeks, elk season takes me back to how I was raised, how hunting has shaped my life and my identity as a North-Idaho-raised gal.

One adolescent moment in particular brings to mind the seemingly small but profound impact this tenant of our culture had on me as a kid. I was about 16 when a cousin told me that a guy we knew — a guy I liked, no less — told him I couldn’t walk quietly in the woods. This guy and I had gone on a scouting hike a few weeks back, and while I knew I’d cracked a couple cedar limbs, I was positive my dad raised me to pick the soft spots of dirt and pine needles to drop my boots and I was good at it.

This instance probably falls best under the category “rural kid problems,” but I’ll never forget how hot my face became, how embarrassed I was. How could he say that? And more importantly, I hoped he wouldn’t tell anyone else.

That story came to mind last weekend while traversing elk country with Alex, and I thought, “I wonder if he thinks I walk quietly.” Just as the thought passed, Alex lost his footing, which resulted in the deafening crack of a branch no thicker than my pinky. He turned around, rifle tucked under his arm, eyes wide, and grinned sheepishly at me while I stifled laughter.

For the rest of that hunt, between navigating brush and discerning whether that sound I just heard was an elk or a falling birch leaf, I contemplated what it really means, to me, to hunt elk in North Idaho.

To hunt is to pay homage to the people before you: I pack my great grandfather’s gun, my grandpa started the skid trails I now walk and my dad kept the game trails clear of low-hanging pine boughs long before I was born. To hunt is to pay the utmost respect to the animal that becomes your food, seeing it through from life to death, butchering, grinding, packaging and freezing. To hunt is to practice a necessary tradition and lifestyle.

I might roll my eyes when my dad recounts his gun-packing advice, and I might still be pissed about that rumor about my lack of quiet feet in the woods, but the picture is a lot bigger to me now.

I feel fortunate to have been raised in the practice of harvesting my own meat, and can’t wait to show my kids how to pack a rifle so you won’t get a wet leaf over the scope, or some other crap.