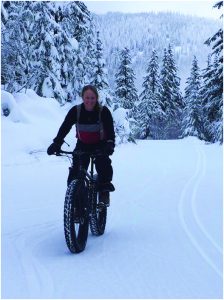 Years ago Dr. Jaimie Lusk was working with a patient battling severe depression. “You know,” she said, “I used to feel like you, until I sold my car and started bicycling over 20 miles a day.”  Her patient responded with, “You are crazy!”

Dr. Lusk currently works at the VA in Portland, Ore.  She knows that in long-term studies, consistent exercise has far better results than pharmaceuticals in healing mental illness. Recently she ran an ultra marathon in the Cascades, excelled at surf camp in Costa Rica and won an amateur mountain bike racing series surrounding Portland. She has always been active and has cultivated a happy life.

At her college (United States Naval Academy) graduation in 2001, Lusk shook President George. W Bush’s hand. During her 30-day leave, she cycled across the nation, averaging around 110 miles a day. She got her feet wet in the Pacific Ocean in Oregon and ended up running barefoot in the Atlantic Ocean in New York a month later. When war was declared in the Middle East in 2003, she was a Marine Corp officer in Kuwait.

After being a veteran of war, Lusk landed in Colorado where she was a public school teacher and a bike messenger, delivering packages all over Denver.  In 2007 she won the “Bike Messenger world championships,” in Ireland.

She went back to college to receive her doctorate in psychology with the GI Bill scholarship where she graduated at the top.  Throughout her studies and career Dr. Lusk has done extensive research on PTSD, a wide range of mental illnesses and suicide: What causes them, how to prevent them and what tools help people cope and build a healthy life.

I have read and believe to be true(for me personally) that we get what we need in this life. I can admit I needed a psychologist sister in this lifetime. Often I have turned to my sister, Dr. Lusk, for support, and she has offered me tools on coping and communicating. She is good at helping me breathe past shame, into a new day.

Over a year ago, while my Dad and I drove to my sister’s apartment, we called her when she got off work, but she was curt with us and hung up promptly. That 20 minute walk down the hill from the V.A. was her stress-free fresh air, her sacred quiet. We hadn’t seen her in months, so her curtness stung, but her excuse caused me to understand her situation, her Friday workday.  “Look,” she explained. “I have spent the last four hours talking down two suicides. I need some time to breathe.”

Occasionally Lusk is haunted by symptoms often referred to as “compassion overload” resulting from her overwhelming and difficult caseload requiring enormous amounts of compassion. Instead of referring to them as “patients,” Lusk calls them “my vets,” and she sees 20 of them individually per week.  All of them are younger than middle-aged, and a third of them are women.  She also has group therapy with 15 people weekly.  All of her vets require extensive paperwork.  If all this weren’t enough, she truly does care and takes the vets’ stories home in her heart.

With “compassion overload,” Lusk is learning to set boundaries.

“I am not sure I have a great strategy,” she said. “There are more veterans that need help than I am able to work with. I attempt to be as just as I possibly can, triaging everyone I assess based on the severity of their distress, and how helpful I think I can be to them. If I don’t think I can be helpful, I am committed to getting them where they need to go. I also need to keep reminding myself of my own limits. Showing others compassion is only sustainable long-term if I am showing myself compassion. Finally I need to stay humble. No way I can figure out what others need to do; I just have some tools I continue to develop that I can use with people to help them find their way.”

“Once individuals can begin to revisit and make sense of their trauma, they might need to mourn what was lost, reclaim the values that were violated in the trauma, make restitution, and discover ways that the wound of trauma can be transformed to wisdom,” she continued. “In the VA, we have begun to treat Moral Injury, which is related to PTSD, but has to do with the values that were violated in the trauma, leading to intense feelings of guilt, shame, anger or resentment.”

Trump getting elected has frozen hiring for essential positions, but Lusk said her work hasn’t changed yet.  “No mental health jobs have been taken away,” she said. “The secretary of the VA knows what he is doing. We are not panicking yet.”

There has been talk of privatizing veteran’s care, but the threat of doing away with VA hospitals is a frightening one.  The behavior of some vets receiving treatment for mental illness might land them in jail if acted out in an ordinary private hospital setting, resulting in further stress and damage. The VA hospitals, however, are very equipped and understanding of outbursts resulting from mental illness.

“I think the VA and vet centers are doing great work, we just can’t keep up with the demand,” Lusk said. “Once a veteran gets where they need to be in the system, they get the help they need. I think it can be hard for veterans who are hurting to advocate for themselves and stay patient while navigating the system.”

Cycling is still a potent medicine in her life.  With an apartment full of bicycles, one of the only places her boyfriend and her can sit down is on the tandem on trainers.  They are training for “bicycle built for two” nationals in June.