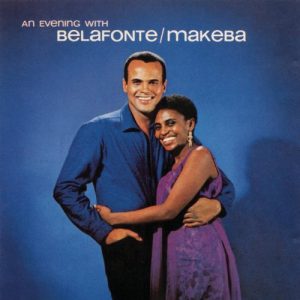 What do Harry Belafonte and Miriam Makeba have in common other than a Grammy Award-winning collaborative album from 1965? A long-lasting friendship and a sense of purpose in their lives that could make just about anyone envious. In fact, you could argue that Belafonte and Makeba have accomplished so much in their lifetimes that it unfairly raises the bar for the rest of us to a grossly unattainable level and makes us somehow feel unworthy. That’s certainly one way of looking at it. But I choose to see it as an inspiring tale of the human potential and just what we are capable of if we turn off our televisions and get out in the world, strive to correct injustices, and use whatever talent we have to create something beautiful and everlasting.

They reached so many people—from blacks growing up in America and Africa to world leaders like Martin Luther King, JFK, and Nelson Mandela—and the ripple effect of their live persists today. Don’t believe me? Here’s an example from last summer’s Festival At Sandpoint: If you were lucky enough to see Angelique Kidjo, you may recall a mysterious introduction to one of her songs that went something like, “this next song is by a woman who, if you don’t know who she is, you all need to do your homework, people!” I got a little goose-bumpy because I knew who she was referring to. You see, Angeilque Kidjo, who is herself an activist and humanitarian and has probably reached more ears than Makeba, considers Miriam Makeba her hero.

Makeba was born in Johannesburg, South Africa, and spent the first six months of her life in prison. (Her mother, who was a sangoma, or healer, was caught by the apartheid government making a kind of homemade beer from cornmeal, illegal for blacks.) Always fighting for justice, she died of a heart attack onstage in Italy in 2008, protesting the treatment of writer Roberto Saviano by the mafia. These are the bookends of her life. More important is the “dash” in between (in the Linda Ellis poem “The Dash,” the dash between the two years on our gravestones represents our entire lives. The poem addresses the relevance in the way we utilize this tiny symbol).

She’d been a singer since childhood, sang in several bands, and was for a brief time married to musician Hugh Masekela. But her protest songs raised the eyebrows of the South African government at the time. When Harry Belafonte (whom she referred to as her “big brother”) helped her get into the U.S. to reach a broader audience, she discovered that she could not return for her mother’s funeral in 1960 because South Africa had revoked her passport. She would be exiled from her homeland for the next 30 years, and her music was banned there. Her music did take off in the western world, however, where she was called simply “Mama Africa.” Suddenly she had record deals and even appeared on TV. She toured with the likes of Belafonte, Dizzy Gilespie, Odetta, Masakela, and later with Paul Simon on the Graceland tour. She sang in English, Xhosa, Swahili, Zulu, and Sotho (which further served to unite blacks in Africa). She was asked to perform at JFK’s birthday party, but left afterward, feeling ill. When Kennedy insisted on meeting her, Belafonte drove him over to where she was staying. She also performed for “The Rumble in the Jungle”—the famed Ali/Frasier fight in Africa. When Nelson Mandela was finally freed in 1990, one of his first requests was that Makeba return home, and she performed at many of the celebrations there, forging her friendship with Mandela.

Like Belafonte, she used her fame as a platform to affect social change. She fought for civil rights in America, Europe, and Africa (and was offered citizenship in 10 different countries). She acted on behalf of child soldiers, the physically handicapped, and those with HIV/AIDS. She was a Goodwill Ambassador to the United Nations, and later a delegate for Guinea. She was awarded the Otto Hahn Peace Medal and the Dag Hammarskjöld Peace Prize.

Perhaps the reason she is not as much of a household word in America as she is elsewhere in the world comes from her marriage in 1968 to Stokely Carmichael, a Black Panther activist. Even though he was the leader of the Student Nonviolent Coordinating Committee, Makeba found her record contracts drying up and she was soon boycotted in the U.S. Disgusted, they moved to Guinea in western Africa, where they continued to enrich people’s lives through music and service.

Miriam Makeba made so much of her brief “dash” here, but here’s my favorite: I was looking one day at the online reviews regarding one of her albums when I came across this tidbit from a South African woman. She wrote, “I used to listen to this album growing up in Soweto. The funny thing is, we listened to it full blast on our stereos, even though it was illegal and we risked imprisonment if we were caught. It was worth it!”