Far be from us, of all people, to remotely suggest impoverishing or even diminishing the English language, but some words — especially this year — we can’t wait to see the back of. We selected these words because of their rank partisanship and divisiveness, their blinkered anti-scientism and, in many cases, simply for their overuse. Believe us, we get just as sick of hearing (and writing) some of these words as you do. And there were many, many more we could have included in this list.

Regardless, here’s hoping for a better nomenclature in the year to come. 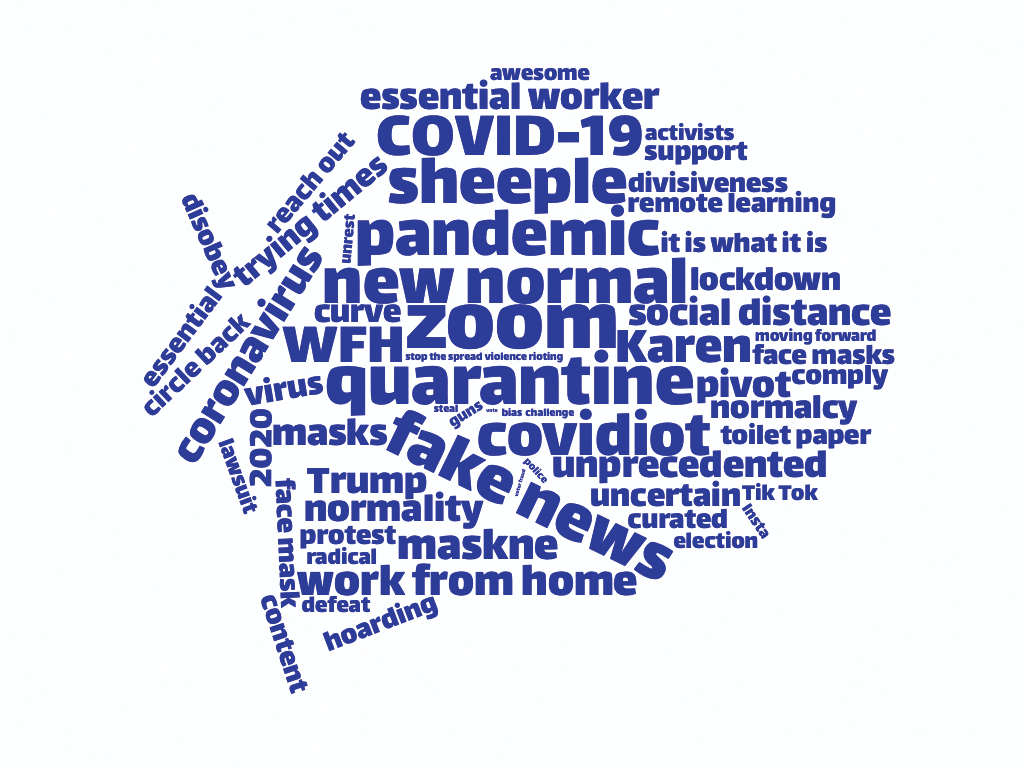 I get it that remote conferencing is an essential part of our “new normal” (see below), but I’m sick to the teeth of saying it. “Let’s Zoom”; “What time should we Zoom?”; “I just Zoomed with s/he”; “Come to my Zoom happy hour.” Aside from the ubiquitousness of this word right now, which is grating in itself, it just sounds so… silly. I feel the same way about Twitter and Tweet and Insta and FB and DM and Google and a host of other tech babble terms that sound like they came from the offices of Boss Baby. And, no, I don’t have an alternative; I’m just sick of Zooming to nowhere.

The only constant is change, people, so there is no such thing — and never has been — as “normal.” Suggesting that there’s a state of existence that is “normal” is dumb in the first place; to extend that into the notion that there can be a “new” version of such a state falsely chops up all human history into periods of discreet “normalness,” or “normalcy,” as too many people like to say. First of all, that latter word only gained popularity, if you can call it that, when one of the worst presidents in U.S. history, Warren G. Harding, uttered it in his 1920 campaign — promising Americans a “return to normalcy” after World War I. See how that worked out? As for “normality,” it just sounds like an awkward attempt to sound smart, like people who refer to Americans as “Usonians.”

This word does no one any favors. A cousin to the term “snowflake,” the moment this term enters a conversation that conversation is over. I’ll grant that it’s somewhat clever, and while I have no evidence of this, I’m almost positive it had its inception in the primordial ooze of Twitter; that is to say, it’s too cute by half. It’s also just mean. Think: “libtard,” and you’re on the right track to understanding how toxic this word is.

The shorthand for “work from home” needs to be abolished simply because the novelty of working from home has worn off. According to an October Gallup poll, about half of the American workforce does at least some of their job from home, and about two-thirds of remote workers plan to continue working from home. At this point, the qualifier is pointless — we are all just working. The “WFH” acronym was always off-putting and now essentially useless.

Acne caused by frequent mask-wearing is just an unfortunate reality made at least 10 times more unfortunate by the invention of a cute mash-up word to define it. I just know this one was born from the depths of beauty influencer Instagram hell. Grab some salicylic acid, treat those pimples and continue masking up — just keep the English language out of it.

I’ve cringed and rolled my eyes each time someone has called a woman a “Karen” during the past year to describe, according to the internet, “an obnoxious, angry, entitled and often racist middle-aged white woman who uses her privilege to get her way or police other people’s behaviors.” I know a lot of nice women named Karen and I hate to know what 2020 has done to their self-worth. Can we go back to calling entitled white women other trusted pejorative terms?

Anyone who uses the term “sheeple” to describe a cowed, compliant public willing to do anything their government asks of them is tipping their hand, so to speak. It’s not a straight flush or a three of a kind they’re holding either, but a two of clubs, a joker card, a coupon for 20% off a gallon jug of mayonnaise, a Magic the Gathering card and a photograph of what they believe is chemtrails.

This has got to be the most overused, corrosive term ever to come out of President Donald Trump’s tenure in office. It’s a catch-all ejector seat phrase used by those who are lacking in intelligence. Instead of addressing the question or the issue, those who utter “fake news” when faced with a tough question or issue are attempting to alter reality to fit their own fantasy world where the news is fake, but only if you don’t agree with what it’s telling you.

This overused euphemism has become a darling for those who believe the pandemic to be fake or overblown. Like many euphemisms, having “personal responsibility” sounds like an honorable goal. If only more of us actually practiced what we preached. In resisting mask mandates or lockdown ordinances, many claim that people should have the “personal responsibility” to defy social distancing guidelines, not wear a mask and infect whomever they wish. In their view, if you don’t like it, stay home. The problem is that there is very little personal responsibility in openly defying laws you don’t believe in, spreading false information and subscribing to a worldview that is at odds with reality.