Old Man Winter is bringing his A-game (again) over the next couple of days.

The National Weather Service is predicting 18 to 24 inches of snow will fall in the Idaho Panhandle before Saturday morning, and the onslaught of precipitation will begin Thursday morning. 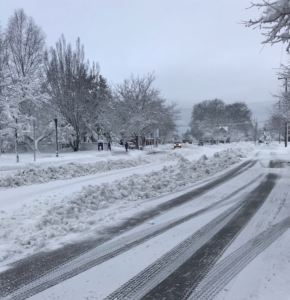 Traffic crawls down Second Avenue and Main Street last week shortly after North Idaho was hit with an influx of snowfall. Photo by Lyndsie Kiebert.

This comes after an impressive accumulation last week, when more than a foot of the white stuff fell in Sandpoint, and even higher amounts fell in other parts of Bonner and Boundary counties. Downed trees and traffic jams became the norm for two days while schools stayed closed and plows worked around the clock.

North Idaho can expect more of the same in the coming days, as NWS predicts chance of precipitation will hover around 90 percent until partly sunny skies arrive on Sunday.

Expect slow going on all roadways, particularly on Friday, when heavier snow is predicted. Law enforcement officials advice using caution while on the road — driving under the speed limit if necessary — and keeping your home well-supplied in case of a power outage or another emergency.