No change to advisory vote after county discussion

Bonner County commissioners voted Tuesday to keep the Scotchman Peaks advisory vote in its previously approved form, despite a request from Samuels resident Dan Rose to revise the question. 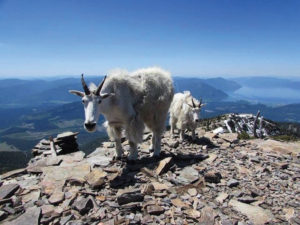 One of the many mountain goats found on Scotchman Peak. Photo by Leslie Kiebert.

In the commissioner’s Feb. 20 business meeting, the advisory vote, which will be on the May 15 primary ballot, was approved in this form: “Do you favor Senator Jim Rischs’ (sic) proposal for congressional designation of a 13,960-acre Scotchman Peaks wilderness area in Bonner County?”

Rose said he believed the question should read “…federal wilderness area.” He also suggested the commissioners revise the beginning of the question to include “or oppose” after “do you favor.” He said these changes would provide clarity to voters.

“I don’t think we should be changing stuff that we’ve already moved forward on. I think there was a lot of input,” said Commissioner Jeff Connolly.

County Clerk Mike Rosedale said he sees the benefit of including “federal” in the ballot question.

“It seems the crux of the whole issue is designating (it) as a federal wilderness area,” he said. “I think that is very key.”

Commissioner Glen Bailey, who led the initiative to create a easy-to-understand advisory vote question, said he sees the question in its previously approved form to be clear already, though he admitted his time in government might make it clearer to him than to the average voter.

“We may understand it, but the voters, when they go into the booth — are they going to understand it?” said Commissioner Dan McDonald.

Connolly said It’s up to people on both sides of this issue to educate voters.

“It’s not up to us to put something out there that’s perfectly worded, but apparently, I thought we were there,” he said, noting that they’ve been working on the question for weeks with little to no input until the end of the process. “This is going to set a terrible precedent. We’re going to have to … re-discuss every issue we choose to go forward with. I can’t support that.”

Friends of Scotchman Peaks Wilderness Executive Director Phil Hough said that by including the word “federal” in the question, it would imply that Congress could enact land designation in non-federal form. He said changing the question would create unnecessary confusion for voters.

Local man Doug Patterson said the word “wilderness” is not an exclusively legal word and that older residents may think of wilderness as simply areas that are “not developed in any way.” He said nowadays, wilderness (especially under legal terms), can mean places previously mined, or places with roads already on them.

Idaho Conservation League Community Engagement Associate Emily Cleveland said that by including “federal” in the question, it implies that land is “changing hands,” when in fact, the Scotchman Peaks area will still be managed by the U.S. Forest Service.

Throughout the meeting, commissioners and attendees referenced the public comment process, which ended prior to Rose’s new suggestions.

“What if that process is gravely flawed?” asked local man Tom Cleveland, who is in favor of Rose’s suggestions. “If the word ‘federal’ is on there, then this sucker is going down.”

Bailey and Connolly rejected Rose’s suggested edits to the question, while McDonald voted in favor. The 2-1 vote secured the previously approved language.