Bonner County voters will have the chance to vote on a special revenue bond on their May 18 ballot — a measure which would allow Bonner County to take on an $8.7 million USDA loan to fund major improvements to local solid waste operations. 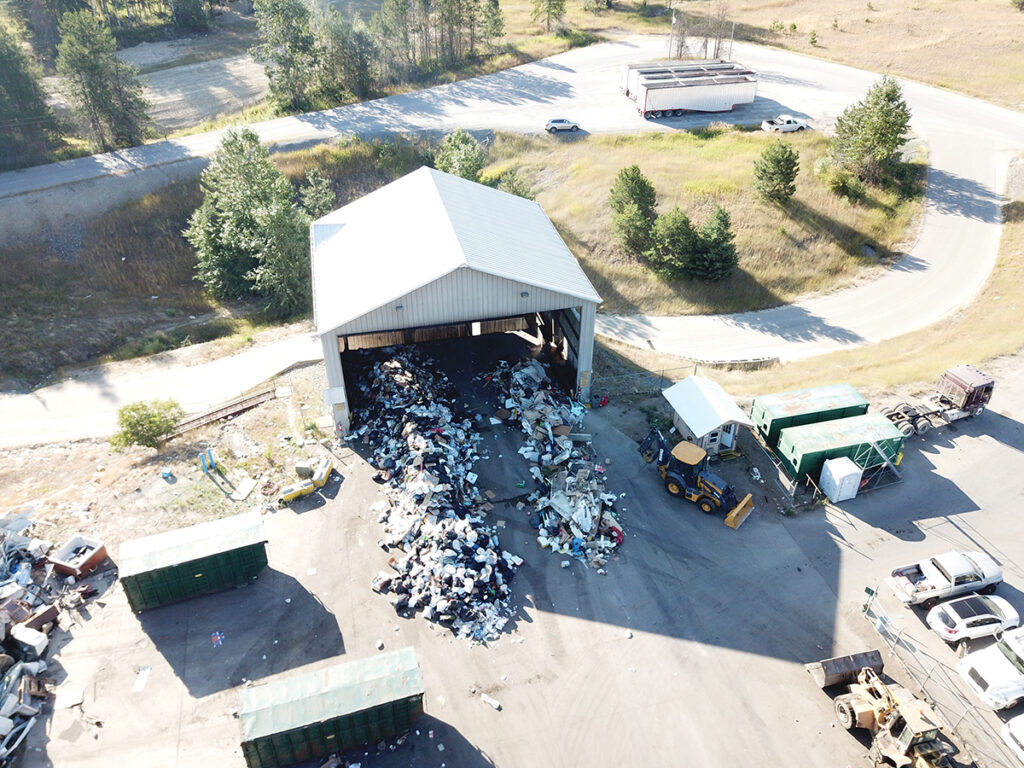 An aerial shot of the Colburn waste transfer site tipping floor, which will be replaced if county voters approve the bond May 18. Photo courtesy of Bonner County Solid Waste.

The bond election is the latest step in a multi-year, multi-tiered effort to bring the county waste management infrastructure into the 21st century. The path to major upgrades became official when outside consultant Great West Engineering released its Bonner County Solid Waste 10-Year Capital Improvements Plan in 2019, a document that pinpointed the most inadequate waste collection sites in the county and provided a timeline for implementing improvements — particularly to the Colburn Waste Transfer Site, where all county garbage is processed.

“Our system is a 25-year-old system — 25 years ago, it was built with a five-year life expectancy,” Solid Waste Director Bob Howard told the Reader, referring specifically to the Colburn site and its undersized tipping floor, where trash is unloaded into truck containers to be hauled away.

While borrowed money is typically followed by increased costs to taxpayers, Bonner County residents are already paying the fees necessary to pay back the $8.7 million loan in full over 10 years. In September 2019, the county commissioners approved a rate hike of 62%, raising the annual solid waste fee per county household, starting with their 2020 tax bill, from $115 to $185 — or, from $9.58 to $15.41 monthly.

A special revenue bond is defined by a guarantee of repayment with revenue from pre-established fees, not additional taxes. By pursuing a loan, Bonner County will be able to begin construction as soon as summer 2022. Thanks to the fee increase, financial models show revenues capable of paying it off by 2030.

“We made a move last year to establish that new rate so that we could actually get the loan. Without that rate increase, we wouldn’t be able to get the loan,” Commission Chair Dan McDonald said during a public hearing on the special revenue bond April 20.

“At the old rate, we were struggling to keep up with operating costs,” he added.

Efficiency is also a major focus of the Colburn site improvements, seeing as trash is often handled two or three times during the transfer process. Additionally, the intermingling of residential and commercial traffic presents a safety issue at the site that the county hopes to address.

Additional costs included in the $8.7 million are improvements to the Idaho Hill and Dickensheet waste collection sites, totaling about $1 million each; $358,000 for upgrades to the Dufort site; and about $289,000 in other project-related expenses.

“This is more about an investment as opposed to an expenditure,” McDonald said at the hearing, “and the bottom line is we really don’t have a choice.”

Howard said that should voters deny the bond, Bonner County would have the option to seek judicial confirmation to borrow the money. The county could also increase rates again “in order to accomplish what we’re trying to accomplish,” Howard said.

Those with questions about the Bonner County Solid Waste Special Revenue Bond Election can reach the Solid Waste office at 208-255-5681 ext. 2 or by emailing [email protected]