This is the second installment of an ongoing series exploring the origins of where we got some of our placenames from. Last week, we covered Pend d’Oreille, Sandpoint, Priest Lake, Priest River and Bonner. This week, another crop of juicy placenames to investigate. 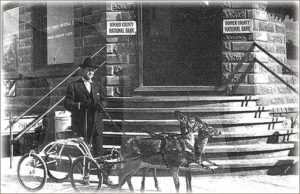 A man with trained deer pulling a cart on the corner of Second Ave. and Cedar St. in Sandpoint. The building in the background is the Farmin Building, which is where the Reader’s offices are located today. Photo courtesy Bonner Co. Historical Society.

In 1900, when pioneer Nathan Powell was brainstorming names for the settlement south of the lake, he considered calling it Wright’s Spur after the spur line on the Northern Pacific. Later, he decided on the name Eagle. When he submitted that name to apply for a U.S. Post Office, they informed him there was already a town called Eagle in Idaho. Powell just substituted the “E” with an “S,” and the name Sagle was born. I wish everything in life was that easy.

The naming of Schweitzer Mountain is somewhat shrouded in mystery. Little is known about the old Swiss hermit who lived at the bottom of the basin named Schweitzer. It is believed he had served in the Swiss military (Schweizer is “Swiss” in German). His cabin was most likely near where Bronx Road crosses the Great Northern tracks. An old story told by Mrs. L.D. Farmin reported by the Sandpoint News Bulletin in the 1960s claims that Farmin was returning home from a shift as a telegrapher and noticed a man in full military attire carrying a rifle, who stepped from the brush on the side of the road, took the bridle of her horse and walked for a quarter mile before entering the brush again. Farmin reported the incident, and the Kootenai County sheriff came from Rathdrum to search the Schweitzer cabin. There they found the uniform he wore and his rifle. They also found, tacked to the walls, the skins of a number of cats that had disappeared from the neighborhood that winter. It was believed that Schweitzer sustained himself on a diet of cat stew. He was later called “hopelessly demented” and committed to a mental institution. Though the man has since been forgotten, his name lives on.

Not much is left of the once busy town of Colburn, located about nine miles north of Sandpoint. It was named for Jean Baptiste d’Armour de Courberon, or “Big John Colburn” as he was called. Courberon was a French Canadian who worked for the Great Northern Railroad. At the turn of the century, Colburn was a bustling little hamlet that boasted a sawmill, shingle mill, post office, hotel, an Odd Fellows lodge and was surrounded by farms along the Selle Valley. Harry E. Brown purchased the lumber mill in Colburn in 1920 and established the Brown Timber Company. At its height, Colburn had a population of around 300 people and the mill employed 60 men. The town dried up after a series of calamities; the Great Northern Railroad depot closed in 1935, the Odd Fellows lodge shuttered in 1952, and fires destroyed many of Colburn’s buildings. The school was burned twice and rebuilt. After the lumber mill finally closed its doors and the Idaho Transportation Department purchased homes and businesses in order to widen Highway 95, little was left of this once bustling town. Local historian Bob Gunter once wrote about an old abandoned cemetery with gravestones marking the passing of several of Colburn’s early residents in the Bonner County Daily Bee, but nothing else remains from this town except for the name. Colburn-Culver Road, incidentally, was a farm-to-market road built by the Public Works Administration during the Great Depression. Culver came from brothers Frank and Horace Culver, prominent lumbermen who founded Sandpoint Cedar Co. in 1904.

The name Selle came from homesteader Charles Selle. Selle was originally a railroad siding and loose settlement north of Sandpoint first called “Matchwood,” but the people of the community honored Charles Selle in 1916 by placing the name “Selle” on the railroad depot. Selle’s original homestead was located on East Shingle Mill Road, which was nearby where the Wildhorse Trail passed through Bonner County. The Wildhorse Trail was used for hundreds of years by natives and later hopeful gold miners heading north to strikes in British Columbia. David Thompson also used this trail.

David Thompson was the first white man to come to the area east of Sandpoint now known as Hope. With the help of Finan McDonald, Thompson established the Kullyspell House on Samowen Peninsula on Lake Pend Oreille and traded with natives and trappers from 1809 to about 1811 when it was abandoned. As with many North Idaho towns, Hope’s history began with the coming of the railroad. The Highland House hotel was built by the Northern Pacific Railroad for the use of travelers coming from the east. The most famous visitor to stay at the hotel was famed Civil War General William Sherman. The town got its name from Dr. Hope, a veterinarian with the railroad who cared for the horses used by the construction crews working on the rails.

References to the “Oden Siding” go back as far as 1893 when a rancher posted a notice that a buckskin mare pony was found on his ranch without a visible brand.  Located near present-day Sunnyside, Oden and Oden Bay were most likely named after C.J. Oden, a rancher who lived in this area. The loose settlement of ranches were known as “stump ranches” due to the old growth timber stumps dotting the landscape. In the late 1920s a group of women formed a social club called the Busy Bees of Oden and later organized to build the Oden Hall, completed in 1931. In a history article written in the Bonner County Daily Bee in 1979, Mrs. D.A. Lange wrote about the Oden community soon celebrating “100 years,” so the community may have been formed as early as the 1880s, though most evidence points to the settlement blossoming more in the late 1890s.

Special thanks to local historians like Nancy Foster Renk and Bob Gunter, whose work I have checked to verify some of my conclusions. Also, very special thanks to the Bonner Co. Historical Society and Museum for keeping history alive. Check out Renk’s book “Driving Past: Tours of Historical Sites in Bonner County, Idaho” for a treat.