Think North Idaho is the only place in the Northwest that has battled the stigma of racism? Think again.

“Well this is embarrassing,” someone half-groans behind me in the theater a few weeks ago as a trailer for the documentary “Welcome to Leith” plays. I’m in Bismarck, North Dakota, and the footage on the screen shows a wiry older man with frizzy white hair toting a rifle and spouting racial slurs as he strolls through a rural town elsewhere in the state. After finally seeing the film, I can certainly feel for that other theatergoer. 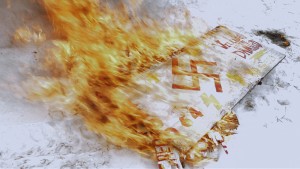 One of Craig Cobb’s signs burns in the snow. Photo by Michael Beach Nichols.

The story of Leith is one that strikes a uncomfortably familiar chord for many in Idaho and Montana. I grew up in Montana in the 1990’s, a time when the Patriot movement was grasping at the backwoods of the state in towns like Jordan, where the Montana Freemen tried to form their own anti-government township in 1996, but were ultimately arrested after a tense standoff with the FBI. Just down the road from my hometown was the north Idaho area, where the white supremacists in the Aryan Nations were headquartered until 2001. Militia movements and white power groups intertwined for much of the ‘90s in this part of the world, a cancerous presence that instilled a sense of unease in those who had the misfortune to live near it. The footage of a man in the street, armed and full of hate, is an eerie reminder of one of the most regrettable phases of history in the Northwest.

That man is Craig Cobb, the central figure of “Welcome To Leith.” In 2012, Cobb moved to the secluded town of Leith, North Dakota, which boasts a mere 24 citizens and sits 15 minutes away from the county seat of Carson (pop. 293). Leith is roughly ninety minutes away from the state capital of Bismarck, the nearest “real” city, and is a dot of civilization with only a handful of properties. When Cobb moved in, his intention was to purchase as many plots of land as he could in order to build a haven for white nationalists. It was a plan that came dangerously close to working as more of Cobb’s ilk moved in, and the filmmakers behind “Welcome to Leith” stuck themselves right in the middle of it. 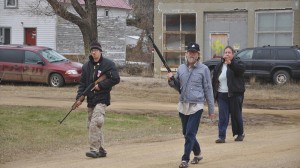 In fact, the “middle of it” is where the films starts and stays. Cobb’s presence in the town grows as he buys up land, but even as the few families that live there become frightened and angry, the films spends as much time with Cobb and his right-hand man Kynan Dutton- a scrawny Gulf War veteran with a poor Hitler mustache- as it does with those who want him out. Directors Michael Nichols and Christopher Walker describe filming with Cobb for the first half of the day, then literally walking across the street to film the neighbors for the second part of the day. The result is a film where you get a real sense of what it was like to live in Leith not just as a citizen next door, but as Cobb himself.

Soft-spoken and articulate with an easy smile, Craig Cobb is not what most imagine a devout racist to be. There’s an undeniable intelligence to the man who, at the surface, seems like your slightly-off uncle. But as the film delves deeper into his life it’s clear that a monster lies underneath, one that gleefully talks about the superiority of the white race, who screams anti-Semitic slurs at the opposition, and who spends the vast majority of his days online, stirring up support for his views in white supremacist forums.

Cobb’s true nature eventually led to safety concerns for local news crews covering developments in Leith, and was the reason a city police officer was present inside the screening room for every showing of the film in Bismarck over the course of three days. It’s one thing to be a hateful person, but as the film shows, it’s another to be one with ties to murky individuals who have no qualms about committing violent crimes. The film drips with that malevolent presence, and when combined with all the foreboding shots of a winter-clad Leith, it plays like a horror film.

Atmosphere aside, “Welcome to Leith” is at its most interesting when normal, law-abiding citizens are pushed to their moral limits by Cobb’s presence: Protesters from all over the state are shown rallying in Leith in one scene, a hopeful sight to be sure, but another scene has Dutton’s wife finding their vehicles vandalized and a citizen parked in their driveway refusing to leave, despite her repeated requests. You’re honestly not sure whose side to take; can you blame anyone for wanting to retaliate against such a hateful group of people? Doubtful. But if hate begets harassment and violence, where does that leave our society? It’s in these moments, and there are plenty, where “Welcome to Leith” truly shines. 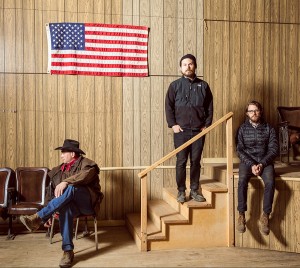 The film does suffer from its shoe-string, kickstarter-funded budget in places, with a few abrupt jumps over months of time, and it’s somewhat difficult to understand the geographic relationship of all the affected towns. These are minor issues though, and on the whole the documentary is not simply coherent, but thought-provoking. It’s a hugely successful endeavor.

“Welcome to Leith” is terrifying and provocative, a fly-on-the-wall documentary drenched in the atmosphere of a horror film. What does it all mean? As I walked out of the showing in Bismarck I could see, just down the street, the Motel 6 where Cobb spent the final few minutes of the film happily reading from a novel on white superiority. It was a reminder that this is not about some crazy thing that happened in a far-away place. It’s about that moment, as Ryan Lenz puts it in the film, “When the outside world that’s kept apart from much of rural America… Sort of came up through the soil.”

Hopefully, “Welcome to Leith” helps us understand how we can stop weeds like Cobb from growing in our communities.