Washington Governor Jay Inslee is looking for answers from PacWest Silicon, according to a letter sent Oct. 30 to company CEO Jayson Tymko. 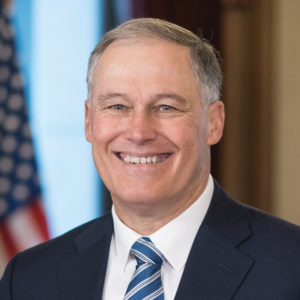 PacWest is responsible for the proposed silicon smelter in Newport, which is drawing pushback from throughout the region. The company has been quiet as of late — something Inslee noted in his letter to Tymko.

“I take seriously the community opposition to your proposed silicon smelter project in Pend Oreille County, especially concerns raised by the Kalispel Tribe,” the letter reads. “As that opposition grows, it appears PacWest is communicating less with the community, tribal and local governments, and state regulators.”

Inslee said that media coverage and talks with residents of northeast Washington have led him to think PacWest may be reconsidering whether to move forward with the project.

“But I, like those who live near the proposed smelter, are left to wonder what the future holds,” he wrote.

Inslee also noted a Strategic Reserve Fund grant the state awarded PacWest “with an understanding” that the company would “create 200 jobs and make $200 million in capitial investments” into Washington, as well as supply materials to the solar panel industry. The Pend Oreille County Economic Development Commission administered the grant, worth $300,000, to the company in July 2017.

Despite receiving the grant and hosting initial presentations to surrounding communities about how PacWest would go about building and operating the smelter, the company has yet to begin the environmental review process with the Washington Department of Ecology.

WDOE spokesperson Brooke Beehler told the Newport Miner in May that PacWest had rejected a $2 million bid in February from a contractor lined up to produce an Environmental Impact Statement for the smelter project. Beehler told the Miner that PacWest changed the scope of the EIS and that they would go out for bid again soon. Inslee said in his letter that the process with DOE is still “on hold,” at PacWest’s request.

“Given these apparent changes, the requirements of the Strategic Reserve Fund contract, and the strong community concerns, I would like PacWest to provide me with an update on the current state of this project and your future plans in Washington State,” Inslee wrote.