The Sandpoint Ranger District regained management responsibilities for the Trestle Creek Complex fire from the Nevada Incident Management Team 3 on July 24 “due to the containment of all fires except the Trestle Creek 6 Fire and the operational complexity decreased moving forward,” according to InciWeb, a national incident reporting agency.

As of July 28, the Trestle Creek 6 fire — burning seven miles north of Hope — remained around 480 acres in size and less than 40% contained. According to Idaho Panhandle National Forests officials, the fire “continues to burn in a backcountry management area that is steep, inaccessible and has a low level of values compared to exposure risks of direct suppression.” The fire is burning in spruce, subalpine fir and brush. 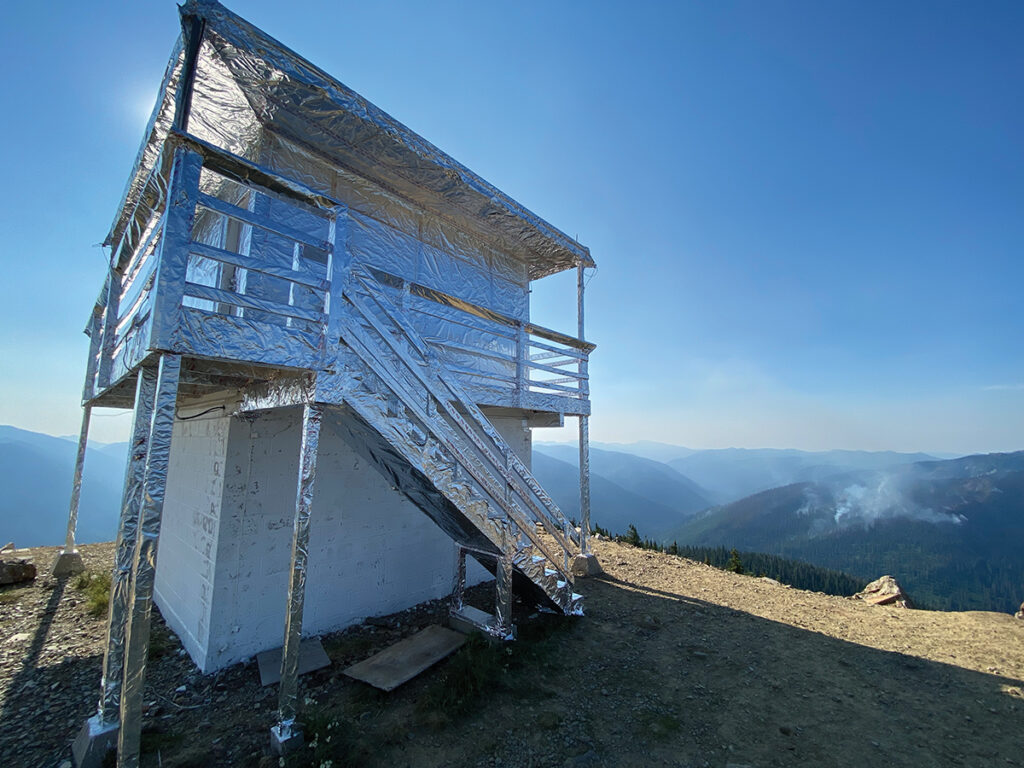 The fire lookout tower at Lunch Peak, with smoke from the Trestle Creek Complex fires visible in the background. The fire tower was wrapped with a special coating to protect it from wildfire. Photo courtesy USDA Forest Service.

“The objective this week is to suppress the Trestle Creek 6 Fire with a confine-and-contain strategy by allowing the fire to come to features like roads, streams and ridges where there are better and safer opportunities for successfully holding a line,” officials announced in a media release. “With warm and dry weather in the forecast, monitoring of the contained fires will continue.”

Trestle and Lightning Creek roads are partially closed to the public to enhance firefighting efforts, and trails 57, 526, 55 and part of trail 120 are also currently closed for public safety. Current InciWeb projections do not anticipate that the Trestle Creek 6 Fire will be contained until mid-September.

Elsewhere in Hope, a fire July 24 prompted response from the Sam Owen Fire District, Clark Fork Fire and a handful of good samaritans. The fast, multi-agency response and about 6,000 gallons of water held the blaze to one acre in the highway ditch opposite of the Denton Slough access area. The cause of the fire has not yet been announced.

Fire officials used social media to clear up some confusion about a large plume of smoke spotted July 25 east of Lake Pend Oreille. The plume is coming from the Burnt Peak Fire in Montana, seven miles east of the Trestle Creek Complex, which measured 3,000 acres as of July 28.

“Thank you to those who alerted 911 with your concerns. It is better for us to check it out and find nothing than the other way around,” Sam Owen Fire District officials shared on Facebook. “With the current and forecasted conditions, we should all be on high alert.”