The View Cafe has temporarily closed after firefighters extinguished a fire in the Cocolalla restaurant’s kitchen this week. 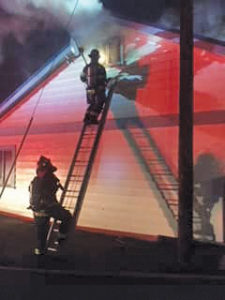 According to Selkirk Fire, Rescue and EMS Chief Ron Stocking, a timely alert by a driver who spotted smoke billowing from the building helped emergency personnel minimize overall damage. The cause of the fire is still under investigation.

“It could have been a lot worse had we not been alerted so quickly,” Stocking said.

According to Stocking, the fire was reported by the driver around 2 a.m. on Tuesday. Within minutes, emergency response arrived on scene and worked on extinguishing the fire, which was located in the kitchen. The fire was smoking heavily, but the flames were relatively contained. Firefighters were careful to ensure the fire had not spread to other areas of the building, like the attic. According to Stocking, the fire was contained quickly thanks to the prompt alert they received. He encourages residents to remain vigilant and report incidents quickly for exactly that reason.

“Luckily, the system worked,” he said.

Restaurant associates acknowledged the fire on Tuesday and announced on Facebook they would be closed for an indeterminate period time.

“Yes we had a fire,” read a post on The View Cafe’s Facebook page. “We will be closed for a while but we will be open again and I will let you all know as we get through the process of it all.”

According to Kerri Newsome, who has owned the business for almost three years, the fire is a terrible setback for a restaurant with a legacy dating back to the late ‘40s or early ‘50s.

“We are happy everyone was safe, and we are hoping to rebuild,” Newsome said. “I will say it is so heartbreaking for all the time my crew and myself have put into the place in the past two and a half years.”