The LillyBrooke Family Justice Center hosted an open house Wednesday evening to showcase progress made since the house’s initial opening in July. 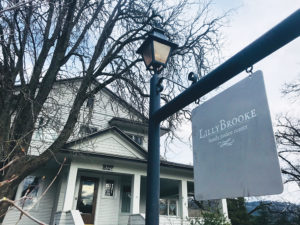 The entrance to LillyBrooke at the McFarland House in Sandpoint. Photo by Lyndsie Kiebert.

LillyBrooke is located in Sandpoint in the historic McFarland House, located on the corner of First Avenue and Highway 95. Director Peggy Frye said the justice center’s overarching goal is to be a “one-stop shop” for victims of assault and abuse, as well as for the people who help with such cases. This could include personnel from the sheriff’s department, Idaho Health and Welfare, forensic examiners and more.

“We want it to be a trauma-informed approach to helping victims,” Frye said. “The house comes into play because it’s a friendly setting.”

Frye said visiting one place (the LillyBrooke house) rather than several places (the emergency room, sheriff’s office, etc.) is easier on victims, especially children. By using the house, Frye said victims need only tell their stories once instead of several times.

LillyBrooke features a forensic examining room, several private interview rooms and a couple offices — but throughout, Frye said, the goal was to make it feel like a comfortable home. LillyBrooke even has a facility dog, Ken, who was trained by Canine Companions for Independence, an organization that provides assistance dogs free of charge to people in need.

Prosecuting attorney Louis Marshall said that while LillyBrooke is county run, almost the entire operation is funded by grants and donations.

Learn more about the center at lillybrookefjc.org.