A salute to our fallen aerial warriors

In early summer in 2012, my wife and I were walking from the train station in Arles, in southern France, to our hotel when we reached a small park with an imposing monument. To my surprise, the monument was there to honor two American pilots who died fighting to help free France from the Nazis in the summer of 1944. 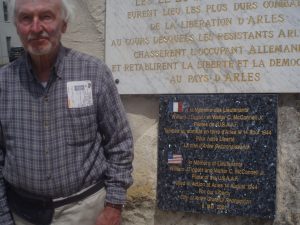 “In memory of Lieutenants William J. Tippett and Walter C. McConnell Jr., pilots of the U.S.AA.F. (U.S. Army Air Forces) killed in action at Arles 14 Aug. 1944 for our liberty. The City of Arles Grateful Recognition, 8 May 2002,” the plaque read.

As a former Air Force fighter pilot, I saluted these young warriors who died so far from home to free a continent from tyranny.

While we honor our military veterans on Veterans Day in our country, it was gratifying to learn that these fallen warriors are also remembered by those for whom they gave their lives to save.

In a nearby location, amidst the vineyards of the countryside, another monument stands dedicated to five other American pilots. Three of the P-38 Lightning pilots were downed in an attack on June 15, 1944, trying to weaken German defenses for the Allied assault of southern France that would follow the Normandy invasion. Later, two other pilots were downed by flack and killed on similar missions.

At a dedication ceremony, some 200 French residents gathered to honor the five pilots and hear the mayor the nearby town of Camaret Sur Aygues say, “ We thought it was necessary to express with this memorial stone our sincere gratitude to those young pilots for their dedication in the darkest hours of our history, for their active participation in the liberation of our country and to the victory of the free world over Nazi Germany.” 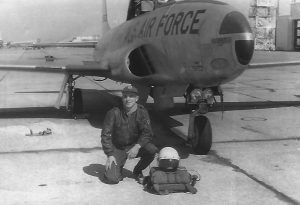 Jim Ramsey kneels before his T-33 jet trainer in this photograph taken in 1957 at Bryan A.F.B, Texas. Courtesy photo.

Just east of here, at the Hope cemetery, a marker identifies Capt. Mark VanStone, an F-102 fighter interceptor pilot in the Air Defense Command who was killed on a training mission based at McChord AFB, Wash. His brother Alan, who is also buried there, served as a major in the U.S. Army in the Vietnam area. Another brother, Dale VanStone, a Hope resident, served in the Air Force in Thailand. (Dale is a former Bonner County commissioner.) Dale’s son Kevin is an Air Force C-130 pilot.

We owe these, and all the other veterans who served in other branches of our military, our deepest respect and admiration on Veterans Day on Nov. 11.

Jim Ramsey, who lives in Sandpoint, served as an F-86L interceptor pilot in the U.S. Air Force.