Vanished: the Disconnection of Reality

Editor’s Note: We had such a positive response to Ms. Blackwood’s first article, “A Cloaked Reality” dealing with teenage depression, we asked her to write another on topics she feels might be appropriate for teenagers dealing with depression and disconnection with reality. To protect her privacy, we’ve given Ms. Blackwood a pseudonym. She is a 15-year-old teenager in Sandpoint.

The bewitching of blackened shadows lay upon me, as the coils lurk among a harbored despair. Shaky hands seize the clutches of doom, as the darkness prevails within me. The tendrils whisk a shattered soul, beckoning a cavern of hollow torment. Feverish gasps lurch within me, as I cry out, Screams of icy bitterness sweep upon me, engulfing a once violent flame. And at once, the emptiness consumes a forsaken vessel. 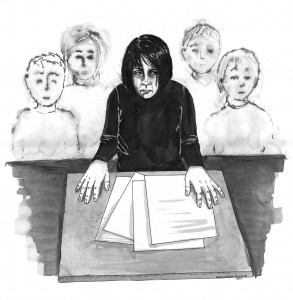 It has been said, in previous forms, that the greatest of enemies, lie within oneself. That the destruction of humanity exists primarily within the demolition within. That, perhaps, physical means of torment provide nothing, in contrast to emotional distress. Inner conflict is, in many cases, a devastation unlike any other. That we, in turn, create our own demons.

Loneliness, is a state of being existent within oneself. Seemingly uncontrollable, it seeks to enrapture it’s victims with the worst of all devastation. The loss of one’s true self. The act of being alone, and the experience of loneliness itself, are two highly different conditions, commonly associated with similar meanings. This, however, is an utterly false testimony.

Mankind, although a highly sociable species, relies on periods of physically being without social contact for some periods of time. Many in fact relish in isolated areas, where in which they themselves feel is a more adapted and comfortable environment. How others suggest that long exposures of being alone frequently may lead to an emotional state of loneliness.

Loneliness, as being an emotional state, is prescribed as a mental condition. Loneliness plagues the minds of individuals universally, however, teenagers widely included. Reclusive behavior, although being quite common in adolescents, often time leads to long periods of isolation, which may trigger unhealthy emotional  tendencies, such as loneliness.

Many individuals wish to seek an escape from such continuous isolation, as the urge to socialize begins to deteriorate the unsuspecting victim. Contrary to popular belief, loneliness is not limited to the physical act of being alone, yet, it is also very common among those who are among social situation. However, the emotion of loneliness may oftentimes continue to be intact within the individual, even within social areas.

Disconnection from reality is a common symptom regarding loneliness, leading many individuals attempting to discover a method of relief through the escape of reality. In teens, as well as a multitude of others, this concept may be achieved in a number of ways. Commonly, social media plays a primary role within the escape of reality.

Adolescents and the sufferers of emotional conflict may seek refuge among a social media outlet, chatting with strangers and friends virtually through technological advances.

Also, other forms of escape commonly include means of entertainment. Some of which involve; movies, TV shows, books, writing, and video games. The items listed above include the delusional belief of existing as another being, in another location.

Perhaps this may often include, a time, realm, and reality, vastly different than that of the environment the individual wishes to escape. However, other methods commonly used to create the illusion of false reality include the uses of substances, alcohol, and abuses of  substances in that form. The concept of becoming detached from reality is certainly not a recent development, however, more and more methods of detachment are being developed each year to come.

Although temporary escape from reality is a normal behavior, excessive usage of delusionary tactics may become abused. For, rather than dealing with the issue directly, many revert to sources that may online increase their feelings of isolation and loneliness. For example, irrational use of technology oftentimes increases symptoms of isolation. Adolescents in particular wish to relieve themselves from the stresses of society through the usage of technology, whether that be through social media or online chatting with unknown strangers.

Also, just as depression, loneliness commonly leads to a lack of motivational support, which means that sufferers of increased isolation oftentimes lack the motivation for participating in activities that will allow them to improve. Many are unaware that online interaction will only increase emotions of isolation and loneliness. A routined schedule oftentimes aides in the improval of loneliness, and a feeling of purpose and support is also key.

Rather than turning to a virtual reality, many should experiment with the offerings of the natural world. Allowing purpose may provide a sense of meaning into the life of an isolated individual. Meeting others, and experiencing enjoyable activities also aides in a fruitful cure. Finding others who will support and guide through situations of difficulty is also a crucial method of relief. Lonely individuals must communicate with others directly.

Humanity within itself is a primarily sociable species, and is required to communicate with others of it’s kind. Without any means of communication, it is certainly not uncommon for one to develop symptoms of loneliness and reclusive behavior. However, emotional instability must not be diverted with frivolous activities, but rather, dealt with directly and formidably in a manner of control.

The blackened waters cascade upon fragile doom, revealing a window of shadowed abyss. I plunged into the earthly dwelling, my limbs a charcoaled sea. Rasped chokes emitted from my scorching breath, as at once, the images prevailed in a cascade vibrant remnants.

“What is it like?” He had said. “The loneliness?” My lips quivered in a shattered smile.

“It’s like drowning,” I had answered, my voice a wisp of hushed silk.  “Screaming. Choking. But no one, not a thing in the world, can hear you.”