You’ve heard of the Pacific Crest Trail and the Appalachian Trail, right? Wouldn’t it be great if we had our own long distance trail here in the Northwest? Wait a minute, we do! It’s called the Pacific Northwest Trail (PNT).

First proposed in 1970, the PNT was envisioned by a mountaineer named Ron Strickland, who thought we should have our own national scenic trail here in the northwest. Strickland’s vision was for the trail to hit the highest points along the northwestern part of the country. It begins at the crown of the continent in Glacier National Park and follows the watershed all the way west to the coast. 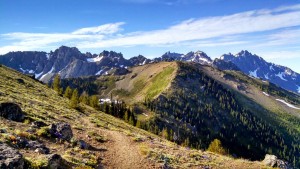 The PNT near Marmot Pass in the Olympic National Forest. Photo courtesy USFS.

“National historic and scenic trails are the top tier,” said Stephanie Campbell, regional coordinator for the PNT concerning the Idaho and Montana legs. “They’re the best of the best for our nation’s cultural historic scenic qualities.”

There are only 11 national scenic trails in the country, including the Pacific Crest and Appalachian Trails. Though the PNT was passed in an omnibus land act in 2009, it has floated largely underneath the surface due to routing issues.

According to Mark McGrath, PNT Program Manager, a  “bird’s eye” route of the trail that was approved by congress will need to be tweaked and rerouted in places to avoid hang-ups.

“Northern Idaho has some of the more challenging planning questions to deal with,” said McGrath. “There are no trails going right over the Selkirks. It’s a four mile bushwhack.”

Currently, the PNT ends at Pyramid and Ball Lake. After bushwhacking over the west side of the ridge and down into Lion Creek, the trail picks up again and leads into Priest Lake State Park.

“The problem is that’s really sensitive grizzly habitat,” said McGrath. “We haven’t publicized the trail in North Idaho because of that habitat … we don’t want people to get hooked on the PNT and then change it.”

McGrath said 40-50 people have through hiked from one end of the trail to the other last year, but over 100,000 have used portions of the trail.

One benefit of a national scenic trail passing through town is a boost to local economies, said Campbell.

“The communities are invigorated with more money and eco tourism,” said Campbell. “If someone wants to do a day hike, they might go to a brewery after, or a bookstore, or stay at a hotel in Bonners Ferry. We’re seeing the benefit of an economic boon it can bring to small communities. Even a few more visitors a year can be big for these small 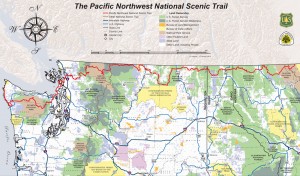 Next week will see a few events in Sandpoint discussing the future of the PNT, including an informational meeting with Idaho Conservation League’s After Hours event on Monday, Oct. 12 at Ivano’s Ristorante. The event is free and doors will open at 5 p.m., with presentations beginning at 5:30 p.m.

The public is also invited to meetings on Oct. 14 and 15 at the Best Western Edgewater in Sandpoint. The meetings begin at 8 a.m. both days, with a public statement period occurring taking place at 4:30 p.m. on Oct. 14.

“It’s an opportunity for people to have a voice in their trail,” said Campbell. “How it’s going to look, what their involvement will be. We’re working together for this land that is all of ours.”

According to McGrath, the meetings kick off a multi-year planning process that will establish an exact route based on the approved congressional route. There will also be a presentation that describes the many virtues

“We’ll have another meeting in five or six months from now, and at that point, we’ll be looking for rerouting possibilities,” said McGrath.

For more information about the PNT, there are a few websites available. Login to fs.usda.gov/pnt or pnt.org for maps, routes, and updates to the next big trail in the northwest.