By Ben Olson and McCalee Cain
Reader Staff and Contributor 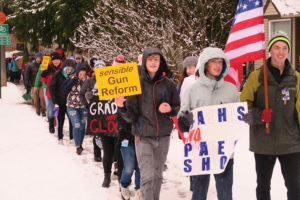 “March for Our Lives” participants in downtown Sandpoint. Photo by Ben Olson.

A heavy spring snowfall didn’t deter the hundreds of people from marching on Saturday morning. At the south end of the Long Bridge, over 100 amassed for the “March for Our Rights” to support the Second Amendment and push back against weapons bans. At the Sandpoint City Beach, over 225 people gathered to participate in the nationwide “March for Our Lives” to protest gun violence and call for stricter regulations on firearms.

“March for Our Lives” began with a public speech at the City Beach, and culminated in the protestors marching the city streets down First Ave., north to Larch St., then back toward the Beach along Fifth Ave. 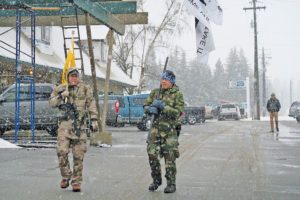 Two “March for Our Rights” participants arrive at the south end of the Long Bridge. Photo by Ben Olson.

Led by students from Sandpoint High School, “March for Our Lives” participants carried signs with all sorts of messages: peace signs, placards that read, “Sensible Gun Control,” “Teachers should be in charge of grades not Glocks,” and American flags.

Benj Rogers, a freshman at Sandpoint High School, said he was marching for “better gun control. We’re losing lives, as you see from the Parkland shooting. We lost 17 lives.”

“I’m here to support the kids in our community,” said Dennis Roubicek, a Sandpoint resident for 40 years. “I think it’s pathetic they have to go into the streets and ask for their safety. It is time we stood up to the NRA and fringe groups that have no sensibility about gun control.” 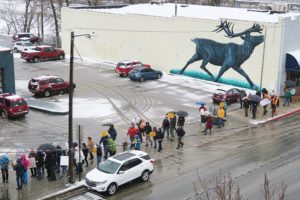 An aerial view of the “March for Our Lives.” Photo by Ben Olson.

Roubicek said the march surpassed his expectations: “I think in our county, and in this kind of weather, this turnout shows there’s a full latent support for realistic gun control.”

College student Hailey Nicholson said she thought it was ironic that it was easier to buy a gun than it is to attend college.

“It’s such a detailed process for me to go to school,” she said. “I have to write an essay on why I want to go to school, on who I am, then I have to go through an interview process for that and they I get accepted or not. (To purchase) a gun it takes 15 minutes of a background check. I don’t think that’s enough… I should be educated on how a gun works.” 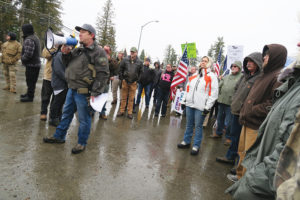 Steve Wasylko, who organized the “March for Our Rights,” speaks to the participants before marching across the Long Bridge. Photo by Ben Olson.

Across the Long Bridge, “March for Our Rights” participants congregated to support their right to own guns. Marchers carried American flags, “Don’t Tread on Me” flags, and signs that read, “Commies Love Gun Control,” “We Love the Second Amendment,” and “Trump is My President.”

The majority of marchers carried firearms. Some wore pistols on their hips, others carried bolt action and assault style rifles.

Steve Wasylko from Sagle, who organized the event, said he wanted to host this march as a counter protest to the many marches against the Second Amendment going on around the country. 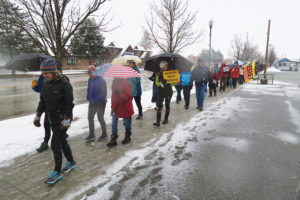 “March for Our Lives,” participants on Fifth Ave. in Sandpoint. Photo by Ben Olson.

“All those marches going on that are supposed to be student-led, but I don’t really believe that,” said Wasylko. “They’re backed by big money. …there are 18-page documents available for download that tell these kids what to say, how to say it.”

Wasylko believed that new laws are not necessary for gun ownership when our nation already struggles to enforce the laws they currently have on the books.

“I’ve got kids, and I don’t think passing another law is going to keep things safe,” he said. “It’s just to give a false sense of security. …We’re fed up. That’s why we’re here right now.” 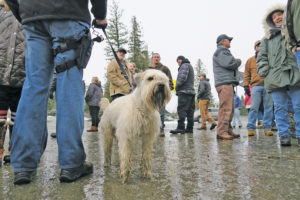 A dog keeps watch over his owner at the “March for Our Rights” on Saturday. Photo by Ben Olson.

Wasylko said he supports federal background checks help prevent criminals and those with mental health issues: “I don’t think any responsible gun owner wants to see a violent felon with a gun, but banning the AR-15, that’s not right. This is America. If bad people have access to weapons like this, how I defend myself?”

“March for Our Rights” participant Ron Korn said he believes the problems lie not with guns, but with people, especially our federal law enforcement agencies.

“Look at the Parkland shooting,” he said. “The FBI did not do their job. They dropped the ball. There were 39 law enforcement contacts with that kid. What happened there? The armed guards (at the school) also didn’t do their job.”

Korn said he supported arming teachers and school resource officers, but only if they were properly trained. 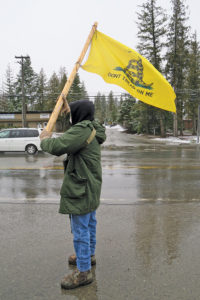 A man carrying a flag that reads, “Don’t Tread on Me,” at the “March for Our Rights” protest on Saturday. Photo by Ben Olson.

“They need to be qualified, like a deputy,” he said. “Gun free zones don’t work because it’s a hunting ground for these idiots.”

Korn also believed the “March for Our Lives” protest was organized by a larger entity: “It’s hard to buy that this march is led by these kids. It’s obviously orchestrated by adults. Look, I deeply believe in the Second Amendment. I’m 53 years old and not influenced by anything but my own beliefs. I don’t want my kids to grow up in a communist, socialist country.”

Both marches were peaceful and non-confrontational.

Hundreds of thousands participated in over 800 sister marches across the country as part of the “March for Our Lives” event. Students from Marjory Stoneman Douglas High School in Parkland, Florida led the march in Washington, D.C. where thousands of participants marches down Pennsylvania Avenue to the White House.

McCalee Cain, a senior at Sandpoint High School, contributed reporting to this story.