To be fair, I had forgotten how awesome submarines are for the simple fact that they’re so stealthy. They sneak up on you and when you least expect it… A torpedo through the poop deck!

Yes, they’re real. No, they’re not for what you’d think. Thank the French for such a funny word.

They’re funny things, always referred to as a boat and not as a ship. In the Navy, even ones that are as big as some warships are still called “boats.” They’re boats that go underwater without killing their crew, and can resurface at a moment’s notice.

How in the world do they do it?

Typically, buoyancy keeps ships afloat: A hull filled with air displaces water in a certain way, allowing the boat to not only stay afloat but stay balanced. Submarines obviously don’t do that. So what do they do? 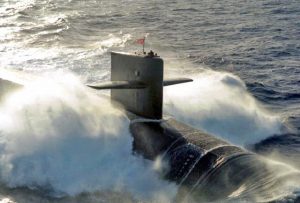 A submarine has multiple compartments within the hull for storing air and water. If a submarine needs to dive, they use mechanical devices to move the pressurized air to different compartments, then let water spill into the compartments in the front, effectively weighing the submarine down with water and pulling it down at an angle, initiating a dive. When they reach the level they want, they stop more water from coming in and the submarine levels out.

Do you want the sub to lean? Pull water into one of the front compartments where you want to turn. Want to rise to the surface? Purge the water! You’ll lose some air, but as long as you don’t lose it all, you should rise back up and be able to refill.

It’s an interesting concept when you think about it. It’s a mastery of buoyancy. While traditional boats rely on the air within the hull to remain stable, a submarine needs to shuffle it around and move it to go above and below the water.

Did you know the first submarine seems to have been invented during the 1500s? A couple of guys made a wooden boat with a shell on it, decided to show off to the Holy Roman Emperor Charles V and went underwater. While many noblemen were no doubt jesting about the two corpses at the bottom of the river, the two men were responding with laughter over how stupid everyone on shore was about to look. They shot back up, and even had a candle lit to show off how awesome they were.

Cool as this early submarine was, it was nothing like the ones we have seen in the last century.

Submarines were first used for warfare during the Civil War, albeit very poorly. The few we had sank and didn’t come back up, and they didn’t rack up much of a body count in the war compared to the ironclads and steam-powered warships. We began to see more use of them in World War I, and definitely more yet in World War II.

Back in WWII, the men aboard the submarines didn’t have fancy computers to automatically fill and drain the craft when they wanted to turn, dive or rise. They had to calculate each maneuver while under enemy fire or dodging depth charge mines, then execute them flawlessly. Talk about nerves of steel!

Submarines used in war these days are pretty incredible. They’re called nuclear submarines because of the nuclear reactors that power them. These reactors solve a problem that traditional diesel combustion submarines suffered from: requiring air to keep moving. Well, I mean sure, the submarine still needs air for the crew, but with nuclear submarines the power source isn’t competing with the crew for oxygen.

As well, most nuclear submarines are capable of carrying nuclear warheads stealthily from sea to shining sea.

Did you know you can get an underwater craft of your own? Technically, it’s called a submersible, as it has some drawbacks compared to a traditional military submarine, but it’s still capable of going underwater deeper than a human can on their own.

Most submersibles have a maximum depth of about 100 to 2,500 feet, depending on the model. Any deeper than that, and the weight of the water will begin to crush the craft—and you inside it. Don’t count on exploring the bottom of the Mariana Trench (36,000 feet underwater).

High-end scientific submersibles can get almost a mile underwater, but you’re going to be paying some pretty hefty premiums for a watercraft that already has an astronomical price tag.

If you want to explore parts of Lake Pend Oreille in your own submersible craft, the starting price seems to hover around $100,000 big ones. If you really want to get to the bottom of the lake, you’re going to be shoveling out a little closer to $3.5 million.

Pocket change, right? Maybe you’ll find that fishing hook you lost as a kid, somewhere at the bottom of the lake.