For Joel Shoemaker, the combination of his two passions — woodworking and playing music — seemed a natural fit: building guitars.

Shoemaker delved into luthiery as a hobbyist nearly two decades ago, then began his own woodworking business around 2009. Building guitars became a professional endeavor, each of his creations now sporting a model name, serial number and his full name on a decal inside the sound box: “Joel Keefe Shoemaker.” 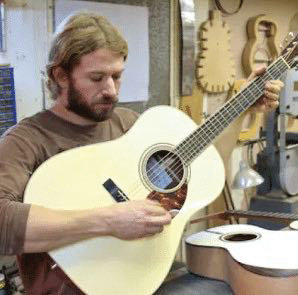 Joel Shoemaker tests one of his handcrafted guitars. Courtesy photo.

Shoemaker said he grew up off the grid with music as an integral part of everyday life.

“There was no television,” he said. “Our entertainment was musical — whether that was the record player or the radio. Music’s always been a constant in my life, especially acoustic music.”

When Shoemaker isn’t building guitars, he’s working on other wood creations, like the booths and bars at the new MickDuff’s location on Second Avenue in Sandpoint.

While luthiery is still woodworking, he said building instruments stands in stark contrast to creating cabinetry. He said he often sets aside the winter months to build guitars, seeing as the trade requires different tools and, oftentimes, a different mindset.

“I’ll go for days without turning power tools on,” Shoemaker said of guitar building. “So for me to go back and forth between building somebody a kitchen and then building a guitar — it’s almost like I’m working two different jobs.”

Shoemaker does custom orders, working directly with clients to build a guitar to suit their needs. The process starts with a conversation, he said, and ends somewhere between 80 and 120 hours later with a shining finished product. It’s detail-oriented work, in which creating a single piece of inlay can take an entire day, and lacquer takes weeks to cure. 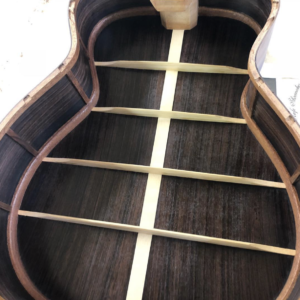 The inside of one of Shoemaker’s guitars, just before getting ready to seal it up. Courtesy photo.

“I care a lot about woodworking,” he said. “Turning trees into musical instruments just feels like one of the nicest things you can do with wood.”

Finding the special touch that each piece of wood requires in order to give a guitar it’s balance between resonance and strength is something that keeps Shoemaker returning to his trade. He said many people like to talk about absolutes when it comes to the correct way to build a guitar, when, in reality, new approaches prove successful all the time.

“People like to use the word ‘master craftsman,’ and I’ve known quite a few over the years, and some of them have been doing it for 40 years and not very many of them will claim to have mastered it,” he said. “It seems like … the more experience you have, the less certain you are of why some things happen. The more guitars I’ve built, the more and more it seems like it’s magic. What makes an instrument sound good? It’s such an intangible thing. I don’t think the fascination with that will ever go away.”