Have you been out enjoying this new snow we’ve been getting? We have! And we at the Idaho Panhandle Avalanche Center thought it’d be the perfect time to talk about early winter season conditions and some avalanche safety tips! 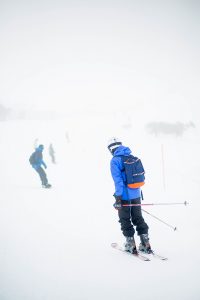 Even though the snow pack is still relatively shallow, there are still potential avalanche hazards in the backcountry. If you’re skiing, snowboarding or snowmobiling, make it a habit from the start of the season to carry the appropriate avalanche rescue gear. At a minimum every backcountry user should have with them:

•The know-how to use them

Know Your Angles in the Backcountry

Knowing the steepness of a slope is one of the best tools you have for avoidance. A 30 degree pitch is generally the slope angle where avalanches start occurring. So if you travel in snow on slopes less than 30 degrees steep, you’re usually safe from avalanches. With that said, you always need to be aware of adjacent steep slopes that can slide into flat areas. Once you enter slopes above 30 degrees, you should consider yourself in avalanche terrain.

There are many opportunities for Avalanche Education here locally: everything from a two-hour Avalanche Awareness course to a full blown four-to-five day Level Two Avi course. For more information go to: www.idahopanhandleavalanche.org.

If you’re looking for a multi-day course: SOLE and Selkirk Powder are putting on AAA and AIARE Level One and Level Two Avi courses.

If you’re looking for shorter overviews: IPAC is conducting Avalanche Awareness classes every other Tuesday from 6-8 p.m. Where? At the Sandpoint Ranger District. The next IPAC class is Dec. 20, and the topic is “Reading the Avalanche Advisory.” We’re also hoping to have our new IPAC website up by then, so we can show everyone the new look and cool features of the website.

Could I Survive the Night with What I’ve Got?

Avalanches are certainly one of the things Mother Nature can throw at you in winter, but don’t forget all of the other basic survival stuff you would normally carry in your backpack. A couple of things I always carry in the winter:

•communication to the outside world (if possible)

There are many things you could add to this list, depending on what you’re doing, but be sure that you’re preparing for winter conditions when you go out. Before you go into the backcountry, ask yourself “Could I survive the night with what I’ve got?” Things would have to go really wrong for you to get stuck overnight, but you should always be prepared for it.

Some Slopes Are Better

Most of us that play in the forest in the summer also play in the forest in the winter, right? Remember all of those stumps, shrubs, and creeks that you scrambled around this summer? They’re still there. Early season can be challenging, with all the stuff lurking under the surface. We’re lucky that we have a long season here. Consider dialing it back a notch early season. You don’t want to end it before it begins!

Know Before You Go

The Idaho Panhandle Avalanche Center puts out an Avalanche Advisory each Friday morning by 7 a.m. during the height of the winter season. Read the forecast, make informed decisions, and know before you go.

I’ve had the chance to dig some in the snow recently, to see how we’re looking heading into the season. So far, the biggest problem in the snowpack is about 12 inches down: the interface between some older snow and some new snow has sandwiched a small layer of weak snow, commonly called “facets.”

Right now, the buried facets aren’t too much of a concern, but if we get back into a storm cycle and put more weight on that layer—plus throw in a little wind loading—and those facets could turn into a problem. Keep an eye on our Avalanche Advisories every Friday morning, and we’ll keep you informed about what happens with that layer and the rest of the snowpack.

We’re glad winter is finally here, and look forward hearing about what you see out there! Submit an observation on our website if you see anything interesting with the snow in the backcountry. With such a big forecast area, we need as many eyes and ears on the snow as we can get, and we really like hearing about what you backcountry enthusiast are seeing out there. You can also find the Idaho Panhandle Avalanche Center on Facebook, Instagram, and mtn hub.

Stay warm and we’ll see you out there!