A bald eagle lights on its nest in a cottonwood tree above Trestle Creek and Lake Pend Oreille. A beaver methodically places another stick on its lodge down below. Young bull trout and kokanee are about to be swept down the creek and into the lake by spring run off. Under the soil and rocks, there are artifacts from the Qlispé, who once stood at the outlet of the creek before the land was taken from them. 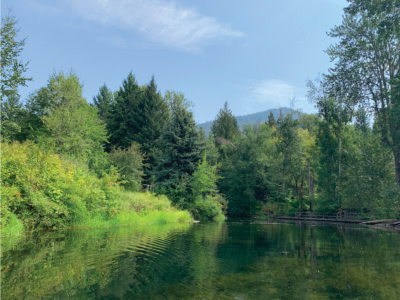 Residents of North Idaho are familiar with the Trestle Creek Recreation area and the opportunities it provides to appreciate the beauty there. Some may not be as familiar with the serene inlet that sits at the mouth of Trestle Creek, tucked away just off of Lake Pend Oreille. This quiet and lush area may soon change in a drastic way before many get a chance to realize what was lost.

The Idaho Club has proposed a marina and residential development in this location, which calls for dredging thousands of cubic yards, including the small inlet and island which are home to a variety of wildlife. Wetlands would be filled to create a flat site for parking and residential construction. Trestle Creek would be confined to a straight, simplified channel, with no access to its historic flood plain.

Bonner County has already signed off on the project, and the Army Corps of Engineers may soon approve the requisite dredge and fill permit.

Much has been said about increased development in North Idaho. Natural assets are being forever lost to make way for luxury homes and other developments. No trespassing signs are posted where longtime residents were accustomed to accessing the land and water. These changes impact not only the people of this area, but wildlife and their habitats as well.

Perhaps what’s most troubling about the plans for Trestle Creek and other similar developments is that those entrusted with looking after the public interest — local, state and federal agencies — are content with permitting these projects with little or no environmental review. This lack of adequate environmental review led the Idaho Conservation League, Lake Pend Oreille Waterkeeper and Center for Biological Diversity to threaten to sue the Army Corps of Engineers for authorizing the proposed marina and residential development without considering recent data about the use of Trestle Creek by bull trout for spawning.

The agency relied on a report prepared by the developer’s own consultant to conclude that there were no wetlands present on the site. However, anyone that has been to the mouth of Trestle Creek knows that the quality fish and wildlife habitat exists there because of the wetlands.

The scope of the environmental review was also too narrowly limited. The Army Corps dismissed public comments asking the agency to describe the upland impacts of the Trestle Creek Project. The Corps suggested that they have no jurisdiction because the residential development could proceed with or without the marina. However, the residential component cannot occur without filling the wetlands that the developer’s consultant says don’t exist. Moreover, the plans call for using the material that will be dredged from the marina to fill the wetlands.

Finally, it is unclear if the site has been adequately surveyed for cultural resources and artifacts. A site that was so frequented historically by the area’s indigenous people surely has artifacts or other signs of historic use. With this development, the site will forever lose any resemblance of what it once was to the Kalispel People.

We hope that the Idaho Club will consider conserving this property for its natural and cultural resources instead of developing it into a marina and residential complex. If they do not, ICL stands ready to hold the Army Corps accountable for not following the letter of the law if the agency approves the project. A much more thorough environmental review must be taken if the proposed development is ever going to move forward.