Trapping is a legal, useful tool to manage wolf populations

A few years ago I was hunting on the west side of the Selkirks. It was a crisp September morning, the frost was still clinging onto the beargrass, where the sun hadn’t yet burned away the shade. Rowdy, my German shorthaired pointer, ran down the gated road in search of grouse. Shortly after beginning to hike behind Rowdy, I noticed lots of wolf tracks and scat on and off the road, the freshness of which varied from a year ago to just a few days old. 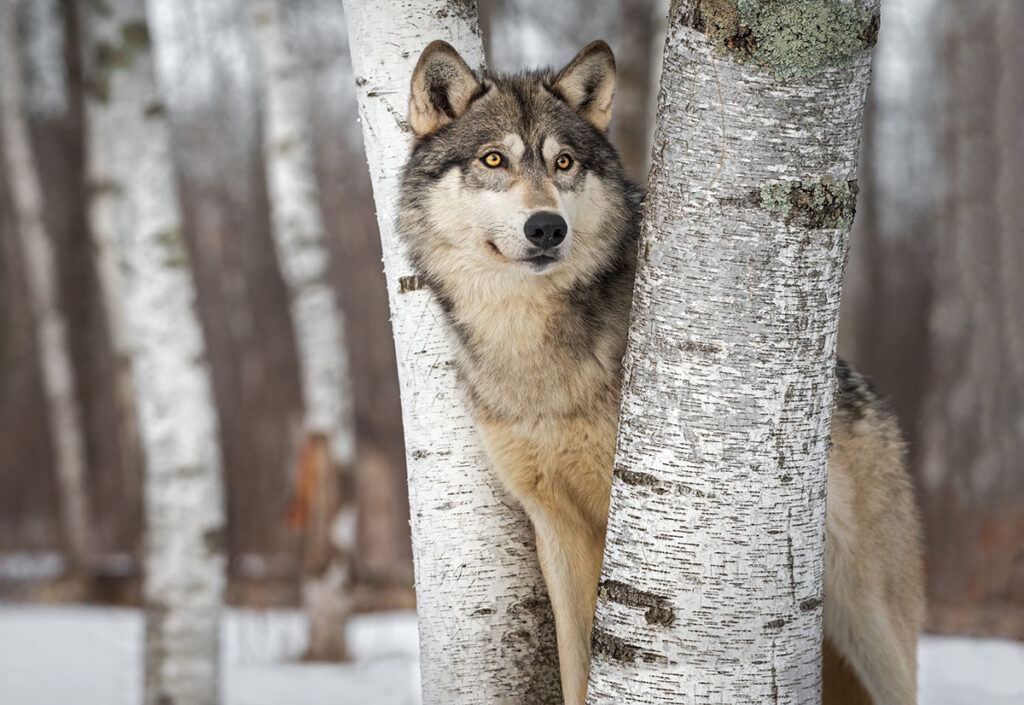 A gray wolf (Canis lupus) looks from between two trees in the winter. Courtesy photo.

About a mile in, I encountered a fresh-killed cow elk. There was fresh wolf sign everywhere. The ill-fated elk has been disemboweled from her hind end. Her demise was almost certainly not a quick one.

I decided to take a spur trail back to the truck, since I had my dog with me and wolves will take any chance they can get to kill domestic dogs. As we circled around on the trail, I discovered a second elk — another cow — who met an identical fate as the first. Wolves had disemboweled her from the hind end and left her to rot.

Unfortunately, this type of waste has been a common occurrence in the Inland Northwest in places like Idaho, Montana, Wyoming, Washington and Oregon. This is not my only experience with seeing wolves decimate ungulate populations, often without consuming most of the animals they kill. To be clear, I am not a wolf-hater. I’m not a “the-only-good-one-is-a-dead-one” type of person. I am a promoter of management. There needs to be a balance.

Speaking of balance, and in response to Jane Fritz’s “Wolves in Trouble” Perspectives article [Sandpoint Reader, March 17, 2022], I’d like to bring to light a few points that were not mentioned.

Yes, Idaho has been directed to eliminate 1,350 of the estimated 1,500 wolves in the state. However, when wolves were first reintroduced to Idaho more than 25 years ago, the management plan set by the Idaho Department of Fish and Game and the U.S. Fish and Wildlife Service stated that the entire state of Idaho’s wildlife and ecosystem could support roughly 90 wolves, or 10 breeding pairs.

Let that sink in for a moment. That means the state of Idaho has 16 times more wolves than it can sustain. Reducing the number to 150 wolves in the state would be the best thing that ungulate populations in Idaho have seen in the last quarter-century.

Trapping of wolves has proved an effective way to curb the proliferation of gray wolves in Idaho and Montana. With increased trapping, wolf numbers have started to reach a plateau. Unfortunately, this is a plateau that cannot be sustained for much longer — a plateau that is 16 times higher than the state of Idaho can support.

Pro-wildlife organizations like the Foundation for Wildlife Management (F4WM), Idaho Trappers Association, Idaho Houndsmen Association and Intermountain Fur Harvesters have helped to implement recent changes in laws regarding wolf trapping. Yes, as Jane Fritz’s article states, wolf trapping is now allowed year round in Idaho. What was not mentioned is that in most areas of North Idaho, trapping on public land is only permitted in the fall and winter months, so as to minimize conflict with other outdoor recreationalists. Trapping on private land with landowner permission is now permitted year round in the Gem State.

Trappers typically employ foothold traps with wide, laminated jaws to target wolves. These laminated jaws are wide so as to increase the surface area coming into contact with the target’s leg and therefore causing minimal damage to the foot, besides maybe a slight bruise. Notice I said the target’s leg. Wolves. And other predators such as coyotes and bobcats, if we are talking trapping in general. This means that domestic dogs can sometimes get caught in these foothold traps.

Some trappers place signs up in areas stating that there is trapping in the area. Other trappers do not. While signs certainly may help other outdoor recreationalists to consider running their dogs in a different area, signs can also draw unwanted attention. Certain extremists and anti-trappers look for these areas and will steal traps, intentionally spread human scent around sets and otherwise illegally disturb sets. From the Idaho Fish and Game trapping regulations: “It is unlawful: To destroy, disturb or remove any traps belonging to others.”

Trappers work hard and put in a lot of time, money and labor into helping manage Idaho’s out-of-control population of Canis lupus. Signs in the area stating trapping is occurring can undo a lot of this hard work.

I am not saying that signs are a bad thing. I place signs in certain areas, but mostly I do not. My own dog will occasionally get caught in traps I have placed. I take him with me to check my sets. What we need to remember is that Idaho has a leash law for dogs. If you are truly concerned about your dog stepping on a trap, then obey the law and keep your dog on a leash. If you wish to run your dog off-leash, as many of us do — myself included when hiking in summer or hunting in fall — then know that there is a chance your dog may be caught in a trap if it’s during the fall or winter. Idaho Fish and Game has instructions on how to release your dog from a trap if you are unsure. Or you can reach out to the Idaho Trappers Association for instructions.