For more than a decade, Minnesota-based band Trampled By Turtles has been redefining the sound of bluegrass. Members Dave Simonett, Tim Saxhaug, Dave Carroll, Erik Berry and Ryan Young demonstrate exceptional musicianship, blazing their way through often-blisteringly fast acoustic songs with precision. Young, Trampled’s fiddle player, took some time out of his day to talk with us about the band’s dedicated work ethic, diverse musical influences and, of course, their upcoming Festival At Sandpoint show with The Devil Makes Three, which takes place  7:30 p.m. Friday, Aug. 14. 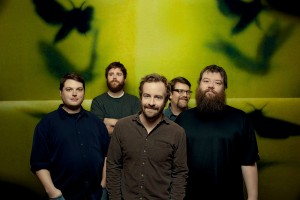 First of all, thanks for taking the time to talk with us today. Between Bonnaroo Music Festival and a bunch of other shows, it sounds like you’ve been busy lately.

Yeah, I’ve definitely been busy. We’re actually taking a little break—I’ve just been at home all day today mixing a record, so even when Trampled isn’t on tour I’m super busy with music.

I can imagine. Is this a new Trampled record you guys are working on?

No, I have my own recording studio, and I have a couple bands in there right now that are either recording or mixing. I was mixing a record today for a band called Kind Country.

And now you’re preparing for a series of shows with The Devil Makes Three, including the one here at the Festival. Can you tell me a little bit about how you work together as bands to put together shows, given your differences in style?

I think we have a lot of fan crossover. Their fans and our fans are often the same people. The music is kind of in the same ballpark: folky accoustic music, which if you’re in that sort of thing you might be into both bands.

Is this your first time playing in North Idaho? I’ve seen you guys play a number of times in Missoula, but Sandpoint is admittedly a little out of the way for most shows.

We’ve played in Idaho and northern Idaho before—a lot of smaller shows back in the day when we were traveling around as a band playing at roadhouses or wherever we could find a gig. So yeah, we’ve been there before, and it’s a beautiful part of the country. Idaho, Montana, Colorado—that whole area is one of the places I love to travel to. Being from Minnesota where everything is flat—and I love Minnesota—but it’s really nice to see some elevation changes.

One thing I’ve noticed about Trampled By Turtles is how rigorous your touring schedule seems to be. Is that rough on the band at all, or is it something you all enjoy doing?

It’s just kind of a way of life for us. It’s what we’ve been doing for 11 years. We’ve actually given ourselves a nice little break coming up at the end of this year to the beginning of next year. We’re going  to just ease off playing the shows a bit and reacquaint ourselves with our friends and loved ones. That should be nice. We haven’t really done that in almost ever.

Considering how fast many of your songs are, it’s pretty impressive how tightly the band hangs together. What was it like to build that kind of rapport among all the members?

It’s kind of a happy accident and not necessarily something we planned out that we’re able to play so well together. It’s something we’ve realized after playing so long together that we know each other really well and we can play off each other really well. Basically that just comes with experience. If a band is going to be together for 11 years, it’s kind of bound to happen that you’re going to get pretty tight.

But I consider myself really lucky that I found these guys. They’re probably the best listeners out of any band I’ve been a part of. Everyone listens to each other really well and reacts to one another in the music. It’s almost like we’re thinking with one mind, and it’s a very cool thing to be a part of.

Could you tell me a little bit about how everyone got together to start playing music?

That was kind of an accident as well. This started out as a side project by our mandolin and guitar player. They were a little folk duo playing at coffee shops and whatever else. Our banjo player ended up coming to know them a little bit and asked if he could join in, so they became a trio. … Then that trio ended up playing a bunch of shows with another band … and they ended up stealing their bass player—he played in both bands until the other broke up. And I was the last to join as the fiddle player. At the time I met them, Trampled By Turtles had become their main band, and they opened up for a band I was in. … Long story short, I eventually joined the band, and it became the five of us. It was kind of randomish. We didn’t grow up together, we just met each other by chance.

Bluegrass and traditional folk are obviously big part of your style, but are there any other bands, musicians or overall genres that really inspire your music?

Actually, just about everything else inspires us a lot more than bluegrass music or folk music. That’s kind of what we sound like because the instruments we play are acoustic instruments, so we sound like a bluegrassy or folky group. And while we like that stuff, some of us hardly ever listen to bluegrass. Everyone has their own influences, and it’s widely ranging, from punk rock to jazz to classic rock to Motown music. Everyone has their favorites, and there’s a lot of overlap, too. That’s kind of what makes us different from other acoustic bands. We don’t try to to copy that bluegrass sound.

I’m sure you get a lot of questions about your name. Could you tell our readers how you came up with it?

It was kind of a brainstorm. It was before I was in the band … so they each came with a page of brainstormed band names. And Trampled By Turtles was the one nobody hated too much.

You’ve built up a lot of great songs since forming in the early 2000s, both originals and covers. Are you working on anything new these days? Any chance we might get a preview of a new album?

We haven’t been working on any new original tunes, but we do have a lot of new covers that we learn all the time. We’re always putting new covers into our sets, so sometimes we’ll play a Bob Dylan tune or a Neil Young tune or a Pixies tune. The most recent thing is we learned a couple Grateful Dead tunes and we play those sometimes. So you might hear a new cover from us, but we make every set different, so I can’t really say for sure what songs we’re going to play.

Well, hopefully you get a little chance to relax and check out the lake while you’re here. Looking forward to seeing you guys at the Festival!