Railroad and environmental officials are working to contain a fuel spill in the Kootenai River after a train derailed into the waterway Jan. 1. 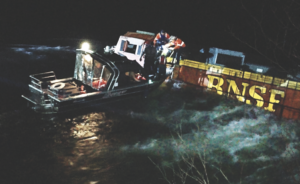 Burlington Northern-Santa Fe officials said a rockslide caused the derailment about 10 miles east of Bonners Ferry, forcing three locomotive engines and six rail cars to jump the track. The lead engine held two crew members at the time of the incident, and both were rescued without injury by first responders.

Crews cleared, inspected and reopened the track by Jan. 4, though, BNSF officials reported Jan. 8 that two derailed engines remain at the scene — one on the embankment, which will likely be removed Monday, Jan. 13, and the other still in the water.

“We’re still working on a plan to safely remove the locomotive from the river,” BNSF spokesperson Courtney Wallace told the Reader. “This is being done in coordination with the appropriate agencies and our focus is to ensure the safety of the surrounding environment. A timeline has not been finalized at this time.”

Wallace said BNSF has more than 6,000 feet of containment boom placed at multiple locations along the Kootenai River, and, with the help of the Idaho Department of Water Quality and Kootenai Tribe of Idaho, identified four environmentally sensitive areas on the river and placed additional boom in those areas. BNSF has also been monitoring water quality as part of the “ongoing recovery and remediation” process, Wallace said.

Dan Redline, regional director of Idaho DEQ, said the spilled fuel has not affected Bonners Ferry’s public water intake area on the river. However, he added, residents with private water systems coming from the Kootenai River should take necessary precautions until water samples are tested in the coming days.

Redline told the Reader that he’s seen a “really good response” from BNSF regarding the derailment. Looking forward, he said DEQ will work with BNSF to continue monitoring water quality and take whatever actions are necessary.

“We’ll have to wait and see as they do more investigation,” he said.