Colby Wilson is a 20-year-old mother to 7-month-old Luca, and as of last Thursday, she is also a high school graduate. 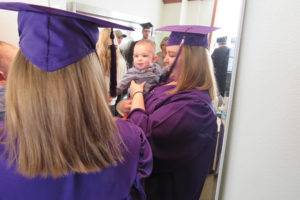 Wilson’s path has been untraditional, full of the ups and downs characteristic of an “alternative school kid.”

She said there were times when it almost became too much to handle, but the teachers at Lake Pend Oreille High School didn’t give up on her.

“I decided to go back when (Luca) was a couple months old — talking about it makes me cry,” Wilson said, standing in her purple graduation gown just before the ceremony. “I wanted to do it for him, and for myself.”

Later in the ceremony, Sarah Wood, who oversees the student support room at the school, praised Wilson’s resilience and reminisced getting to hold Luca during class.

Fifteen students — or, as Principal Geoff Penrose would say, 15 stories — walked at LPOHS graduation on June 7. Because strong student-teacher bonds play such a huge part in the school’s mission, those 15 stories were on display as each student received a personalized tribute from an LPOHS staff member. Wood’s tribute to Wilson was one of many that prompted laughs and tears from the packed crowd.

Graduating seniors Jessica Inman and Joel Mitchell also spoke, both candid about the trials they faced in high school. Mitchell highlighted all the times science teacher Brenda Woodward had to call his mom — often about good things, sometimes about bad.

Inman, who plans to become an elementary school teacher, thanked her teachers for that inspiration.

“I may not be able to change the world, but I know I can change somebody’s world like you all changed mine,” Inman said.

LPOHS office administrator Belinda Wilson is one of the staff members who have taken the lead on graduation for the past few years. On graduation day she is the mother hen, wrangling seniors, handing out tassels and calming nerves.

She said she spearheaded the effort to have LPOHS graduation ceremonies at the renovated Sandpoint Events Center, and that the venue still comes as a shock to graduating students. That might have something to do with the gold molding and velvet stage curtains of the third floor auditorium.

“To watch the kids walk in — you think about all the years we spent with them, and then to see the look on their face, thinking, ‘Wait, we’re doing (the ceremony) here?’” Wilson said. “They’ve gone through hills and valleys, and this is the culmination of all that time — time before us, and time with us.”

She said the packed house last Thursday was made up of not only families and friends of the graduates, but also community members who simply attend because they love the school and its students. Those relationships are helping break down the stereotypes that plague alternative high schools and the supposedly “troubled” kids who attend it, she said.

“People need to meet these kids, because they’re not the kids that people think they are,” Wilson said.