To build a train bridge

Construction on the Sandpoint Junction Connector Project is underway – but how, exactly, do you build a bridge?

After years of project proposals, permit applications, public hearings and no small amount of controversy, North Idahoans are noticing that work has progressed apace on the Sandpoint Junction Connector Project — the second BNSF rail bridge crossing Lake Pend Oreille, within sight of the Long Bridge and parallel to the existing rail bridge. 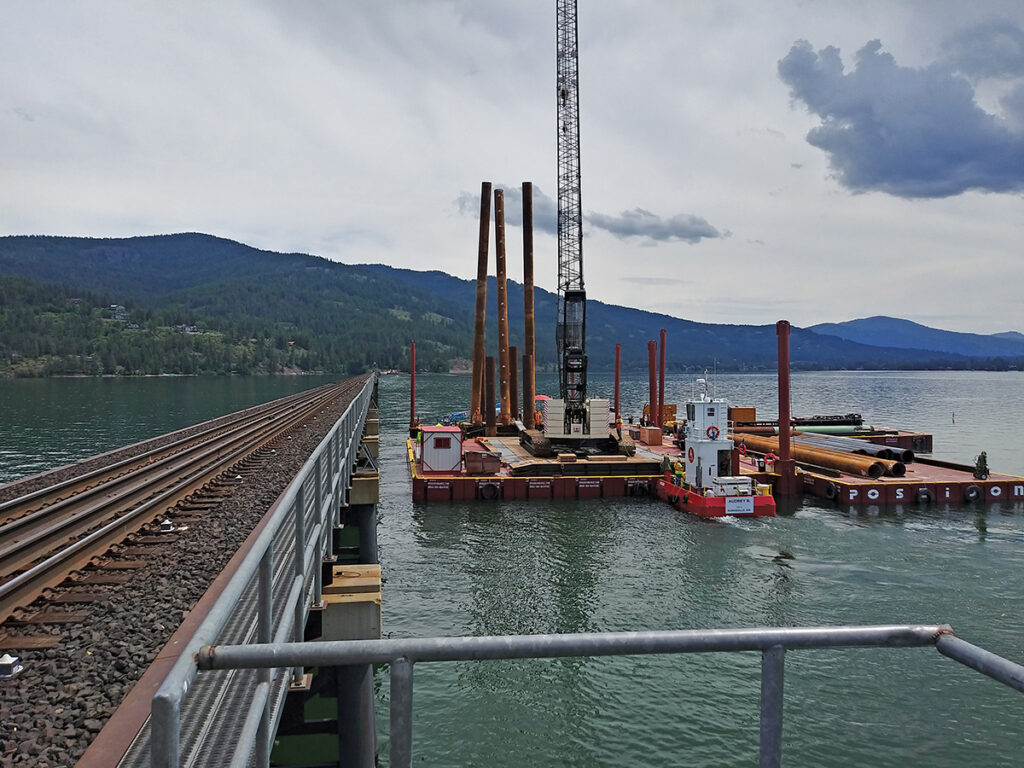 A view of the barges and tug at the bridge building site on Lake Pend Oreille. Photo courtesy BNSF.

The average citizen might be able to name a few components to such an undertaking — pilings, concrete, maybe even some track — but what, exactly, goes into a nearly mile-long bridge over water?

BNSF General Director of Structures Ron Berry shared some of the finer points with the Sandpoint Reader.

The plan of attack

Berry said crews are using existing access roads and staging areas to get materials, equipment and manpower to the shoreline.

“That gets them basically out to the lake, then there’s another decision point: How do we get the equipment out on the lake to build a new bridge?” Berry said. “In this case, we used a hybrid approach.”

Though permitting agencies allowed BNSF to build a temporary work bridge spanning the lake, the company is using temporary access trestles extending off the shore a short distance, then using barges to move equipment and materials back and forth along the work area.

The benefits of the hybrid approach are two-fold, Berry said: fewer temporary pilings are being driven into the lakebed, and construction crews are able to work year round — even as the lake level fluctuates.

Additionally, Berry said that with a “long, linear” project like this, “it’s most efficient if you can attack it from both ends.”

“That’s how we’re attacking this construction project — both from the north and the south concurrently,” he said.

Once staging is complete and equipment is in place, the first order of business is to build the foundation, which is oftentimes the most challenging part of a bridge project, Berry said.

“One of the reasons it’s so challenging is because you’re dealing with stuff below the ground that you can’t see,” he said. “You rely on sampling and testing to determine the engineering properties of that soil that you’re going to be putting your foundations into.”

A foundation is made up of two basic components: pilings or piles, and pier caps.

For the Sandpoint project, Berry said BNSF will use steel pipe pilings and precast, prefabricated pier caps. The pilings can be driven in one of two ways: with traditional pile-driving methods, and with a method called “vibratory driving.”

Berry said the latter is BNSF’s preferred method, being the quicker and quieter of the two. With vibratory driving, the company won’t need to deploy bubble curtains around the site — devices meant to mitigate piling-driving noise. However, pilings installed with vibration will need to be impacted at least once, using computer instrumentation to gauge the piles’ carrying capacity.

Once installed, the pilings — which are hollow — will have pier caps placed on top.

“Oftentimes you might fill a pipe pile with concrete, but because we wanted to minimize the amount of wet concrete we had to handle over the lake, we decided instead to use thicker steel,” Berry said, adding of the pier caps, “Historically, you would have [connected them to the piles] with wet concrete over the lake and let it cure, but in this case we’re using what’s called prefabricated concrete caps that are designed, made [and] fabricated off site in a controlled location, and then brought to the site and installed on top of the piles.”

While the existing rail bridge has foundation pilings spaced out every 52 feet, the new bridge will feature half as many, with pilings every 104 feet.

“That does a couple things: it minimizes the number of foundations we have to build. As far as boaters are concerned, you’re always going to line up between two piers, so we’re not adding any new piers in any of the spaces where boats would pass through,” Berry said. “And it allows us to use longer spans.”

Spans are the sections of the bridge between the foundation pilings, making up the deck of the railway. Berry said spans are created by first placing girders — sometimes called beams — which distribute the weight of the train between pilings. While most of the bridge’s girders will be made from precast, prestressed concrete, Berry said steel girders will be used toward the center of the bridge, “where the United States Coast Guard has specified a vertical clearance between the top of the water and the bottom of the bridge” to be used as a navigation channel.

“The steel beams are stronger and stiffer, and they can also be shallow to carry the train,” he said.

Crews will cast and pour a concrete deck on the girder spans, and the track comes next. The railroad track will be installed in panels — made up of rail ties and metal rail — and then surrounded by ballast rock, “just like you would see on a normal railroad embankment,” Berry said.

Once track and rock is placed on the bridge deck, crews will use track maintenance equipment to “surface, compact and align the railroad,” Berry said. Surfacing vibrates the track and surrounding rocks in order to get a compact, aligned fit.

Next, crews will connect the track at the north end — just north of the Sandpoint Train Depot — and to double tracks already existing south of town.

Finally, the signal system for the new rail system will be installed and tested.

When crews constructed the existing train bridge across Lake Pend Oreille in the early 1900s, engineering practices looked a little different. For example, in order to build a foundation, workers constructed cofferdams, dewatering to the lakebed to drive timber piles and then casting piers with wet concrete.

“There are a lot of things that we do now that they didn’t do back then as far as personal protective equipment, extra training, mechanized tools — things like that,” Berry said. “So it’s a safer process.”

Design decisions and installation methods are now also chosen with the environment in mind — more so than they were a century ago. Berry said tools like booms for spill containment are readily available at the job site.

“[There’s] an increased level of environmental consideration,” he said, “and that’s understood as a responsibility now.”

While basic materials remain largely the same — steel, concrete, timber — Berry said quality has vastly improved, and more testing is performed both off site and on to ensure the integrity of the structure’s components before they enter the water.

Berry said BNSF officially began placing piles for the permanent bridge structure about a month ago, and work will continue on the project until its tentative completion date in 2023.