Representatives of internet infrastructure and service provider Ting announced Tuesday that they’re expanding their installation plans into south Sandpoint. This expansion is sometimes referred to as “Phase 2.” 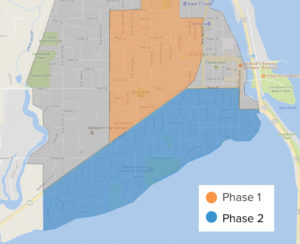 A phase 1 and 2 map of Sandpoint. Courtesy of Ting.

“Although we are announcing Phase 2 tonight, our goal is to get most, if not all, of the Sandpoint city limits done by the end of the year including west of Division and around the airport,” said Ting’s VP Networks Adam Eisner. “We are also dedicated to lighting up downtown.”

Ting announced Phase 2 during a Tuesday night community hall event at the Panida. Along with Eisner, the Sandpoint’s local Ting team was all there. Ting Sandpoint City Manager Kari Saccomanno said every Sandpoint team member is from this area, including herself.

“We believe in being hyper-local wherever we go: in our teams, our partners and especially in our community involvement,” Eisner said. “We are very dedicated to being an integral part of every community where we lay fiber.”

Fiber is offered to homes, small businesses and enterprise businesses, and consists of a physical fiber line planted in the ground.

Sandpoint is one of six cities in the U.S. where Ting is implementing their “crazy-fast fiber Internet” — offering speeds of up to a gigabit per second. Eisner said the goal is to expand into Dover, Kootenai and Ponderay, given enough demand.

Right now, residents in and around Sandpoint can pre-order fiber internet at ting.com/sandpoint. The deadline to pre-order and receive free installation in the Phase 1 area is Aug. 15.

“A pre-order acts as a vote for your neighborhood, helping us gauge demand and plan construction,” Saccomanno said.

Ting is donating $5 to the Panida for every person in attendance Tuesday night. Saccomanno said 96 people attended, so the Panida will receive a $480 donation.