The Sandpoint Eater: Tracks of my years

Last week was a milestone birthday for me, and I’m sure you can only imagine how distraught my children were that I would be celebrating it alone (if you don’t count the three-legged cat, Laurel). If you know me, you know that no one loves a party like me! My people were long faced and sad, but the thing is, I more prefer to be the host than the guest anyhow.

For years I was a private chef and event coordinator for a few very high-net worth individuals, and no party idea was too over the top or too over budget. It was like bringing my favorite Dr Suess book, Mulberry Street, to real life. These were often multi-day parties, starting in one city and ending up several cities (and states) away, because with private rails cars and jets comes much privilege.

I distinctly remember one such occasion: a 70th birthday celebration where we pulled out (at) all the stops.

With twenty-some guests and four private cars on the back of the westbound Empire Builder, our party originated in Chicago and terminated four days later in Seattle. Midway through the trip, we arrived in Whitefish and were greeted at the station by uniformed drivers, who whisked away the passengers in waiting Jammers (red busses).

Later, after the rail cars were disengaged from the train and sided on a spur track, our guests arrived back at the siding and were treated to their very own miniature version of a wild west show in a neighboring park.  Native Americans in full regalia performed traditional dances, buckskin-wearing cowboys galloped on fancy horses, and a pretty saloon girl entertained the affluent audience with her precision pistol skills, all while the train porters passed out Rocky Mountain Oysters, Whitefish Lake Caviar and other tasty samples from the local foods I had carefully purveyed.

A couple days later we arrived in Seattle, with our small fleet of rail cars on their own private short track parked at Union Station. I can’t recall the day’s activity for the gentlemen, but dressed in my best chef coat (emblazoned with galley car’s logo), the ladies and I walked the stalls at Pike Place market, hand selecting seafood, fresh pasta, cheeses and produce that would be transformed into the evening’s feast.

There were no iPhones back then, so I didn’t have access to my credit card bill, but it was not unusual to come home, review my statement and find two or three thousand dollars’ worth of charges from one day at Pike Place.

Another memorable party involved a smaller group, onboard the Southwest Chief (the Amtrak train that operates from Chicago to Los Angeles). Once the train reached Albuquerque, the cars were transferred to a short line and we were hauled backwards to Santa Fe, where we’d spend three or four days sided in the sunshine. On this trip, the client, who was chairman of a local institute, was hosting a dinner onboard the static train for his very important board of directors. I was looking for something spectacular to serve, and, after wandering around Santa Fe, I came upon The Spanish Table, the most impressive paella supply store I’ve ever encountered.

The next day, I executed one of the most daring and difficult dinners of my career. Each guest was presented with their own individual pan of paella, complete with tiny side dishes of gremolata (minced lemon zest, parsley and garlic) and cloth-wrapped lemon halves. The accoutrements were just as I had imagined. What I had not thought through well enough was the cooking procedure, and I can assure you that shaking 12 small, hot pans on a huge gas range is not for the faint of heart.

I’ve been quarantined for almost a month now, so I’ve spent a lot of time cleaning, organizing and sorting all the stuff my kids don’t want. In an upstairs closet hang a row of chef coats, each one embroidered with my name and the name of the rail car where I spent hundreds of hours, sometimes on my feet for ten to fourteen hours at a stretch. There is nowhere to donate such a garment, but I am going to wash them, cut them up and hope that they will make much-needed face masks.

Yes, how my priorities have changed over the last few years. I have attended some great events this past couple of weeks, thanks to Zoom and Facetime. With much clapping and fanfare on my part, my youngest grandson, Sammy, is proud to show off his skills that involve a deluxe new potty chair. I was able to watch and listen to my Montana grandkids, squealing in delight, when my son, Zane, surprised them with an orphaned Angus calf to bottle raise. Closer, yet just as far, in Moscow I helped a grandson through his roughest quarantine hours, and our vision became reality. The next day, his kitchen was transformed into an ice cream shop, complete with homemade waffle cones (not sure my daughter Ryanne will call for any additional ideas).

I’ve been spending most days cooking in the kitchen and most evenings in my old leather chair. I am surrounded by a lot of memories and sorting out the ones that matter. So many of my memories involve food. And crazy enough, of all the foods I crave the most, it’s my mother’s tomato soup. It is similar to the soup that was served in every 4 B’s in Montana. It brings me comfort. It’s simple, and hopefully you have the ingredients to make it. I hope it will bring you comfort as well. 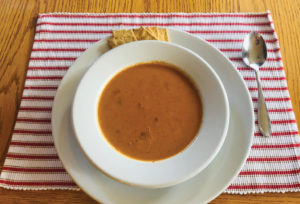 Served best with saltines, if you have them. Otherwise a grilled cheese sandwich will do nicely, too.

In a large stockpot mix tomatoes, chicken broth, butter, onion, and baking soda. Simmer for 1 hour. In a separate pot, heat cream over low heat until hot, watching carefully so it doesn’t scorch. Once heated, add to tomato soup.