The Sandpoint Eater: Still my Sandpoint

Lately, it seems all we hear (or talk about) is our ever-changing Sandpoint landscape. Last year, my daughter Ryanne published a book about the changes we’re facing throughout the region, Pushed Out: Contested Development and Rural Gentrification in the American West.

I saw plenty of changes last weekend when I took 7-year-old granddaughter Fern out on the m/s Shawnodese for our favorite “Birds of Prey” cruise. We arrived at City Beach early to enjoy a window table and lunch (topped off with a fancy lemonade for Fern) at Trinity. And, wow, I’ve never seen such a hodgepodge of oversized pop-up tents on the beach — it looked like Sunday on the Jersey shores. On our way to the boat launch, there was no parking place to be had at City Beach and, upon boarding the vessel, I overheard fellow passengers mentioning they’d had to park way over at the Amtrak station.

Far away in Southeast Asia, you often hear the saying, “same-same, different.” I have a better understanding of that mantra now. Though much remains, much has changed, and much is lost.

I miss calling Ivano’s for huge antipasto platters to go, a reward for our train crews after a successful private train excursion. I miss the sunset cocktails at Forty One South, followed by an array of sushi on Shoga’s nearby patio.

I miss Harold’s IGA and the heat lamps warming the crispy fried chicken we’d take to Dover Beach for a swim and a picnic. I miss the Smokehouse and the giant, briny pickles we took along on our impromptu summer outings on the lake.

For all the things that have changed, much remains the same, as I was reminded, perched on the bow of the Shawnodese with Fern. As we cruised near the shoreline, eyes peeled for birds of prey, I remembered taking my youngest Casey when she was the same age. More than 25 years ago, she too leaned into the point of the bow, wind in her face, to strike the famous “Titanic pose.”

I still head to Dub’s for ice cream, but now, instead of hauling Casey and her Washington Elementary School cronies, my backseat is filled with car seats and little ones, including Casey’s. Their love of overly sweet ice cream flavors rivals their mother’s.

Though often packed with more visitors than locals, I still can count on longtime vendors at the Farmers’ Market to provide me with tasty produce, baked goods, and fragrant bouquets to fill my table on Saturday mornings.

When the kids come up from Moscow, we often head to the Hoot Owl, crowding into a booth for Sunday morning chocolate chip pancakes, just as we’ve done for as long as I can remember. Occasionally an adult or two will indulge in the best-ever chicken-fried steak, still hand-pounded and slathered in darn-good gravy.

In Ponderpoint, I’ve had the same sets of close neighbors since I moved in more than 20 years ago. We look out for one another and share garden bounties and fence talk while commiserating about the massive dump trucks (driving too fast), hauling out loads of dirt and returning with bigger loads of rock to build even bigger lakefront homes.

And so it goes. I’ll continue embracing all the reasons I love Sandpoint because, in my opinion, there’s still lots more that is right with her than is wrong with her. I hear friends threatening to move. Where would we go? Though I could take a pass on winter, I can’t imagine missing out on the summer magic of my children and grandchildren gathering in Sandpoint. That will never change!

I’ll tell you what else never changes: Candyland. It’s the game that never ends. It goes on and on, my friends (unless you happen to “misplace” some of the candy-fairy cards that send you back to the start of the game). I’ve been with my grandchildren for nearly two weeks, and that’s a lot of Candyland.

It’s left me little time for cooking (besides, it’s been too hot to turn on the oven). Who cares? You can whip up this easy shrimp dinner faster than you can say, “lose a turn.”  It’s just the right amount of garlic, so please don’t be tempted to make a change.

Garlic butter shrimp • makes 4 servings
This is quick and easy to prepare — a perfect stovetop main dish. Pair it with a crisp green salad, French bread and a chilled pinot grigio. (And don’t overcook the shrimp!) 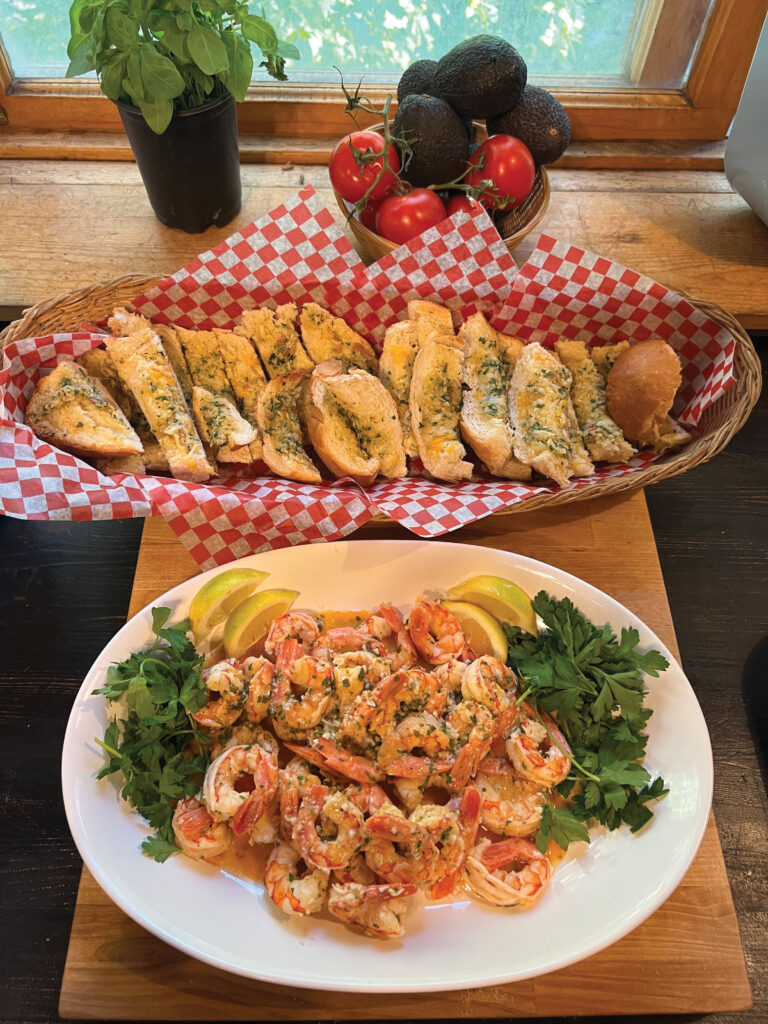 • 2 tbs capers in their brine

Heat olive oil in a heavy large skillet, over medium-high heat, until it barely begins to smoke. Place shrimp in an even layer on the bottom of the pan and cook for a minute, shaking pan, but don’t stir.

Season shrimp with salt and stir just until shrimp begin to turn pink, about 1 minute.

Stir in garlic and red pepper flakes. Cook and stir an additional minute.

Stir in lemon juice, 1 piece butter and ½ of the parsley. Cook until butter has melted and the shrimp are well coated. Remove the shrimp with a slotted spoon, place on serving platter and cover to keep warm.

Reduce heat to low and whisk in remaining 3 pieces of butter, one at a time. Continue whisking until sauce begins to thicken, about 3 minutes, then add capers in brine and wine, and whisk until well mixed.

Pour the sauce over shrimp. Garnish with remaining parsley and lemon wedges and serve immediately.