It is just a few days short of St. Paddy’s Day, and I haven’t made even a wee bit of a plan to celebrate. I’ve been known to swig a bit of green beer in Butte, Montana, and I’ve spent my share of time watching the river run green in Chicago. I’ve even counted myself lucky enough, on St. Paddy’s Day, to be perched on a worn leather stool at Durty Nelly’s, a 400-year-old pub, near Bunratty Castle in County Clare, Ireland.

But a lot of unexpected life happened to me over the past month or so, and the task of planning (or joining) a celebration felt formidable, so I imagine my day (and night) will include some reflections, along with a quiet dinner at home, and a toast to my ancestral grandfather, Mogue Doyle.

Grandfather Moses (nicknamed Mogue) Doyle, was the son of James Doyle and Ann O’Brien. He was born in Oulart Hill, Parish of Ferns, County Wexford around 1764. He was a leader of a group of United Irishmen who survived the fighting of the 1798 Irish Rebellion in Wexford (the single battle, of 13, which was won), only to be later captured and sentenced to death by the British. On the morning of his pending execution, when the guards came to prepare him for hanging, they discovered it was not Mogue in the cell but his very brave fiancée (and future wife), Judith O’Neill. Mogue had escaped the previous night, dressed as Judith, during their farewell visit.

He escaped on a fishing vessel to Cape Breton, Nova Scotia, and a few years later, seeking pardon after the Act of Union in 1801, he returned to Ireland, where he spent many years as a tenant farmer on land owned by British land baron Earl Fitz William at Oulart Hill, on the banks of the river Slaney.

I’ve poured through old records, Rebel Papers and Jail Registries at the National Archives in Dublin, and these ancient and worn court documents tell the story of how harsh their lives were during that period, when the entire families and the “house girl” all shared the same thinned mattress. House girls were no luxury — they were young girls, pawned off to families who could at least provide a young girl a meal, in exchange for house chores and child care.

I’ve always been proud of Mogue and his fight for justice and equality for his fellow countrymen. I’m not alone either. I have distant cousins with a band named for him, “Mogue Doyle,” who’ve immortalized his legacy with Irish pub tunes about the violence in Wexford and the British repression that involved death and exile.

My own children and grandchildren have become more curious of their Irish heritage, and though I still haven’t convinced anyone to name a child after Mogue (or even a pet, for that matter), everyone seems eager to learn more about him. Though lots of the stories that have been entrusted to me are anecdotal, I know many to be true. For instance, Mogue’s family existed on five pounds of potatoes a day. Sometimes they added some whey, but cream was used only for butter, or to fatten livestock. On the rarest of occasion, a bit of meat might be added to the mix and a jar of homemade Miodh (mead) passed amongst the men.

Also, according to legend passed down from no-nonsense Judith O’Neill, leprechauns dancing on moors were nothing more than the marsh gas escaping from the peat beds as they were cut and readied for fuel.

But I can tell you what’s not anecdotal: the heartiness and resilience of the Irish. There’s also an extra twinkle in their eye and a generous nature that knows no boundaries.

I’m grateful for the day we set aside to honor St. Patrick and the good people of the Emerald Isle. I’ll put it to good use by paying homage to the humble (roasted, Irish-style) potato and hoisting a mead for Mogue.

• Irish Roasted Potatoes Recipe •
If you’re ever lucky enough to have a home-cooked, Sunday dinner in Ireland, no doubt you’ll enjoy roasted potatoes. Crunchy, fluffy and crispy – they’re the perfect accompaniment for any roasted meats. The secret is parboiling them, using lots of fat and a hot oven! In Ireland, the potato of choice is the Maris Piper. Here, I use Yukon Gold. 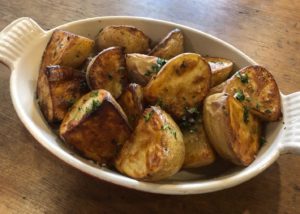 • Fat from roasted meat (or good quality oil – for vegetarian-style)

To parboil, cut your potatoes into the size chunks you want to use for roasting and put them in boiling water for approximately ten minutes, depending their size.  The outside should be soft, but the inside still raw. Don’t overcook!

Drain, shake and dry. Drying is important, so the skin will be crisp!

Pour a few tablespoons of fat/oil on a sheet pan, add the potatoes, and turn them several times. Coat well on all sides. Sprinkle liberally with sea salt.

Cook at 425°F for about 15-20 minutes, until nice and golden brown, remove from oven, turn potatoes and cook another 15-20 minutes.

Place on serving platter (or bowl) and sprinkle with minced parsley.  Serve immediately!