The film “Green Book” is currently riding a wave of financial and critical success. It recently won the Best Picture award at the 91st Oscars, and this, in turn, ushered the film into more movie theaters across the country. 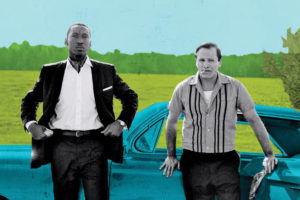 I first saw “Green Book” at the Panida in late January. I walked out of the theater having mixed feelings about the film. I marveled at the memorable performances by Viggo Mortensen and Mahershala Ali. But something was niggling me about the film. I have since seen the film again, the second time at the Bonner Mall Cinema, and now have a clearer idea of what I am bothered by in the film. Simply put, my bothersome response has to do with race.

Three things have happened between my two viewings of “Green Book,” and they come into play as I discuss my response. The first thing is the negative response that some members of the film industry had towards the film, especially the moment when it was announced that “Green Book” received the Oscar for Best Picture. Spike Lee, a respected director for over 30 years, tried to walk out of the theater after the announcement. He was not happy. Black Panther star Chadwick Boseman was caught looking over his left shoulder to a friend with a look of “it figures” at the moment of the announcement. The video has gone viral. “Green Book” was receiving what I call “b(l)acklash.”

The second event occurred during the recent Michael Cohen hearing in front of the House Oversight Committee on Feb. 27. Rep. Mark Meadows (R-NC) had Lynne Patton — a former party planner for the Trump organization and currently the overseer of public housing in New York and New Jersey for HUD — stand silently behind him. Cohen had testified that Trump was a racist. Meadows pointed at Patton, who is black, and said that “Lynne Patton says she would not work for a man who is racist.” But this did not end here. Rep. Rashida Tlaib (D-MI) called out Meadows, saying that he used Patton as a “prop.” Meadows, of course, was defensive and said that Tlaib was accusing him of being racist. She made it clear that it was a racist thing to have done what he did, addressing the action and not the person. Meadows then defended himself even more by revealing that he had nieces and nephews of color. Neither of Meadows’ actions removes the reality of a person being a racist. Just because one hires a person or has a family member who is a person of color, this does not make one immune doing racist things.

Finally, the last thing that occurred to me between my two viewings of “Green Book” was the purchase of a book on a recent trip to Pegasus Books in Berkeley, Calif. The book, “White Fragility: Why It’s So Hard for White People to Talk About Racism” by Robin Diangelo, is important and has opened this 73-year-old’s eyes and heart about race in our culture and how I have absorbed so much white privilege and advantage through laws, religion, movies, songs, newspapers, ads, politics, education and more.

Now on to “Green Book!” Ann Hornaday, a writer for the Washington Post, ends her article “Why ‘Green Book’ Shouldn’t Have People Seeing Red” with this thought: “With luck, as ‘Green Book’ makes its way to hundreds more theaters . . . it will go from punching bag, cultural signifier and political shibboleth to what it should have been all along: a movie, not a message.” She is so correct: “Green Book” is a movie, but it also has a message. For some viewers it is a movie about two men from different worlds who hit the road and have adventures along the way as they grow to learn about each other. “Green Book” falls into the tradition of a “buddy” road movie.

What has been niggling me is what the film’s subtext implies about race. Throughout the film, white Tony Vallelongo  (Viggo Mortensen) rescues black Don Shirley (Mahershala Ali) from thugs in a bar, arresting officers in a YMCA, and two youths who saw Shirley unroll a wad of bills in a bar and want to rob him. And when both of them end up in a southern jail, it is white Robert Kennedy who gets them released.

As the film unfolds, white Tony teaches black Don about what it means to be black by eating fried chicken and listening to Little Richard, Chubby Checker and Aretha Franklin. “How could you not know this music? These are your people,” says white Tony. Here we have a white man teaching a black man about blackness (“his people”) through the racist stereotypes of what one eats and what music one listens to.

Elsewhere in the film, Tony claims that he is blacker than Don. Don gets out of the car in the pouring rain and breaks down about not being accepted in either world: “I’m not black enough. I’m not white enough. I’m not man enough. What am I?” Perfect! Don is suspended between a black world and a white world with no self-identity, no power and no joy. But Tony, on the other hand, is secure and self-assured in his whiteness. He possesses no self-doubt about his color.

Alone and isolated after the concert tour, Don becomes the surprise dinner guest at the end of the film. The ending celebrates a truly “white” Christmas in Tony’s apartment with family, food, merriment and holiday cheer. Don doesn’t really belong there, but where else can he go? He is absorbed into the white world, thus perpetuating a myth of how magnanimous and generous white people can be to people of color.

This is what has been bothering me about “Green Book,” and I could write more about the film which is definitely worth seeing. Track down a copy of “White Fragility.” I am rereading it a second time and am learning about white me in my white racist America.