Adventure, luxury and good eats were a winning recipe for rail dining at the height of train travel

There is nothing quite like enjoying a fresh, warm meal while traveling. It’s largely an experience of the past, with cars and airplanes as the main modes of transportation in the 21st century. However, for almost the entirety of the 1900s, trains — complete with sleeping accomodations and extravagant dining cars — ruled the travel world. 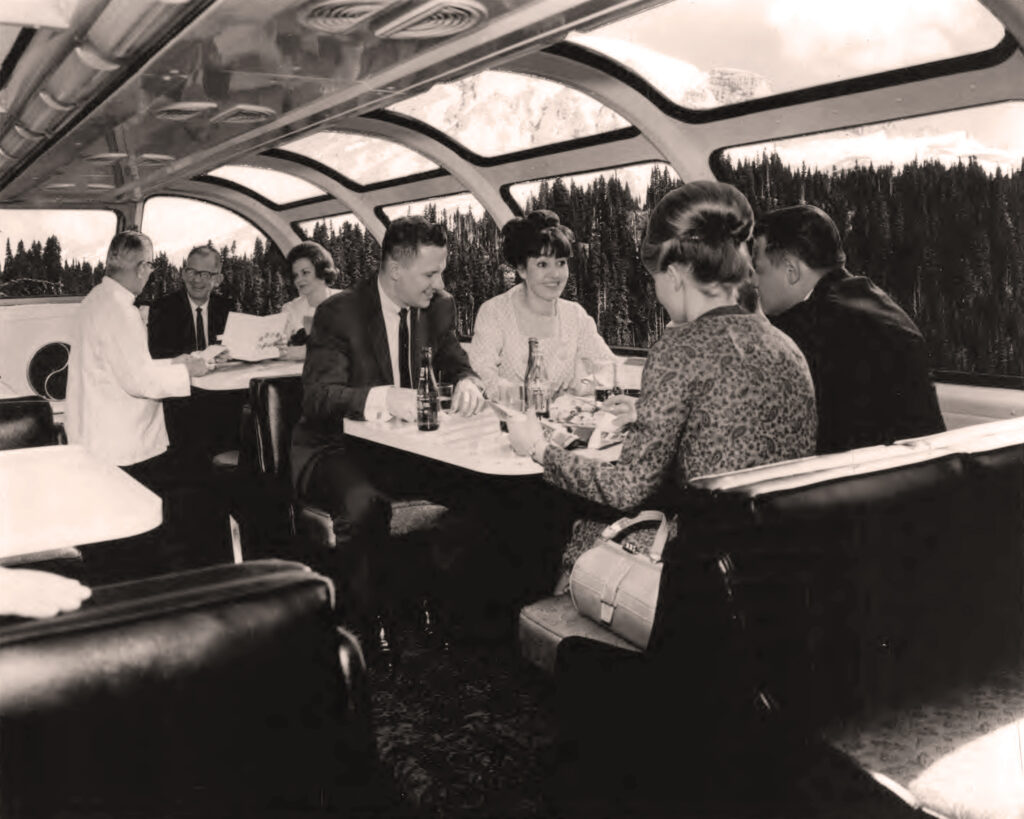 Passengers enjoy the views from a dome car on the North Coast Limited in the early 20th century. Courtesy photo.

An excerpt from a 1952 article in Trains and Travel, adapted for the introduction to James D. Porterfield’s book Dining By Rail, perfectly encapsulates the magic that accompanied a dining car experience at the height of train travel. The author, having just consumed a meal of steak, salad, piping hot rolls and coffee, returns to his quarters full of food and contentment:

“As you settle in you can’t help but wonder about the 85-foot dining car, a streamlined restaurant running through the night at 70 miles an hour. How did such a convenience come to be at your disposal? How the devil does that chef turn out a meal like you’ve just had, with only a handful of square feet of working space? You have enough trouble at home in a kitchen that seems bigger than the whole diner. And you don’t have waiters underfoot, or a hundred people to feed, or a five-entree menu. And where does he get all that food in the first place, and how does he keep it so fresh and attractive? And the waiter. How does he balance that loaded tray over his head on just the palm of one hand? They were busy tonight, yet your meal came off without a hitch. Marvelous. You can’t wait for breakfast.”

The wonder of such an incredible culinary feat continues to perplex and enchant historians and train enthusiasts alike, who now understand such luxurious commodities are a relic of decades gone by. With passenger trains now few and far between, and modern rail accommodations more simplistic, train dining like that experienced in the 1950s no longer exists. 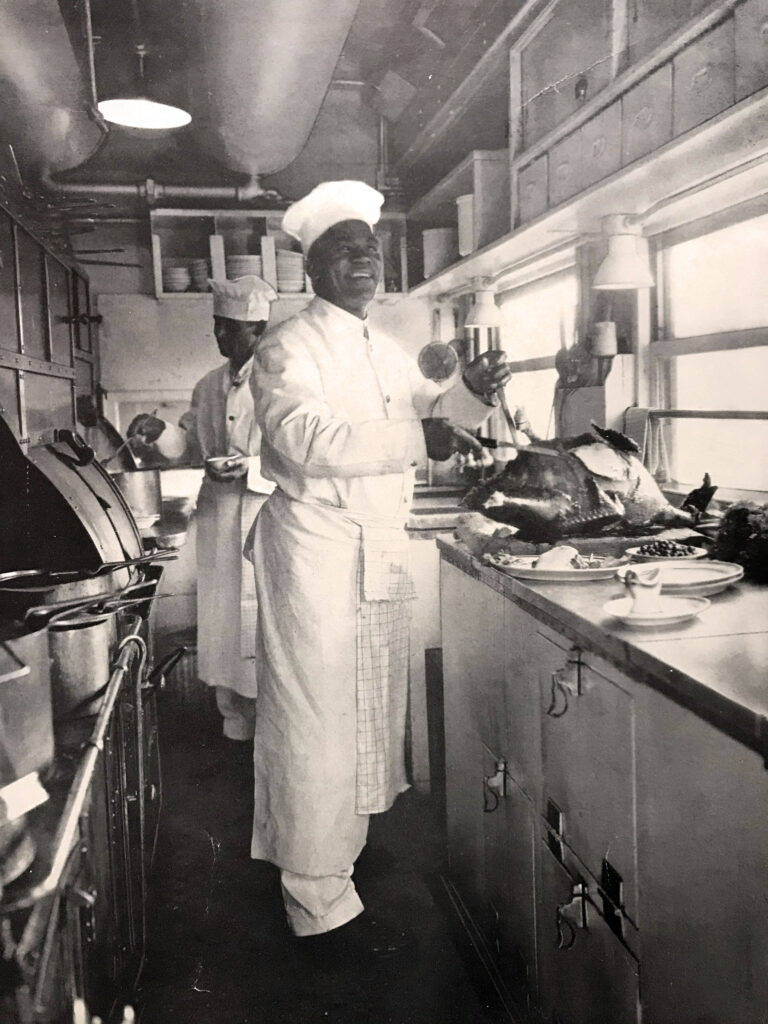 Thanks to meticulous record keeping and the efforts of people who love dining cars the most, the history can be shared and even replicated in the home kitchen.

The evolution of train dining

During early train travel in the mid-19th century, passengers were tasked with packing their own food baskets; but, according to BNSF spokesperson Courtney Wallace, those baskets wouldn’t always last for the length of the journey. She said that sometimes a young boy, known as a “news butcher,” would roam the train selling fruit, sandwiches and newspapers.

Things changed with the invention of the Pullman car and, soon after, the first ever dining car: The Delmonico. Complete with a kitchen and full permanent staff of chefs and waiters, Wallace said a dining car might serve upward of 250 meals a day.

“When Northern Pacific debuted its express service to the West Coast, the North Coast Limited, on April 29, 1900, the dining menu was as rich as the sights viewed from the railcar domes,” she said. “As passengers traveled from Chicago through Yellowstone National Park and all the way to Seattle they were encouraged to stop by the railcar for friendly service, good conversation and a hot meal finished off with delicious desserts,” such as the Northern Pacific Devil’s Food Cake. (Find the recipe, courtesy of BNSF archives, on page 17.)

Trains and, in turn, dining cars, continued to see advancements throughout the century that followed.

“[W]hen you look back on holiday seasons past, you may have fond memories of cross-country road trips or a tight-knit gathering with family members,” Wallace said. “But there was a time when the annual trip home might not have been in a car, but aboard the most innovative transport of the day: The Chicago, Burlington & Quincy’s Zephyr streamliners.”

The streamliners were made great by their lightweight frame design and modernized diesel engines. Passengers headed home for the holidays on the Zephyr enjoyed seasonal offerings from the dining car, such as the autumnal dessert of fried apples. (Find the recipe, adapted from Dining By Rail, on page 17.)

Harnessing magic for the modern age 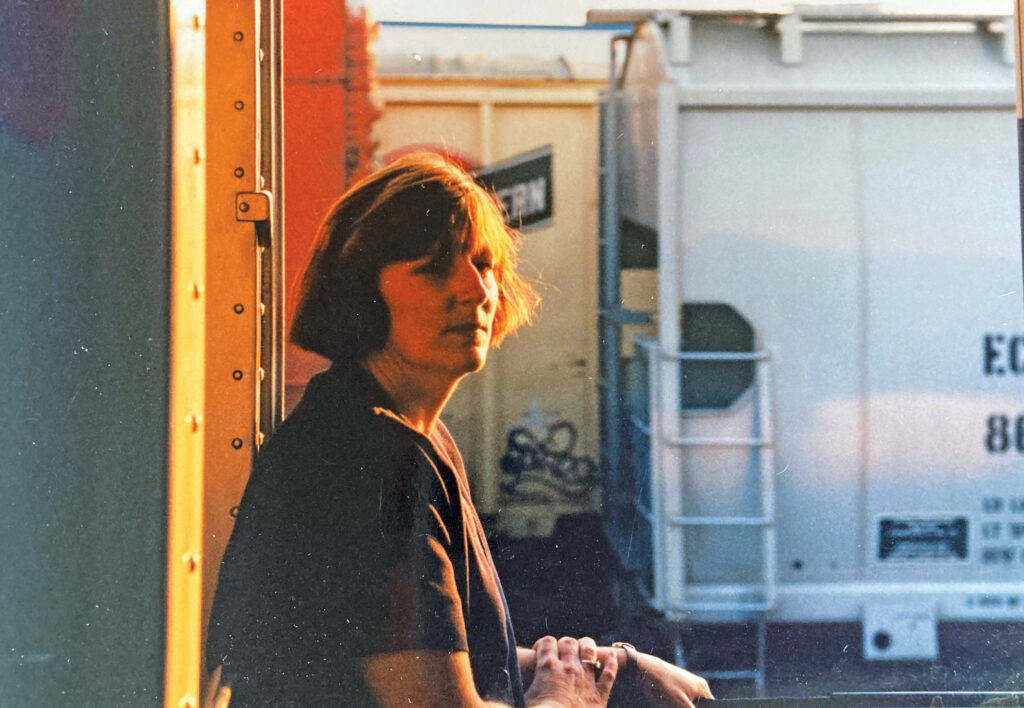 Marcia Pilgeram in 1995, during her train catering career. Courtesy photo.

Marcia Pilgeram — longtime travel consultant and food columnist for the Sandpoint Reader — took her first solo train trip in the late 1960s around age 14, traveling from Butte, Mont., to California to spend the summer with her grandparents. With a picnic basket of food from her mother in tow and $20 of spending money for the summer in her pocket, it didn’t take Pilgeram long after stepping onto that train to discover her true love: railroad dining.

“I would get on those trains, I would stash the food they made me and I would spend all of my summer vacation money in the dining car,” she said, “and I thought it was the most amazing experience of my life.”

Pilgeram’s life is peppered with stories of entrepreneurship — from starting a restaurant to working as a travel consultant — but no job combined her many passions quite like the years she spent overseeing kitchen operations on trains all over the United States.

From catering for a train company in the early ’90s to owning her own train travel business — Montana Rockies Rail Tours — between Sandpoint and Livingston, Mont., into the mid-2000s, Pilgeram knows what it takes to produce stunning meals while the train keeps moving down the tracks.

But while the dining experiences were stunning, the work behind the scenes was often brutal.

“It’s the hardest work,” she said. “Sometimes — we called them one-trippers — somebody [that is, a worker] just wouldn’t come back, or they’d just get off the train and we’d never see them again.”

What made rail dining work so difficult stemmed largely from the demanding preparation needed to feed people in a small space.

“You had to plan your food so well. You had very limited refrigeration, even less freezer space,” said Pilgeram, who often shared her bunk with loaves of bread due to limited storage. “You couldn’t stop and get anything — you know, the train stops weren’t that long — although on occasion you’d pay someone an outrageous sum of money to bring something to a train, most of the time cigars for the old men who forgot their cigars.” 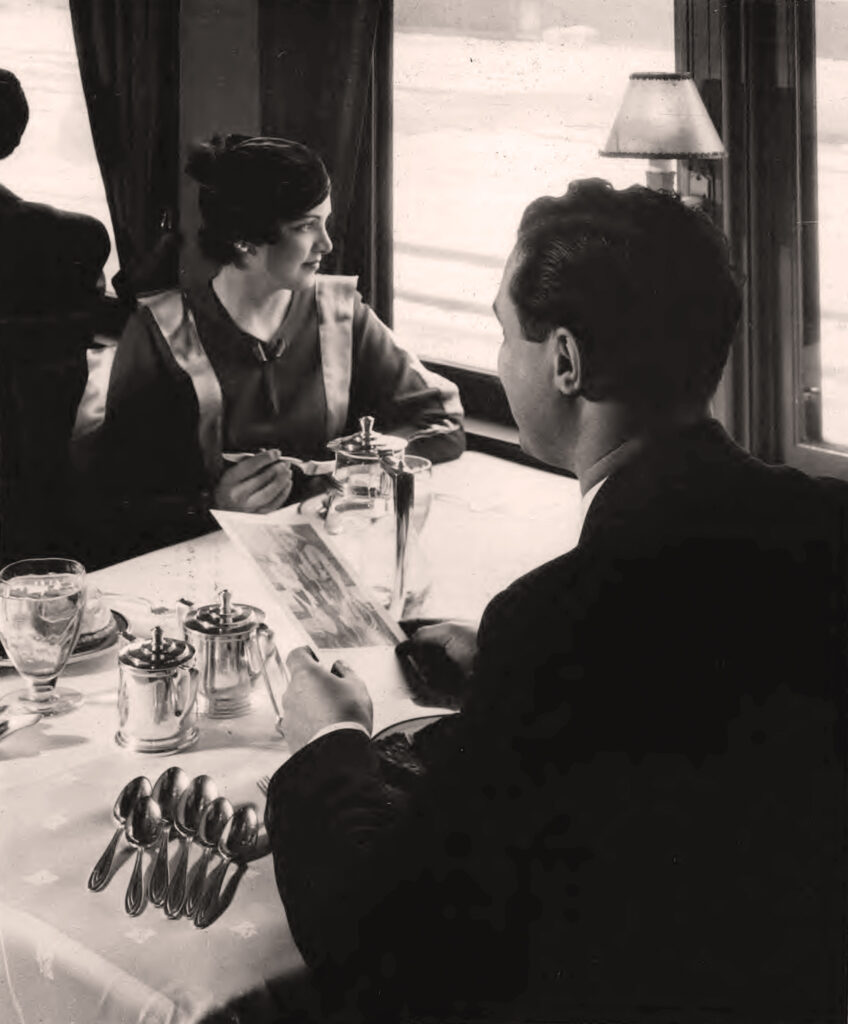 Travelers seated in a dining car in 1934, when amenities like silver and linens were commonplace for train travel. Courtesy photo.

What’s more, Pilgeram tried to stay true to the signature dishes that railroads served in their heyday, depending on where she might be catering: crab cakes on the East Coast, grits and gumbo in the South and the Great Big Baked Potato — the Northern Pacific Railroad’s signature offering — in the Northwest.

Still, Pilgeram admits that her era of rail dining was not near the endeavor it was during the height of train travel, when chefs who worked over wood- or coal-burning stoves all day had nowhere to rest but a small jumpseat that pulled down from the wall. Trains were staffed by hardworking, dedicated individuals set on making travel as comfortable and convenient as it could be.

“They had barbers, they had secretaries, they had babysitters,” Pilgeram said of trains at the peak of rail travel.

A combination of liability and new technology has made train travel and rail dining largely irrelevant, as freight dominates the tracks and most people take to the skies when they need to take a trip. Still, the art and luxury of a moving meal in a state-of-the-art dome car remains close to the hearts of many — especially Pilgeram.

“There’s just something magical about a dining car,” she said.

In a large mixing bowl, cream butter and sugar. Add eggs, one at a time, beating well after each addition. Stir soda, salt and vanilla into milk, and add to first mixture. Add sifted dry ingredients, mixing completely. Pour into a 9×13-inch greased cake pan. Bake at 350 degrees Fahrenheit for 35 minutes.

Wash apples and remove core, but do not remove skin. Cut each apple into 12 wedge-shaped slices. In a large skillet over medium heat, melt bacon drippings and butter together. Add the apple wedges and sauté for about 15 minutes without cover, turning once. Sprinkle with sugar, cover and continue cooking, turning several times until browned well. When properly prepared, apples will have a nice brown color and be tender (not cooked to a mush) and have a sour-sweet taste.