Recently, I took a weekend trip to southern California to host a dinner for clients. My eldest daughter Ryanne joined me, and it was a rare getaway for my oldest daughter. I assured her that once my Saturday evening commitments were completed, Sunday was all hers. And though I consider myself to be a very skilled driver, I acquiesced and agreed to her request (demand) that she would own the driver’s seat of our rental car. 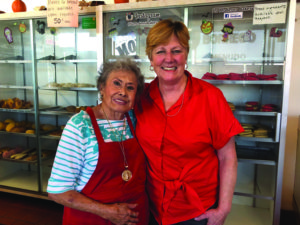 Even though my bag didn’t arrive at LAX, and despite an unplanned emergency shopping expedition to the Newport Beach Macy’s (with an Alaska clothing voucher in hand), we still made it to our hotel in relatively good spirits, with time remaining to gussy up and assemble gift bags of Idaho-huckleberry lagniappes. Then, right on schedule (with a bit of help from our friend GPS), we arrived punctually to our Dana Point dining destination.

It was a fun evening, filled with rare steaks, lively conversations, plenty of wine and an impromptu invitation for Ryanne and me to join one of the dinner guests for Sunday brunch the following morning. I accepted without hesitation and seconds later remembered my “Sunday is yours” promise to Ryanne. Generally, she’s a good sport, and I was relieved when she gave a nod of approval.

The next morning, we sat deck-side at a beautiful oceanfront restaurant in San Clemente, watching surfers of all ages waiting for the perfect wave. Over a basket of warm muffins and seafood omelets, our host, Blanca, told us about her mother, Martha, a 90-year-old immigrant who still works at the Mexican food shop and bakery she founded in the San Gabriel Valley, along with her husband, Guillermo, nearly 50 years ago.

I’m forever curious about cultures and cuisines and was hungry to learn more about La Moderna Bakery. As we lingered over coffee, I pressed Blanca for every detail about her mother and her famous tamales. Blanca comes from a long line of tamale makers and relayed a story from her own mother’s childhood in Guadalajara, where Martha had watched as her mother boiled cauldrons of corn over an open fire to prepare the masa for their tamales.

We bid a fond farewell to Blanca and headed towards our rental car for Ryanne’s promised day of sunshine and road tripping on Coastal Highway 101. We settled into the car and Ryanne loaded the address for Crystal Cove into our fancy navigational system. I was busy with my phone when she asked me, “What are you looking at?”  She knows me well, and no doubt knew what was coming next. “Well, I just wondered if we would be anywhere near Martha’s bakery today?” I asked.

We hiked along the rocky outcroppings, then dipped our toes in the surf of Crystal Cove before Ryanne, herself a curious sociologist, suggested that once we’d driven the 101 to Long Beach we could head east for a tamale fix.

Using her superlative driving skills and me — trying my best to give fair warning for upcoming exits — we navigated three crazy California freeways, including dodging a spilled load of large-sized Fisher Price plastic toys.

Google Maps led us off the freeway into a predominantly Hispanic area of Whittier, where we located La Moderna in a small strip mall filled with other Mexican vendors. I knew we were in the right place because I instantly recognized Martha from her photo, broom and hose in hand, scrubbing down the entrance.

We introduced ourselves and It seems they may have been waiting for us. Besides Martha (a remarkably beautiful and young-looking 90-year-old), we were greeted by three more generations of the family and loaded up a bag of tamales: red pork, red beef and green cheese, along with beans, spicy sauce and carnitas. Armed with our bag of food, we drove to our upscale hotel in Marina del Rey, checked in, spread our feast on a small table near our balcony, sipped beer and watched the sunset against the Pacific Ocean while eating the greatest carnitas I have ever put to my lips. The tamales were loaded with spicy filling and creamy masa, and it turned out we didn’t need the in-room refrigerator for morning leftovers (we did, however, need a long walk after polishing off the entire feast).

Besides the savory foods at La Moderna Bakery, there were display cases filled with sweet breads and bolillos, and a line of patrons choosing their favorites. Apparently at Christmas time, starting at 5 a.m., customers are lined up around the block to collect their pre-ordered tamales. I can only imagine that in preparation for Día de Muertos (“Day of the Dead”), which is celebrated from Oct. 31 to Nov. 2, the same customers will be lined up for sweet treats to celebrate the dead.

One of my favorite Mexican sweet breads is pan de los muerto (“bread of the dead”). A round loaf adorned with pieces of dough to resemble bones, it’s prepared and served the last few days of October through the first of November. It’s a great family project to assemble and bake to honor the dead, not to mention a super delicious treat for the living. 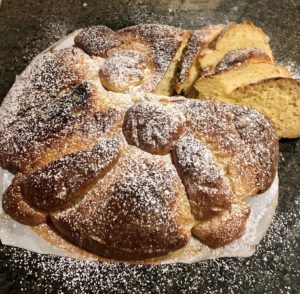 In the bowl of a stand mixer, proof the yeast in 1/2 cup of warm water, then add 1/2 cup of flour, butter, sugar, anise seed and salt. Using a dough hook, mix the ingredients until they are well mixed.

In a separate small bowl, whisk together eggs, remaining water and orange zest, and add to mixer bowl along with another 1/2 cup of the flour. Mix until combined.

Add the remaining flour 1 cup at a time, mixing between additions, until a soft dough forms. Knead in mixer for another minute until just pliable but not sticky.

Turn dough into a lightly greased large bowl, cover it with a damp dish towel and let rise in a warm area for 1 hour or so (until doubled in size).

For two loaves, separate the dough in half, then split off about 1/4 of the dough for each loaf and use to make bone shapes to drape across the loaf.

Shape the rest of the dough into a flat-bottomed semi-sphere. With a damp finger, moisten and place the bone shapes on the top of the loaf and press gently so they adhere. Let the dough rise for an additional hour.

Bake the loaf in a 350-degree Fahrenheit oven for about 45 minutes (35 minutes for smaller loaves). With a pastry brush, glaze the bread during the last 10 minutes of baking. Watch the bone pieces — you may need to cover with foil so they don’t over-brown, especially after glazing.