The Sandpoint Eater: Lessons (and lagana) for Lent

Lent, the solemn religious period observed by Christians around the world, comes late this year. In these parts, it’s a good thing because maybe we’ll finally see some signs of spring by Easter Sunday (April 21).  Lent is observed differently by different sects, but for we Roman Catholics kids (who grew up wielding fish-sticks every Friday), it basically means 40 days, between Ash Wednesday and Easter Sunday, sans anything that (even remotely) looked or tasted delicious.

St Patrick’s Day was an exception, a special day for dispensation, but if my memory serves me right, that was mostly a day reserved for alcohol-consuming adults, of which there were many in the blue-collar mining community of my youth.

I can’t lie: As a kid, I dreaded Lent like a bad hair day. And since my family didn’t celebrate any of the pre-Lenten festivities, like Shrove Monday or Fat Tuesday, I never had a chance to over-indulge before our chuck wagon came to a screeching halt for 40 long days (and ice cream nights). To this day, I am fascinated by the centuries-old traditions and foods that are associated with Lenten preparations.

The pancake has a very long history of association with Lent and can be found in cookbooks that are nearly 500 years old. It was a way to use up all the rich, perishable foods in a household. The ingredients were also symbolic: eggs for creation, flour for the staff of life, salt for wholesomeness and milk for purity.

Besides making pancakes, the tradition of throwing or tossing them is nearly as old. In the UK, pancake races form an important part of the Shrove Tuesday celebrations, an opportunity for large numbers of people, often in fancy dress, to race down the streets tossing pancakes. The object of the race is to get to the finishing line first, carrying a frying pan with a cooked pancake in it and flipping the pancake as you run.

The most famous pancake race takes place at Olney in Buckinghamshire. According to tradition, in 1445 a woman of Olney heard the shriving bell while she was making pancakes and ran to the church in her apron, still clutching her frying pan. The Olney pancake race is now world famous. Competitors have to be local housewives, and they must wear an apron and a hat or scarf.

Every country has its own version of pancake. In Portugal, it’s the Malasada, which contains yeast and is more donut-like; in Norway and Denmark, their bun-like version is known as Fastelavnsboller. In Newfoundland and Cape Breton, small divinatory tokens are cooked into the pancakes, which the young children are delighted to discover. Blinis are the pancakes associated with festivities in Ukraine and Russia, and in Scandanavia—their semla pastries are filled with almond paste.  Germans prepare pfannkuchen, a thin, crepe-like pancake that’s dusted with powdered sugar and served with jam.

Besides pancakes, another traditional Shrove Tuesday food is pea soup, popular in Estonia, Iceland and Finland, and served along with a regional pancake or pastry selection (not my pairing of choice).

Around the world, in addition to foods, over-the-top grand parties and carnivals that go on for days take place before folks settle in for the sacrifices of Lent. Besides the more well known, like Mardi Gras in New Orleans and the Carnivals of Rio de Janeiro and Venice, there are dozens of similar dancing, feasting and music events taking place in every corner of the Globe: Kerala, India; Sitges, Spain; Fasching and Cologne, Germany; and Martinique. Lavish parades, wine tastings and rituals filled with myth, merriment and mayhem go on for days.

I always wanted to attend Mardi Gras, but not anymore, folks. I found my pre-Lenten destination!

In some cultures, another forbidden Lenten food is cheese. To prepare for this major sacrifice, cheese lovers gather in Cyprus for the tradition of “Tyrini,” which is an entire week dedicated to eating cheese. Greeks, the largest consumers of cheese in all of Europe, sound like they know how to throw my kind of party.

Man cannot live by cheese alone, and the Greeks pair it up with Lagana, a delicious Greek flat-bread, similar to focaccia. It is traditionally baked on Shrove Monday (or Clean Monday). It’s simple to make and delicious to eat. Pair it up with some feta for your Fat Tuesday feast.

Lagana recipe • Makes 2 large loaves • Easy and Delicious!
This bread, similar to Focaccia, is made on Clean Monday, which is the beginning of the Lent season in Greece 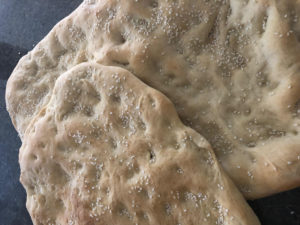 In a small bowl, dissolve the yeast, sugar, tahini, wine and ¼ cup of the bread flour in warm water. Cover and let stand for 15 minutes until begins bubble.

In your standup mixer bowl, or a large bowl, place 7 cups of flour and salt, mix with a whisk to blend.

Stir well with a wooden spoon.

Start your mixer on medium and mix for 5-8 minutes until it comes together and becomes smooth.

Shape dough into a ball. Rub with olive oil. Place in an oiled bowl, cover and leave to rise. Let stand for 2 hours until doubled.

When dough has risen, remove from bowl and knead until it’s down to it’s original size.

With a rolling pan, roll out the dough into a flat oval shape about 15 x

6 inches. Cover and let rise for 45-50 minutes until doubled.

Place in sheet pan and brush with olive oil and cover with sesame seeds.

Bake for 30 minutes in a 450 degree oven until golden brown. Place on wire rack to cool immediately.