The Sandpoint Eater: Bubble up

I was raised on penny candy (which I now call highway-robbery candy). Even with inflation, I am hard pressed to pay upwards of 50 cents (or more) for the single treats I once purchased for a penny or less (some selections, like “red coins,” were only two for a penny). In small town east Helena, Mont., where I grew up, we had the Mecca of all candy stores: Lucky’s Fountain, run by crabby, old babushka scarf-wearing, Mrs. Rusek.

Bless her heart. Today, I envision her lounging at her well-earned seat in Heaven because she long ago served her time in Hell, behind the triple-shelved glass candy counter, stooped over the bottom shelf, dropping our wisely chosen pieces into the small, brown, Kraft paper bags. Finally, we’d ask the million-dollar question: “How much is that?”  “Twenty-three cents,” she’d answer. Near that point of no return, it was time to turn in some cinnamon bears for a Sixlet or two.

If you were flush, a dime would buy you a Mallo Cup and a Bubble-Up soda. First, you’d take a big bite of the candy bar and immediately wash it down with a huge dose of soda, causing a foaming, mini-eruption in your mouth. I was easily led down this dark path and, though I felt like I was doing something criminal (besides wasting a dime), it was especially exciting if the sweetly acrid foam found its way to your nostrils.

Who even remembers Bubble-Up soda pop? It was created more than 100 years ago, in 1919, in Ohio and was later purchased by the Dad’s Root Beer Company. Processed with a hint of lemon and a hint of lime, it was my go-to drink for many years, even after I gave up the Mallo Cup challenge.

Now, as my kids are trying to navigate school groups and speaking in COVID-19 vernacular (“podding-up or bubbling-up”), I can’t help but think of that soft drink from my youth.

I often think of my youth these days. I know we had parents, but I’m not sure where they were when we’d grab leaky tire tubes from our garages and roll them down Main Street, stopping briefly at Mrs. Rusek’s for sweet fortification before launching our barely-waterproof floats into Prickly Pear Creek, where we’d bob along, carefree, as far as the current would take us. Speaking of “bubble-up,” sometimes, we’d leave the inner tubes home and head, instead, to the pools of warm water flowing from the American Chemet plant for an afternoon soak (now I shudder). What didn’t kill us…

It was all idyllic and wonderful and, in spite of myself, I flourished in those thermal pools on my summer diet of fruit-stripe gum, Pom-Poms, Black Crows, Junior Mints, Sugar Daddies and red coins, dwelling on the mysteries of life, like, how did my teenage sisters’ bags of Lucky’s Fountain penny candy last them for an entire week?

I also still have a penchant for those candies of my youth, but, yikes, last time I looked online at oldtimecandy.com, a two-pound box of my favorite 1960s assortment was $27 plus $9 for shipping. Kind of steep, so I’ll just continue the homemade treats tradition.

I came by my treat-snack stashing honestly. My mom made scads of after-school cookies and treats. When I was a kid, we had an extra freezer in our rumpus room, and now I know why she kept it locked: It was heaped with treats. There was a plethora of Tupperware containers and tins, filled with a variety of cookies and different sweet-type breads, which she would dole out, modestly.

Summer’s end in Montana was not unlike ours used to be here. We harvested our gardens, bought the kiddos new shoes, fulfilled the long supply lists from enthusiastic teachers, and baked and froze after-school snacks.

I’m trying to figure out how to be helpful, now that Ryanne’s family has carefully bubbled up into a pod in Moscow. Given I have this darn cat, who requires insulin twice a day, my usefulness is pretty much limited to having the kids (there are six in the pod) come here, two at a time, for “Camp Mimi days,” which will be project-based learning experiments (if only I can get my hands on some Mallo Cups). I’ve also been trying to stockpile snacks, but, apparently, I am not as strict — nor feared — as was my mother.  Last week I sent them home with two loaves of butterscotch banana bread, which didn’t even last until the first day of hybrid school.

If you’re looking for a cool school snack (before, during or after class), look no further than this delicious banana bread. It bakes and freezes well (hint: if freezing, it will last longer if you hide your loaves in empty, frozen vegetable bags). 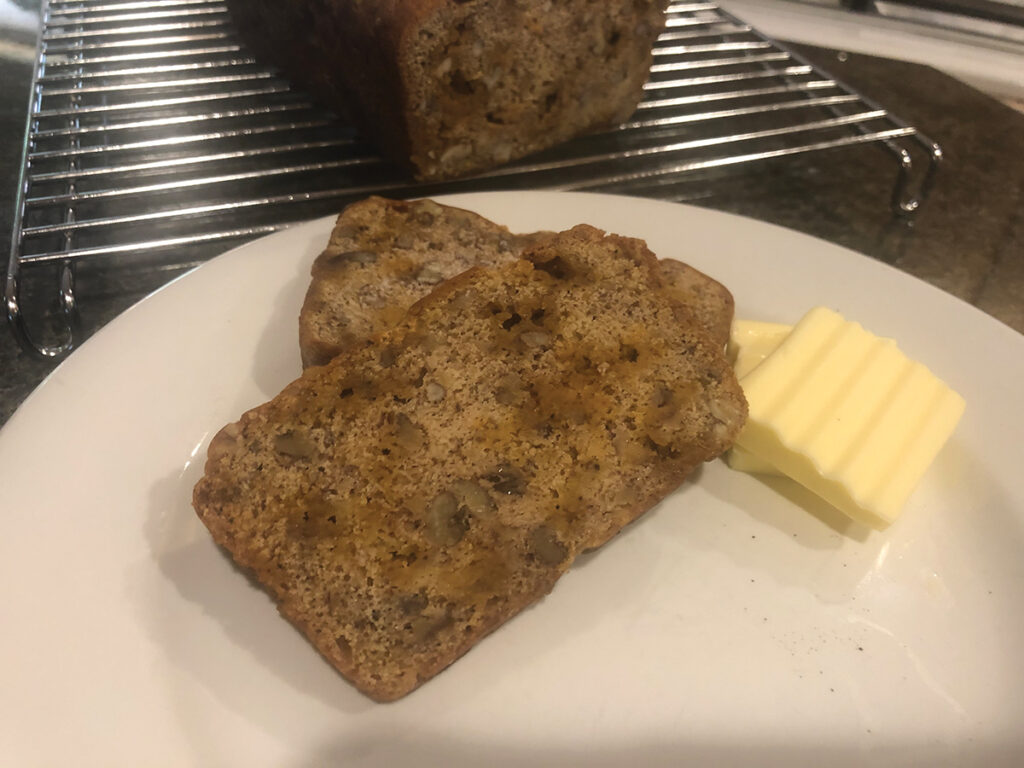 Browning the butter really adds a depth to the flavor profile of this moist and flavorful bread. I often make this for holiday gift giving. Yield one delicious loaf — though this recipe easily doubles. Slather with butter or let it stand alone.

Melt butter in a small saucepan over medium heat; bring to a low simmer and cook, stirring frequently, until butter is browned and foamy, with visible browned, solid bits — about 7-8 minutes. Set aside and stir a couple times until cooled to room temperature, about 15 minutes.

Bake in the preheated oven until a toothpick inserted near the center comes out clean, about 45-55 minutes. Cool on rack for about 10 minutes and carefully turn out. Wrap and refrigerate (or freezes very well).