The Sandpoint Eater: A taste of Cuba

All I can think about, since returning from a recent trip to Cuba (I traveled on an Educational, People-to-People visa), is a repeat performance.  Cuba was everything I had hoped for, beginning with my arrival. No sooner did our flight touch down then the passengers broke out in tearful and loud applause. Most onboard were Cuban, and though it’s now common for expats to visit relatives in Cuba, it’s not something they yet take for granted. I grew up around displaced Cuban children, and I can only imagine how joyful those reunions must feel.

During the early 1960s, thousands of children were airlifted out of Cuba in a covert mission named Operation Peter Pan, aided by Catholic Charities. It was the largest mass exodus of unaccompanied minors in the history of the U.S., and the plan was to quickly reunite these children (known as the “Pedro Pans”), with their families. But before most of the adults made it out of Cuba, the new government shut down the Miami airlifts, leaving thousands of children of all ages in the care of the Catholic Church.

These kids were sent to various far-flung locations in the USA, including Idaho and Montana. Once they arrived, I remember my mother volunteering at our Catholic orphanage. The recipients of her seamstress handy-work were the temporarily orphaned Pedro Pans.  Much to my father’s dismay, the older boys were housed near our home, and I still remember those handsome, fast-fast footed Cuban boys, dancing up a storm and wildly twirling my light-footed teenage sister, for hours on end, in the family rumpus room (with me, the 8-year old chaperone, watching every move).

From that time on, I have always envisioned Cubans to be lively, warm and vibrant. And upon arrival in Cuba, I wasn’t disappointed. Street bands are everywhere!  Even our finger-tapping cab driver, well into his seventies, sang along with his radio, from the time we left the airport until we arrived at our hotel (his only break in song was to proudly point out the stadium where he and his entire family watched the Rolling Stones perform in 2016).

Havana is loud, colorful and welcoming, and this year Cubans are proud to be celebrating Havana’s 500-year anniversary, along with their diverse cultures. For many years after the revolution, Cubans were forbidden to discuss their ethnic backgrounds, as they were all the same, “Cuban.”  Now, they are free to speak of their mixed Spanish, Indigenous and African backgrounds, along with their religious traditions.

There’s lots of revitalization happening, and, according to locals, the culinary scene in Cuba has seen vast (and tasty) improvements too. Restaurants are mostly for tourists, though, as it would take a week’s pay for a local to splurge on such a meal. Many Cubans still rely on government rations for their home cooked meals.

While the majority of restaurants are still owned by the state, there’s now an opportunity for private individuals to own small restaurants (and other small enterprises as well). Not surprisingly, with any state-owned “business,” people who work there have little passion for the food they prepare and barely do justice to Cuban cuisine.

“Paladares” are restaurants as we know them. They are privately owned and are the best places to sample “real” Cuban food. The prices of a full meal at a paladar vary.  Havana has several really great paladares, including my favorite, El Cabron.

A “Casas Particular” is another way to sample “real Havana.” It is the equivalent of our “bed and breakfast.”  Many Cubans who have a couple of spare rooms in their house rent them out to travelers. Staying at a Casa Particular is the best way to experience an immersion into Cuba and eat some amazing Cuban dishes!

Procuring foodstuffs, even at Gran Hotel Manzana Kempinski La Habana Cuba (the newest luxury property, where I stayed), is a challenge. Menus are predicated by what’s available and delivered in any given day. As the manager at the hotel explained to me, even five-star restaurant meal planning is risky business.

Many of the newer, private establishments rely on producing their own foodstuffs but still rely heavily on Cuba’s staple products of chicken, pork, beans, rice and plantains, evident with the daily specials. Though their staple ingredients may be limited, their ways of mixing spices and flavors is boundless, as I learned when sampling endless (and delicious prepared) plantains.

Every meal I ate included a plantain, in one form or another. Similar in texture and taste to a banana, they can be prepared fried and salty, called tostones, or stewed and sweet. A popular starter on many menus is tostones rellenos, which is fried plantains stuffed with anything from garlic shrimp to spicy beef.

And let’s face it, everything may have tasted a little better, washed down with copious servings of mojitos, right?  Rumor has it that Ernest Hemingway enjoyed his in the still operating La Bodeguita del Modio. I certainly enjoyed mine there.

Do you suppose Hemingway brought his favorite mojito recipe back to his beloved Idaho? Can mojitos be enjoyed in the dead of winter? You be the judge. 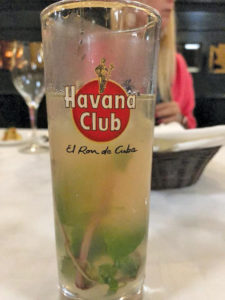 In an 8-inch tall glass, add the sugar, lime juice and mint leaves.

Using a muddler (or wooden spoon), gently muddle the mint leaves for about

10 seconds or until the mint aromas are released.

Add the quartered lime pieces, rum and ice to the glass. Gently stir (from top to bottom) to combine and bring the leaves up from the bottom of the glass.

Serve with a straw, and garnish with a mint sprig and/or lime wedge.