The platforms of Idaho’s GOP and Democratic Parties

Over the summer, the Idaho Republican and Democratic parties went to work on their platforms. What emerged were revised documents that both, in their own way, reflect evolving partisan identities on the national stage. 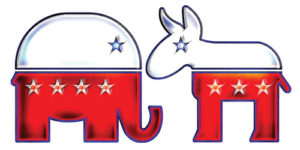 In July, Idaho Republicans gathered in Pocatello to pass a platform that reflected the national party’s focus on free-market economics, limited government and socially conservative values as dominating priorities. The Idaho Democratic Party, meanwhile, adopted a platform this summer considered by many to be one of the most progressive in the nation, with legal recreational marijuana and living wages among its concerns. In many ways, it echoes the rhetoric of class-conscious Democrats pushing the party in a more progressive direction.

The party platform calls for cannabis to be considered as a legal medical option and a recreational choice for individuals 21 and older. It recommends that agricultural hemp be available for cultivation by Idaho farmers and that tax revenue from cannabis be directed toward statewide improvements.

“We believe all cannabis tax revenue should be directed to additional educational funding and infrastructure improvement in our state,” the platform reads.

The ongoing campaign to expand Medicaid for Idahoans unable to secure health insurance made its way into the Democratic platform, too. It was one of many health care-related platform items, which also called for increased mental health care availability, the legalization of CBD oil, access to reproductive medical care and abortion. On the whole, affordable and easily-accessed health care is the defining theme of the plank.

“We believe that no one in Idaho should die from a preventable illness or go bankrupt due to medical expenses and prescription drug costs,” the platform states.

Economic policy in the platform emphasized a sustainable wage and cost of living for working- and middle-class Idahoans while asking more from wealthy residents and businesses. Among the specific planks are support for a graduated corporate tax rate and “job creation through sustainable agriculture, mining, timber and manufacturing, while expanding industries such as technology, clean energy and tourism.”

Other issues in the platform include a fully-funded education system complete with competitive compensation for teachers and support for compassionate, comprehensive immigration reform. View the full platform at https://idahodems.org/about/platform/.

The Associated Press reports that in discussing revisions to the GOP party platform, Republicans clashed over immigration in particular. The GOP platform already stated that “securing the national border must be a priority for our country.” But in keeping with the no-tolerance tone for illegal immigration set by President Donald Trump’s administration, many Idaho Republicans argued that the party should take a harsher stance against illegal workers.

Idaho’s reliance on illegal labor in various agricultural operations is a well-known issue, and some Republicans argued that those employers should be held accountable, the Associated Press reports. It was an argument that triggered heated push-back from Republicans who emphasized protecting Idaho agricultural operations. Ultimately, the proposed amendment was scrapped in favor of maintain the platform’s existing stances on immigration.

Another issue of concern was the party’s continued opposition to same-sex marriage. The Associated Press reports that Dom Gelsomino, an openly gay Republican legislative candidate, argued for removing the platform plank because the government should have no involvement in marriage. Gelsomino’s effort failed, and the following was added to the party’s opposition to same-sex marriage: “We recognize that the definition of marriage and its administration is not subject to federal authority and that Idaho is authorized to nullify any federal congressional act, federal mandate or court opinion that is contrary to traditional marriage.”

Otherwise, the Republican platform is much the same as its previous iteration. Aside from cleaning up a few typos, the other changes of note include a declaration that the Unites States is founded on Judeo-Christian values and that early education choices are best left to the family and private enterprise, the Associated Press reports.