Ruling may come in the next week, though trial date still set for April 28

A ruling is due within 30 days — and may come as early as next week — in the case against Lake Pend Oreille School District challenging the results of the November 2019 levy election. 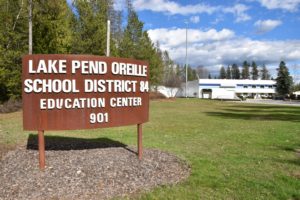 The election contest, brought by Bonner County resident Don Skinner, alleges the district violated Idaho law by failing to include tax impact statements on both the sample ballot and measure that went before voters on Nov. 5, 2019. In so doing, his complaint argues, the election was compromised and should be re-run.

First District Judge Barbara Buchanan heard arguments March 4 from attorneys representing both Skinner and LPOSD, promising to deliver her decision as soon as possible, considering a trial date has already been set for April 28.

By the end of the hearing at the Bonner County Courthouse, district counsel Caitlin Kling, of law firm Hawley Troxell in Coeur d’Alene, made it clear that her client’s argument turns on a question of law, rather than fact.

Though LPOSD did fail to include a tax impact statement on the sample and Election Day ballots — a violation of Idaho statute — the challenge didn’t come until after the conclusion of the election. If that challenge had come before the election, Kling argued, the district would have been mandated by law to fix it. But, coming after the election, that law changes from “mandatory” to “directory,” meaning the results are only invalidated if a judge finds that the ballot defect was severe enough to alter the outcome one way or the other.

Applying the “mandatory” standard to challenges coming after the election would be a departure from Idaho law, Kling said, as the Legislature has not enacted any statute requiring so-called “strict compliance,” as Idaho courts have been reluctant to overturn elections “with good reason.”

“Strict compliance is not the standard in Idaho,” Kling said, adding that the plaintiff is therefore required to prove — not just assert — that the omission of the tax impact statement materially affected the result.

“The plaintiff cannot meet that burden,” she said.

Sandpoint attorney Stephen Smith, representing Skinner, zeroed in on what he called a “lopsided standard,” in which a challenge to the levy ballot language would have triggered an immediate, legally required fix prior to the election, but requires what he characterized as an “unwieldy” and “unthinkable” burden of proof after the fact.

Should the case go to trial, Smith said making the case that the missing ballot language affected the outcome would require issuing subpoenas to every voters who cast a ballot in the levy election and asking them whether knowing the tax impact would have changed their mind. What’s more, subpoenas would need to be issued to every elector who didn’t vote, asking whether the lack of tax impact information on the ballot made a difference in their decision not to go to the polls. Finally, his client would need to further depose LPOSD administrators to determine whether they omitted that language in good faith or in an attempt to mislead.

Aside from being an enormous number of depositions, the first two actions would violate voters’ constitutional rights — “So that’s a conundrum,” Smith said, adding that “we don’t think we should get there.”

Rather, he told the court, “right now we have a divided community,” and need a “common sense solution” to the issue.

“Re-running the election would be a common sense approach,” Smith added.

Kling returned to the district’s central argument that the statute requiring a tax impact statement on the ballot is directory after the election, and that the results stand unless a judge decides leaving out the language altered the outcome. It’s not the court’s responsibility, she added, to “go down the rabbit hole on the fairness of that.”

Characterizing the Legislature’s intent in requiring tax impact statements as informing voters about the “price tag” associated with ballot measures, Smith said many voters may not have even bothered to go to the polls because they didn’t think — because they didn’t know — that the levy vote would affect them financially.

For her part, Kling underscored that the district “has an obligation to uphold the will of the voters” and pointed out that the case — which began in December 2019 — is already “well beyond” the 30-day statutory limit for a trial contesting the outcome of an election.

Buchanan, who at the beginning of the hearing said she was “inclined to agree with the district’s position,” ended by saying, “I’m having a hard time seeing how we could have a trial proving the election results would have been different.”

Depending on whether Buchanan issues her ruling in the next week, the parties are scheduled to reappear at the Bonner County Courthouse for an 11:15 a.m. pretrial hearing on Wednesday, March 18 and the trial date remains set for Tuesday, April 28 at 9 a.m.