The granddaddy of all missed opportunities?

All of us miss opportunities. In 1989 my wife and I missed an opportunity to buy an acre of property on the lake for $80,000 because we were either naive or simply feared risk! 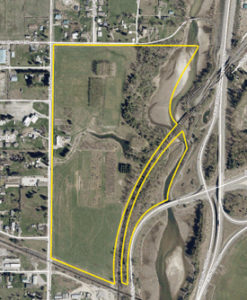 An aerial view of the University of Idaho extension campus. Courtesy photo.

The city of Sandpoint has missed some opportunities as well over the years. Right now, the city is not aggressively trying to keep the 77 acres on Boyer Avenue in the public’s hands.

In 2017 the city learned the University of Idaho was going to sell the property, after having closed its experimental agriculture station there in 2008. During that nine-year interim, the public fell in love with the green space for recreation and the beauty of the area along Sand Creek. It seemed UI was still a partner.

In a 2013 Daily Bee article, Mr. Charles Buck, director of northern facilities of UI, said, “This is a great location to (seek out local partnerships). It doesn’t do us any good and it doesn’t do the community any good to leave the property just sitting there.” Buck entertained offers from golf companies and experiential education companies such as Selkirk Outdoor Leadership and Education.

But, by 2017, partnership ideas had died. Dan Ewart, UI president of infrastructure, was quoted in the Daily Bee as saying, “I wanted to come here to be clear, the university does intend to dispose of that property.”

In 2018 the city tried to raise the money that the university wants (millions) and conducted a public workshop to consider the best uses of the property. They couldn’t raise the money, but the general consensus was to keep the as green as possible and that some of the land should be used for affordable housing, houses selling for $130,000 or less.

I believe there were three mistakes in that approach.

The 2018 comprehensive plan assumed that if you put deed restrictions on a developer’s private property, public needs can also be met

Good idea, but a developer can’t buy the property for millions, put millions more into it and not sell the project as a gentrified and expensive area.

More retail? Sandpoint already has lots of expensive commercial ground and has spent millions of dollars festooning downtown, and yet there is significant retail space available.

Moreover, the only way to provide significant numbers of affordable houses at a time is to form a large Community Land Trust where the land ownership stays in the public’s hands but the house is owned in perpetuity by the buyer.  When and if the owner wants to sell, their profit is capped so that the house remains affordable.  It works well because the costs of land and infrastructure are not part of the houses’ costs.

The assumption that UI can sell the property

Nominally, the UI owns the deed. But does it morally?

When in 1913 the Humbird Lumber Co. gifted the property to the land grant college, it did so with the provision that the university would bring experimental agriculture expertise to the community to help it grow. If not used for that purpose it was to revert to Humbird and the community. In 1954 when Humbird was on its deathbed, the UI got a quit claim deed, erasing the restriction of the gift.

We have seen this happen before with university land. Years ago, the UI managed the Clark Fork campus, 35 acres of forested land gifted by the U.S. Forest Service. For a long time, this campus provided a space for classes and retreats of all kinds.

Sometime in the fall of 2003 the UI, with no public input, sold the 35 acres for $450,000 to a hunting outfitter. Then publisher of The Bee, David Keyes, was irate and editorialized that the “sale of the field campus is a shameful move by U of I.”

Last year, Dennis Pence, former CEO of Coldwater Creek, gave 66 acres of prime land and improvements on North Boyer to the university. As a friend of mine said to me at the time, “How many years will it be until the UI sells this gift?”

The comprehensive plan undervalued what can happen on Boyer

Think of the possibilities for this property: Perhaps 100 new, truly affordable homes; more green space for pure enjoyment; and practicum education for U of I students in business management, recreation, architecture and engineering.

We have living in our community probably scores of innovative thinkers and doers. People who can turn the 77 acres into a site for “Experimental Green Solutions,” as builder Joe Sweeney refers to the possibilities (see, “Wilderfinde.com”). Cutting-edge projects that can be a new model of an “experimental station,” for jobs and wealth, as was originally imagined by Humbird Lumber Co.

I myself know of a local steam boiler engineer who can turn the county’s green waste at Colburn into steam on the Boyer site that could heat all the new housing.  Want low-cost electricity? We have the Brusaws of Solar Roadways who could provide snow-free and electricity generating, solar paneled streets for the housing.

Mr. Sweeney has developed low cost and fast ways of building homes out of straw bales, thus lowering the cost of the homes even more. He knows of a company out of White Fish, Montana, called “Algae Aqua” that might be interested in being here, too. “They have a power plant using sawdust, algae and aqua culture.”

Another innovative local developer, Randy Carne of Sagle, proposes that Sandpoint move its proposed regional sewer system to Boyer. The Gates Foundation developed for Third World countries a system that burns human and green waste that generates electricity on a relatively small footprint. The process has been industrialized by a company called Janicki Omni Processor (Sedron Technologies) and we might get Gates’ Foundation’s support here, too.

This property is truly a field of dreams. Deeding the property back to the city —it’s legal — could be a big win for the UI. Sandpoint has always been innovative and entrepreneurial. This Boyer Innovation Project could bring national and favorable publicity to the U of I and our city!