The future in black and white

What would you do with tomorrow’s newspaper today? This is the narrated theme that opens each episode of Early Edition, a four-season show that ran from 1996-2000 and followed main character Gary Hobson — played by Kyle Chandler, best known later as Coach Taylor from Friday Night Lights.

Gary is a regular guy living in Chicago, until one morning, he receives a copy of the Chicago Sun-Times at his door — along with an orange cat — and notices the date: tomorrow. Events covered in the newspaper haven’t happened yet, but as Gary finds out, they will happen, unless he takes steps to change the future. 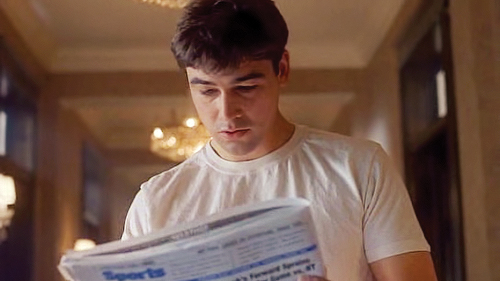 The explanation as to why this supernatural paper arrives at Gary’s door is only ever half-baked, with it remaining a mystery well into Season 2 — as far as I’ve been able to watch. Each episode launches our hero onto a mission to change fate, oftentimes saving people from train crashes and robberies. He is assisted by his two best friends — the occasionally insufferable Chuck, and Marissa, a blind woman of color who often serves as the guys’ moral guiding light.

Entertainment Weekly gave the first season a C rating in 1996, calling Chandler “such a likable sweetie that he almost makes Early Edition watchable.” It’s a harsh truth, but the show would have undoubtedly sunk after five episodes if not for Chandler. He’s an average, soft kind of handsome, with slanted eyes, a tall build and absolutely no sense of fashion, complete with a Southern accent.

What keeps his character so lovable — and what should baffle anyone with an understanding of successful character development — is that there are no clear factors motivating Gary to get up every day and save Chicagoans. His past is largely a mystery. He’s a young divorcee with no children, and quits his stockbroker job in the pilot episode. There is one early Season 2 episode in which he tries to be a “normal guy” and ignore tomorrow’s paper for a day, but he simply can’t. Gary is driven to do good things, and we don’t know why. Is there anything more heroic than that?

An AV Club critic argued that Early Edition was “held back by … the absurd coincidences that keep Chandler’s mission afloat, and his inability to come up with any better plan than to run to where trouble’s about to happen, and shout, ‘Hey! Stop!’”

This is a fair calculation, likely from someone who does not know how to have fun. The absurdity of Early Edition is its key ingredient. I mean, a cat brings this man a newspaper from the future. What ensues after that should be free from the binds of reality. Besides, Gary’s inability to plan ahead leads to golden episodes, like the time that he and Chuck sneak into the Chicago Bears’ locker room to stop the quarterback from sustaining coma-inducing injuries. What happens next is impossible, but a joy to watch.

The brilliance of Early Edition lies not in the production, or even in the storytelling, but in its sheer audacity. The show invites viewers to buy in by providing just enough mystery to keep things interesting, but also by creating characters who have a single, clear-cut goal: make life better for others. This mixture of unpredictability (‘Where will the paper send Gary next?’) and formulaic world-building (‘People are going to look out for one another’) is satisfying, if only because the news — particularly these days — feels so completely out of control.

Critics of the late ’90s and early ’00s did not have the foresight to know that a man who gets tomorrow’s newspaper today would be the hero we so desperately needed in the 2020s. Gary would not have hesitated to tear through airports early last year, tracking down carriers of the coronavirus and pleading with them to quarantine themselves.

“But sir, I have no reason to believe that these people need to be detained. I can’t hold them against their will,” the airport security would say. “How do you know they’re sick?”

Gary, pulling his newspaper from his brown leather jacket and silently re-reading the names of the infected people — yet to be released the next day, in a fictional world where, yes, the paper publishes typically privileged information — would breathlessly retort: “Don’t ask me how I know, OK? You wouldn’t believe me anyway. Just know that you’d be saving a whole lot of people from a whole lot of trouble.”

Find Early Edition on DVD at the library.