The evolution of camping

The pros and cons of sleeping on the ground, in a hammock, tent or glamper

There is nothing quite so refreshing as sleeping outside. I’ve always been a camper, but as the years go on, my camping has evolved to incorporate many choices of beds while experiencing the great outdoors. Here are some comparisons between sleeping on the ground, in a hammock, a tent and, finally, a glamper.

In my 20s, it seemed like I slept on the ground more than in a bed. I was a glutton for experience back then, soaking up misery and joy with the same sponge. I was camping every weekend, taking long excursions into the wilderness, hitchhiking hundreds of miles for nonsense reasons — all in the name of adventure. 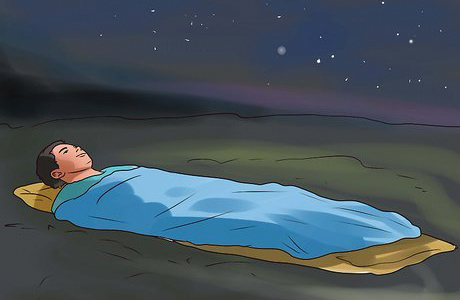 Though I owned a tent, more often than not I’d just spread a blanket on the ground after sweeping away the rocks and pine cones, lay my sleeping bag down and snooze under the stars all night. I always loved falling asleep after watching the satellites and meteors do their thing. Sometimes, when waking in the wee hours of the morning, I might catch a thumbnail moon rising over the mountains or a young buck deer drinking quietly from a stream.

Sleeping out on the ground is the purest form of camping. You are out in the elements, vulnerable to the bugs, wildlife and precipitation. Once, while sleeping at Rock Lake in Montana, I awoke in the morning to a mountain goat licking my face. Another time, I woke my sleeping partner in the middle of the night screaming, “Ants! Ants! They’re everywhere!,” but ended up quite embarrassed when I realized it was just a few ants crawling around on our skin and I was having a bad dream.

Then there’s the rain. Unless you’re under a tree or some other natural cover, you will get soaked sleeping on the ground if rain is in the forecast. I awoke one time completely exposed when it began raining. I did the only thing I could think of — I rolled myself like a burrito inside the tarp I was sleeping on top of and kept dry.

I came late to the hammock party. I’ve owned them before, but, until recently, never considered sleeping in them. They make some excellent camping hammocks that have bug netting along the top that you zip up when going to sleep. The netting is suspended from lines, which you tie further up the same trees the hammock uses, keeping it out of your face and creating a little vestibule. 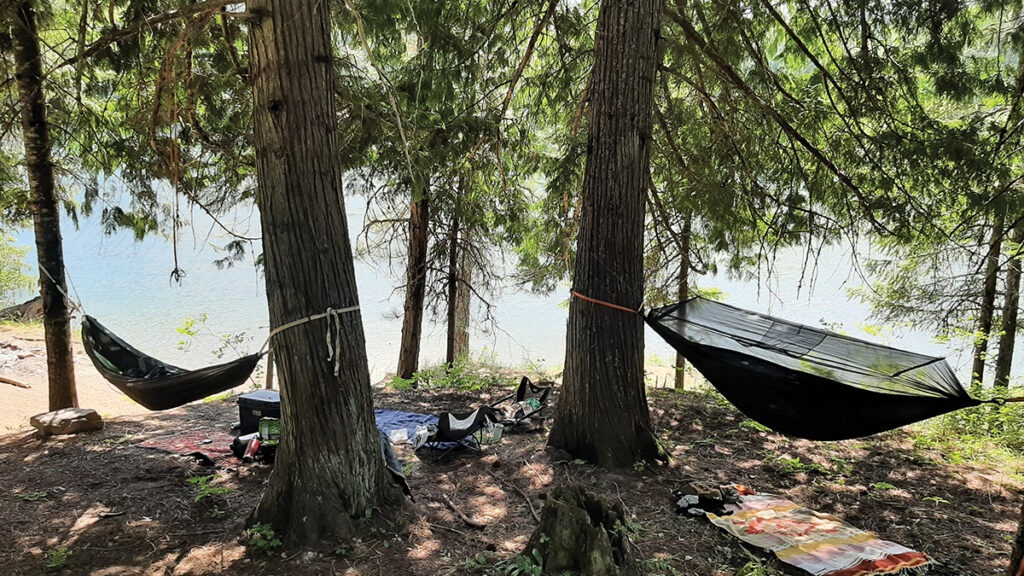 Hammocks are a step above sleeping on the hard ground. The netting protects you from the flying bugs, and being suspended keeps the crawling critters at bay, too (Ants!). Plus, the sway of a hammock is a natural sleep aid. Step up your game and include an inflatable ground pad in the bottom of the hammock to give it more structure so your back doesn’t sag so much, and also an underquilt which helps curb the cool air hitting the underside. Also, consider investing in some adjustable hammock tree straps for more versatility and strength.

The drawbacks are that you must have trees in your campsite, which isn’t a huge problem, but if you only bring hammocks and end up camping somewhere without trees in which to hang them, you’ll be reverting to sleeping on the ground.

When rain isn’t in the forecast, just sleep under the stars; but, if you’re worried about precipitation, string a line above the hammock from the same trees and use a tarp to make an A-frame rain shelter.

The most versatile and useful tool for camping outdoors is undoubtedly the noble tent. We have a couple of different sizes — one small, two-person backpacking tent and a large, mansion-like structure that could sleep an entire baseball team. 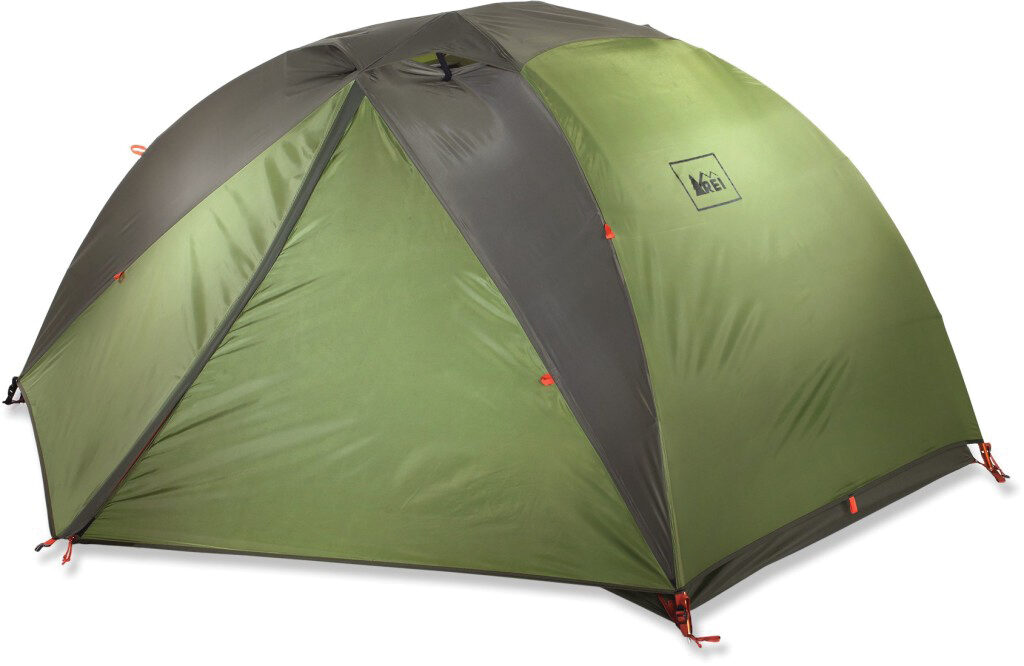 My best advice for buying a tent is to avoid the cheap ones. If you buy a cheap Walmart tent, chances are it’ll be trashed in a year or two. The materials are subpar and the stitching always fails at some point, creating access points for moisture and bugs.

I had a crappy $20 tent once while camping in Zion National Park and woke up in the morning to about three inches of standing water on the tent floor. The rain fly seams were so poorly sewed, they allowed water to freely flow within.

Do your research and get a tent with a good rain fly. You’ll thank yourself later. Also, make sure you get one that has good gear storage. Ours has a little mesh ceiling area in which to put your books, headlamps, toiletries, etc.

The cons of a tent are the space and weight. Unless you have a light backpacking tent, they can be heavy to strap onto your pack when voyaging in the woods — even the light tents are still heftier than a camping hammock. Also, you need the available square footage on which to place the tent, as well as ground that can accept stakes to help secure the tent. In some alpine excursions or in rocky areas, this might be tough to find.

The final evolution of a camper is when they go to the dark side and begin glamping. This hybrid form of camping is like traditional camping in the sense that you’re outside, but there is very little “roughing it” when it comes to glamping. 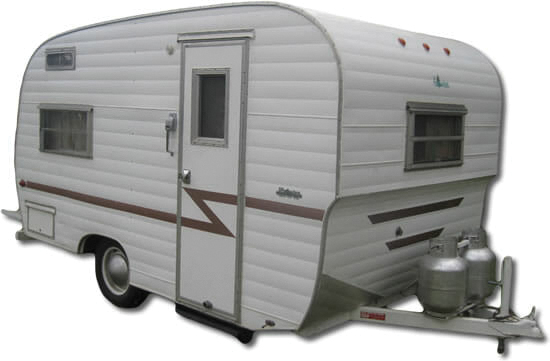 No judgment here, friends. To each their own. Glamping is when you take many of the luxuries of home and bring them to your campsite. Not everyone wants to come home filthy, smelling of smoke and scratching at a zillion bug bites.

We first bought our little 1965 Aloha camper to use as a band equipment trailer when going on tour, but it has evolved to become our glamper. It’s a simple affair, with a gutted interior only containing a settee area, which folds into a bed and a drawer built into the wall. We often pull the glamper by the river if we’re feeling a bit too lazy to rough it. Weight and space is never an issue, so we toss everything inside: Dutch ovens, firewood, musical instruments and anything else we might not normally have the chance to bring on a more traditional camping trip.

The glamper is excellent when it’s rainy or cold, too, because you can hang outside as long as you like, but close the doors and be cozy and warm inside no matter what the weather is like outside.

There are limitations for where you can tow the camper, and you give up a bit of the traditional nature of camping, but you gain a lot of comfort in the process. Plus, you don’t have to worry about setting up or taking down the tent — just pull up to the camp spot, crack a beer and you’re there, buddy.

No matter how you sleep outside, be it in a tent, swinging in a hammock, nestled in your camper or splayed out face first on the hard ground, the point is to be outside in nature, enjoying experiences your family will remember fondly.